‘I’m lucky to be alive!’ Terrifying moment hang glider pilot has to cling on for dear life after his harness comes unhooked in mid-air

A hang glider pilot has cheated death after his harness became unhooked in mid-air, forcing him to hold on to the frame for dear life.

The extreme sports enthusiast said he made a critical error during his setup which caused the harness to separate from the wing during the flight believed to be in California.

The footage shows the pilot preparing for the flight and he says he made his first mistake by connecting the carabiner to the velcro rather than the webbing. 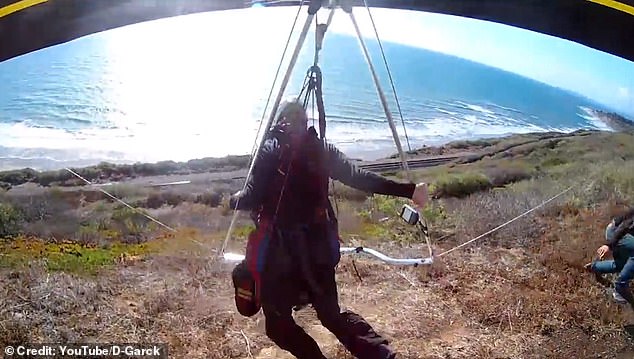 A hang glider pilot prepares to take off, unaware he had not correctly attached the harness

He didn’t spot this during his pre-flight checks so decided to take off.

Fortunately, he wasn’t happy with the grip on his gloves and ditched them just before jumping, a move which could have saved his life.

Despite being attached only by velcro, the glider oulot freely takes his hands off the bar shortly after taking flight by the coast with a road nearby.

All of a sudden, the harness came off the velcro and he quickly dropped but stayed on the bar thanks to his quick reflexes. 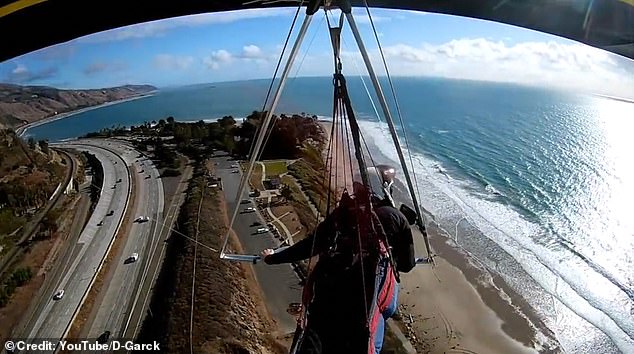 At first, all appears well after take-off and the glider even takes both hands off the bar at one point

Holding on only by his fingertips, he then crash landed on a beach and during which he tore a ligament and sprained other ligaments in his right knee.

The fortunate glider said: ‘I feel incredibly lucky to be alive.

‘Please be very vigilant when preparing to fly to avoid such an incident as this one.’ 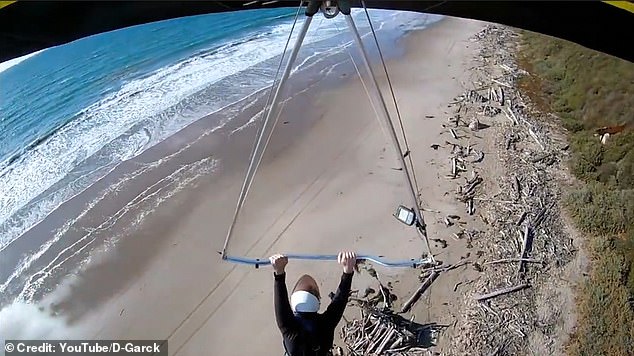 Holding on only by his fingertips, the glider then directs a crash landing towards the beach

He also explained that his crash landing came as he was flying into the wind, significantly slowing his speed and possibly avoiding more serious injuries.

He said: ‘Considering I used this hang loop setup for many flights in the mountains, this location is potentially the most fortunate place for such an incident to occur.

‘I can’t imagine having to hold on to the glider for much longer than I did. If this had occurred in the mountains, where the landing zone is much further away from the launch, I doubt that I would have had the strength to hang on for the duration of the flight out to the landing zone.’