As people across the UK are desperately awaiting rain during the drought, a weather forecaster warns the effect of showers will be minimal due to the persistent dry conditions.The Met Office has forecast isolated showers and thunderstorms tonight that could become more extensive over the next few hours, issuing a yellow thunderstorm warning.

It has warned against the potential for “frequent lightning, large hail and flash flooding impacts from the intense rainfall which could see values of at least 50mm in a two or three-hour period in a few places”.

However, WeatherTrending forecaster John Hammond warned Britons won’t breathe a sigh of relief despite the precipitation.

He told LBC’s Nick Ferrari: “We are going to go from one extreme to another. There is going to be some rain. For some of us, too much in a very short space of time. For others, just not enough.

“You know, we’re in a deficit of hundreds of millimetres of rain. Some places have not seen even 50 percent of the normal rainfall you would expect at this stage of the year.

“Well in the next few days, Nick, some places will pick up 10 or 20 millimetres of rain. That is a spit – a drop in the ocean. It’s going to scratch on the surface at this drought.” 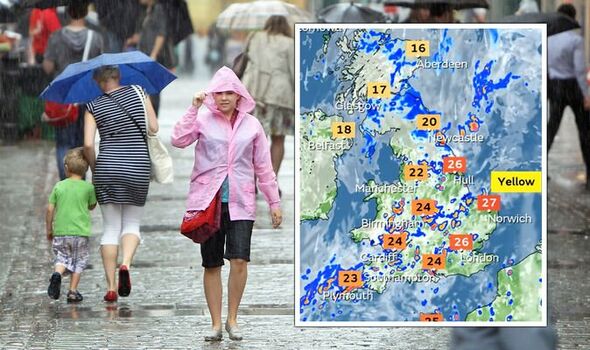 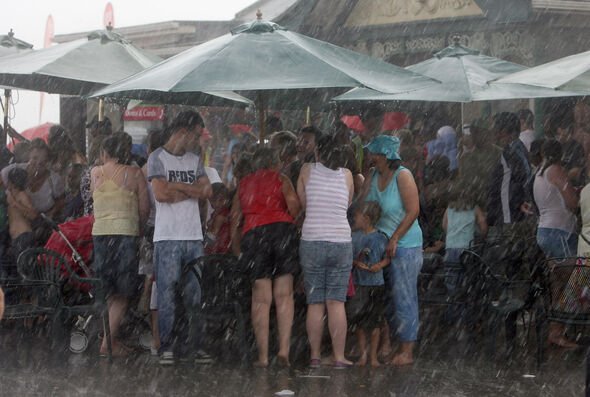 “But every drop counts, doesn’t it?” Mr Hammond said. “And so just take it sequentially through the next few days. Most of the rain today will be across parts of Scotland where rain is least needed.

“There will be some thunderstorms here. And a few storms will develop, Nick, across England and Wales. But very hit and miss. Possibility of flash flooding given the hardness of the ground.

“That rain won’t percolate deep into the ground. It will rush straight off. That’s the real concern over the next few days.”

The Met Office has warned Britons against travelling and community, as some heavy, thundery showers could strike on Monday. 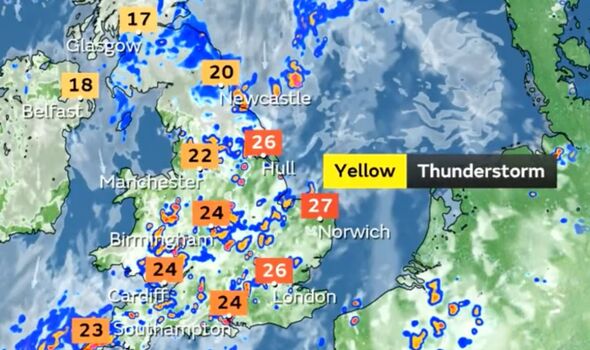 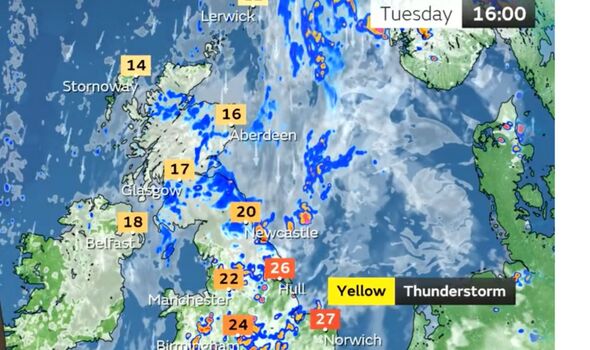 There was some rain across central and east Scotland on Monday, which will continue during Tuesday morning before fizzling out slowly.

England and Wales expect intense showers on Tuesday, with a risk of slow-moving showers and heavy downpours, hail and lightning.

Intense rainfall could see values of at least 50mm in a two or three-hour period in a few places.

Met Office’s chief forecaster Dan Suri said: “The change in weather regime will see the heat of the last few days slip away from the south and east, this will be increasingly replaced with more unsettled conditions with heavy showers, thunderstorms and torrential downpours being key hazards over the UK until Wednesday.”

DON’T MISS:
UK rain latest: Hail and lightning forecast but what time will it hit [REPORT]
Rain today: The exact time it will rain today – UK gardens get respite [REPORT]
Dog stretchered down Ben Nevis after refusing to walk any further [REPORT] 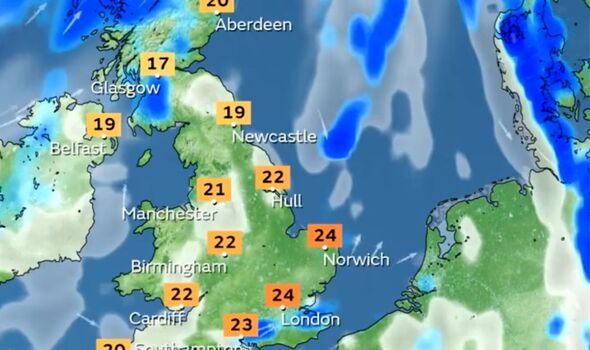 “Although not all places will be affected, where thunderstorms occur there is the potential for very large rainfall totals, but when that heavy rain is falling on extremely dry ground, the risk of flash flooding is much more pronounced,” Mr Suri said.

“With no meaningful rainfall in some southern locations since June, soils in these areas have become baked by the sun turning them into hard almost impenetrable surfaces. Any rainfall in these areas won’t be able to soak away and instead it will wash off soils and other hard surfaces, creating flash flooding in some areas.

“This excess water can rapidly inundate some flood-prone areas. Particular areas of cautions are low-lying stretches of road and those areas adjoining sloping fields where water can quickly run off, creating fast-emerging hazards.”

READ NEXT:
Storms for THREE DAYS: Weather warnings across UK as thunder and light
Met Office new storm alerts: Homes flood risk as heavy rain hits
Rain radar: How to see where it is raining in the UK right now
UK storm: ‘Danger to life’ as Brits to be lashed by 3 days of rain
Storm Tracker LIVE: Roundabout submerged as Brits brace for thunder