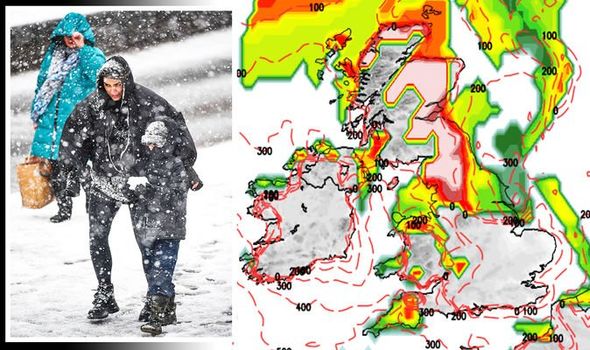 The Arctic deluge driven by savage easterly winds from Russia and the Baltic could leave parts of the country under eight inches of snow by Friday.

Freezing -12C winds could keep the UK in the freezer through the rest of the month and into February amid warnings it will be spring before the chill loosens its grip.

Weather charts show a wall of snow barging in from the Arctic on Thursday as public health officials extend a ‘severe weather action’ alert until the weekend.

Exacta Weather forecaster James Madden said: “A large area of snow is developing that will sweep southwards across the country from the middle part of the week onwards.

“This area of snow is likely to be quite persistent and deliver several hours of heavy snow in many places.

“Those regions at risk include northern and central regions at first and later southern England towards the end of the week.”

Government Health officials have extended a level-3 ‘cold weather action’ warning across northern England due to expire at the start of the week until Friday. 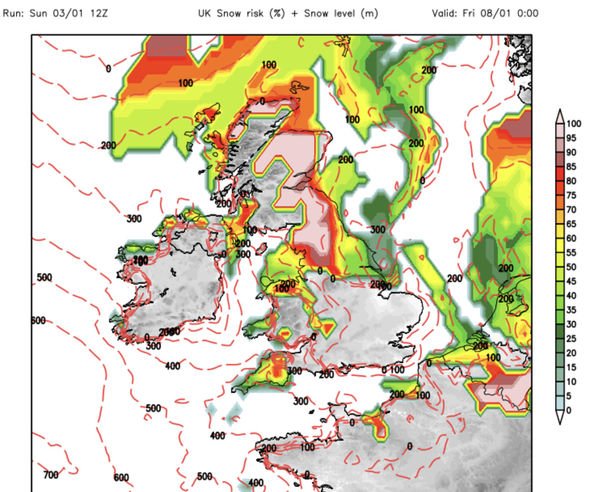 Another level-2 ‘alert and readiness’ alert will remain in force across southern England through the next four days.

It warns ‘severe cold weather’ and icy conditions may increase the risk to health and cause disruption to public services.

Dr Owen Landeg, PHE’s principal environmental public health scientist, urged people to take care and look out for those who may struggle during cold weather.

He said: “During this cold spell we all need to be looking out for frail or older neighbours or relatives, especially those living alone or who have serious illnesses.

“We still need to be aware of COVID-19 safety and local restrictions, but regular phone calls or socially-distant visits on their doorstep can make all the difference.”

Weather models reveal a growing risk of heavy snow across Scotland, northern and central Britain and Wales through the second half of this week.

Southern and eastern regions will fall into the firing line ahead of the weekend with downpours likely even to low levels.

Some models warn around 20cm, eight inches, could settle across parts of Scotland with several centimetres falling further south. 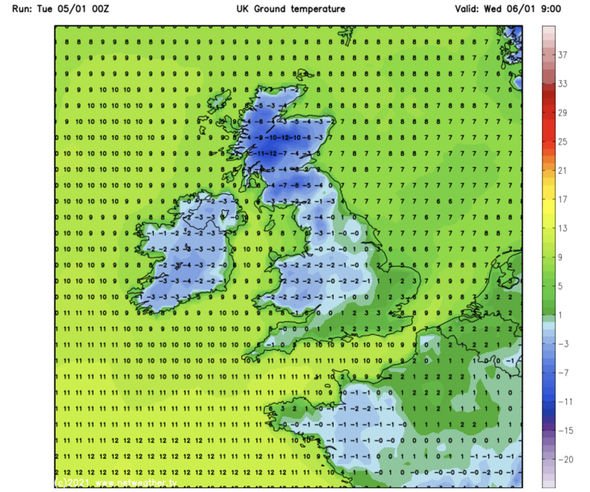 Drivers and those making essential journeys should take extra care and prepare for delays and road closures.

Mr Madden warned: “The conditions and temperatures are perfect for a large dumping of snow across the country and this is likely to bring travel disruption.

While the weather shows signs of turning slightly milder next week, it will largely remain cold and wintry through this month, he added.

He said: “Looking further ahead, wintry and heavy snow showers are likely for many, with temperatures staying cold for the time of year.”

Britain could be facing the worst winter deluge at this time of year since the big freeze of 2010/11, according to some forecasters.

It is likely to be driven in part by a warming of the stratosphere above the North Pole–a so-called Sudden Stratospheric Warming (SSW). 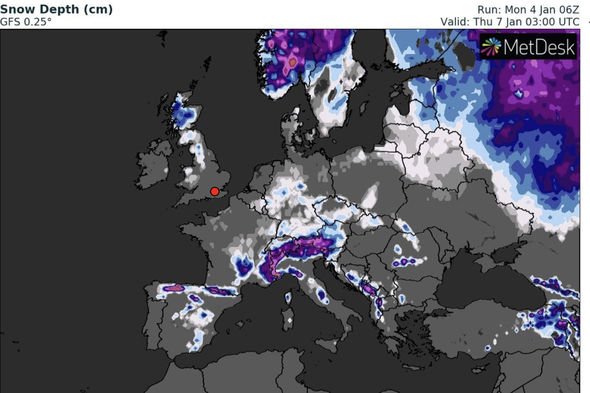 SSW was responsible for the killer Beast from the East winter freeze which ground the nation to a halt just before spring 2018.

A spokesman for Severe Weather Europe said: “An unusually strong warm wave [is heading] for the Arctic circle, raising surface temperatures more than 20 degrees above normal, pushing the cold air out of the Polar regions.

Jim Dale, meteorologist for British Weather Services, said: “This could be the biggest threat from the weather for a decade.

“It is not a beast from the east yet, but there are signs of an easterly influence with some of these conditions expected to come from Europe and Russia.

“The beast is stretching its claws towards Britain, there is the potential for major snow events which could also affect southern regions of the country.

“We could be looking at an extended polar blast.”

Daytime temperatures will struggle to raise much above low single figures over the coming days, according to the Met Office.

Chief meteorologist Steve Ramsdale warned bitter winds will make it feel even colder with snowfall turning widespread by the weekend.

He said: “Over the next few days temperatures are generally limited to between 3 to 7C by day and falling widely below freezing overnight with a brisk north easterly wind making it feel even colder for many.

“Snow and sleet are possible, particularly over higher ground in the north of the UK early in the week and perhaps further south towards the end of the week.”

“Temperatures are expected to start to recover as we go through the weekend and into the start of next week.”