Firefighting authorities will get new “high-tech” drones in their arsenal this year to better respond to natural disasters and industrial fires.

Emergency Services Minister Lisa Neville unveiled a new Fire Rescue Victoria aviation unit, based in Burnley, and four new drones that can fly as high as 120 metres, stay in the air for up to 30 minutes, and withstand windy conditions. 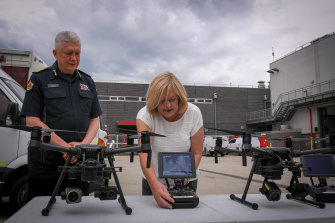 “Having this technology is going to be amazing for FRV … [as well] as supporting all our emergency agencies,” Ms Neville said.

“We know in the recent fire at Laverton … the technology was able to understand the nature of that fire, where the risks were and how to best respond to the fire and the best way to put that fire out as quickly as possible.”

Fire Rescue Victoria had a fleet of 10 drones, but the additional four will “uplift”its aviation unit’s capabilities.

The new drones will simultaneously carry both thermal and optical cameras, allowing firefighters to better monitor fires and other incidents from the air.

This will enable emergency services to identify “heat spots” in real-time, and deploy appropriate resources in a timely manner.

FRV aviation officer Wayne Rigg said his team would be allowed to fly their drones everywhere and not be hampered by aviation rules that prohibit recreational users from flying drones in certain areas.

“This is another tool in the toolbox,” Mr Rigg said.

“Drone capability is evolving constantly, and we need to lift our eyes to the horizon and look at what’s next, and this technology is now fantastic for us to bring into service.

There are 18 FRV staff who have been approved by the Civil Aviation Service Authority to fly drones, and 40 personnel in total in the aviation unit.