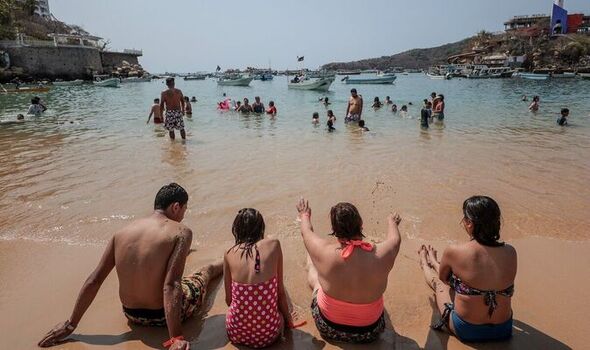 Mexican holiday goers were met with horror after the bodies of three tortured men washed up on the shores of two beaches over a single 24-hour period. The bodies appeared at beaches in the state of Guerrero, ruining the holidays of many beachgoers staying in the resort city of Acapulco. Authorities were called to the beach around midday on Saturday. Sunbathers had found the bodies of two men on the shores of Condesa Beach.

One of the bodies was strapped to a cement anchor, which was attached to his hand and foot. The other was simply lying face down on the sand.

Meanwhile, the following morning, holidaymakers at a beach just over a mile away had a similarly terrifying experience when a third victim washed ashore there.

Acapulco police said this man had been shot in the back of the neck before his body was dumped in the ocean.

According to local media, the three bodies had actually already been spotted floating near the beaches as far back as November 9 – several days before they appeared on the beach.

However, the police had been unable to find them.

The victims’ names have not been released.

Despite the horror that was unfolding, authorities kept the beach area open for those who wanted to stay.

In October, the US State Department warned American tourists to not visit the state of Guerrero, where Acapulco is located, because of crime concerns.

The State Department warned: “Crime and violence are widespread. Armed groups operate independently of the government in many areas of Guerrero. Members of these groups frequently maintain roadblocks and may use violence towards travellers.”

As of August, the Pacific coast beach resort city had registered 110.5 homicides per 100,000 people, making it second in the world behind the Mexican border city of Tijuana (138/100,00), according to data published by Statista.

Government data reveals that at least 213 murders were reported in Acapulco during the first quarter of the year. In all of 2021, 442 people were murdered in the city.