Hong Kong’s Cathay Pacific Airways Ltd said on Wednesday it would slash 5,900 jobs and end its regional Cathay Dragon brand, joining peers in cutting costs as it grapples with a plunge in demand due to the coronavirus pandemic.

The airline would also seek changes in conditions in its contracts with cabin crew and pilots as part of a restructuring that would cost 2.2 billion Hong Kong dollars ($283.9m), it told the stock exchange.

Overall, it will cut 8,500 positions or 24 percent of its normal headcount, but that includes 2,600 roles currently unfilled due to cost reduction initiatives, Cathay said.

“The global pandemic continues to have a devastating impact on aviation and the hard truth is we must fundamentally restructure the group to survive,” Cathay Chief Executive Officer Augustus Tang said in a statement.

“The future remains highly uncertain and it is clear that recovery is slow,” Cathay said in Wednesday’s statement. “The management team has concluded that the most optimistic scenario it can responsibly adopt is one in which, for the year 2021, the company will be operating at well under 50 percent of the passenger capacity it operated in 2019.”

Cathay’s announcement came a day after Hong Kong said its unemployment rate rose to 6.4 percent for the July-September period, its highest level in almost 16 years, from 6.1 percent from June to August.

The coronavirus has had a devastating effect on aviation. As many as 46 million jobs are at risk, and airlines alone face about $420bn in lost revenue this year.

Cathay was struggling with losses before the pandemic as anti-government protests in Hong Kong led to a sharp reduction in traffic last year and a change in management. The pandemic pushed the carrier into survival mode, forcing it to cut capacity and offer its staff voluntary no-pay leave.

The airline, which has stored about 40 percent of its fleet outside Hong Kong, said on Monday it planned to operate less than 50 percent of its pre-pandemic capacity in 2021. 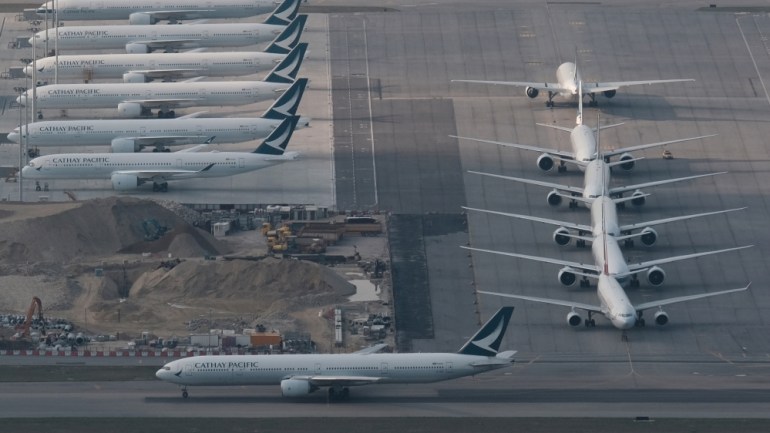 Cathay Pacific has stored about 40 percent of its aircraft outside Hong Kong [File: Tyrone Siu/Reuters]After receiving a $5bn rescue package led by the Hong Kong government in June, it had been conducting a strategic review that analysts expected would result in significant job losses.

BOCOM International analyst Luya You said she had expected a more strategic insight from the airline on its fleet plans and route network as part of the restructuring.

“Had they revealed more on fleet planning for 2021-22, we would get a much better sense of their outlook,” she said.

Cathay Dragon, once known as Dragonair, operated most of the group’s flights to and from mainland China and had been hit by falling demand before the pandemic due to widespread anti-government protests in Hong Kong that deterred mainland travellers. 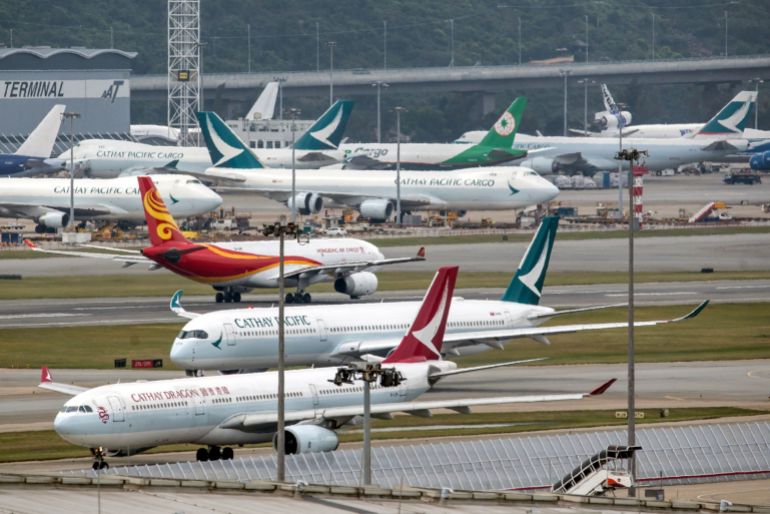 Cathay said the airline would cease operating immediately and it would seek regulatory approval to fold the majority of Cathay Dragon’s routes into Cathay Pacific and low-cost arm HK Express.

“Now that Cathay has decided on staff count and the elimination of the Dragon brand it knows the size of the airline and the structure going forward and can complete its new fleet and network plan,” said Brendan Sobie, an independent aviation analyst.

Like Singapore Airlines, Cathay lacks a domestic market to cushion it from the fall in international travel due to border closures.

In September, Cathay’s passenger numbers fell by 98.1 percent compared with a year earlier, though cargo carriage was down by a smaller 36.6 percent.

Singapore and Hong Kong said on October 15 they planned to open their borders to one another for the first time in almost seven months, with quarantine replaced by coronavirus testing. The travel bubble could start with one flight per day according to Hong Kong Secretary for Commerce and Economic Development Edward Yau.

Cathay shares have fallen 43 percent since the start of January. In July, it reached an agreement with Airbus SE to delay the delivery of A350s and A321neos and said it was in advanced talks with Boeing Co about deferring its 777-9 orders.