Experts warned that hospitals were being ‘crippled’ by the rules, which force patients into two weeks of quarantine even if they are only a close contact of a Covid sufferer.

Currently, most people have to isolate for as little as seven days if they test positive for Covid. If they are a close contact of someone with the virus, they no longer need to isolate at all if they are fully vaccinated.

But in hospital any patient who tests positive – or who comes into close contact with a confirmed case – has to be treated in isolation for 14 days. They have to remain in quarantine even if they later test negative.

Last night campaigners warned that the stringent regulations were having a ‘devastating’ effect on hospital capacity. They said that entire wards were being forced into isolation while the rules were making it difficult to move patients around within hospitals or to discharge them. 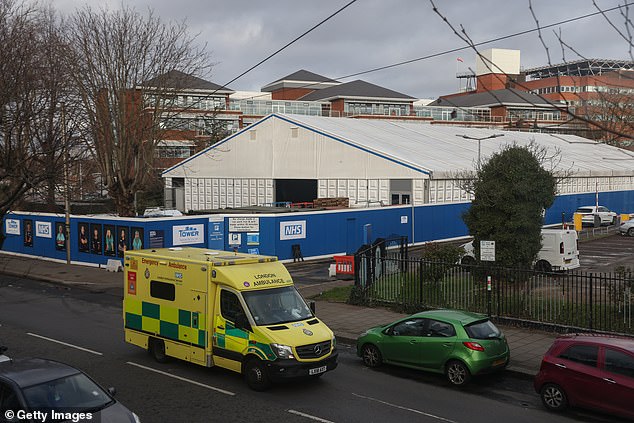 Experts warned that hospitals were being ‘crippled’ by the rules, which force patients into two weeks of quarantine even if they are only a close contact of a Covid sufferer (stock image)

It came as it emerged that 200 troops are being sent to London hospitals to fill in for NHS staff who are isolating after contracting Covid. The soldiers, including 40 specialist medics, were requested by NHS trusts.

The medics will help staff with patient care while other personnel will assist on wards and with duties such as checking in patients and conducting basic health checks. In other developments:

Hospitals’ stringent rules on Covid isolation were originally brought in to prevent the spread of Covid on the wards, but they have not been adjusted to account for the rollout of the vaccine or evidence that the Omicron variant is much milder.

The UK Health Security Agency is understood to be reviewing the guidance. However, last night experts called for action now. 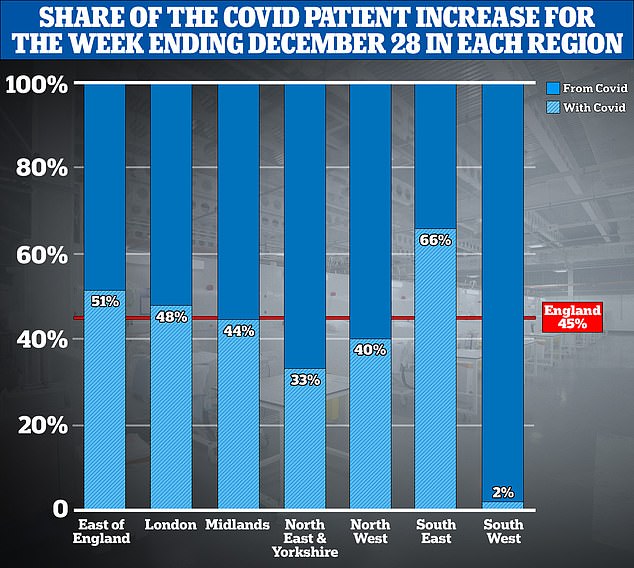 End quarantine for cases with no symptoms, says care boss

The boss of a major care home group last night called on ministers to scrap self-isolation rules completely for Covid cases with no symptoms.

With pressure mounting on ministers to relax the current seven-day requirement, the chief executive of Healthcare Management Solutions said the rules were no longer fit for purpose in a ‘highly vaccinated population’.

Tony Stein said at least 500 of 2,300 staff at his 60 care homes had been forced to isolate at some point despite most having no symptoms. It currently has more than 100 staff isolating.

He called on the Government to scrap isolation completely for those who test positive with no symptoms, saying the Omicron variant was ‘drastically milder’ and care staff were fully vaccinated – along with most residents.

‘It is time for the Government and public to accept that asymptomatic people shouldn’t isolate,’ he said. ‘Evidence suggests that if you’re double vaccinated and boosted – like all social care staff are mandated to be – you aren’t going to get seriously ill.

‘There is a flaw in the argument that the purpose of isolation is to prevent the NHS being overwhelmed.

‘Most people with Covid are not ending up in hospital and those that are are less ill and for a shorter time.’

Mr Stein said a lack of care staff due to isolation rules had caused a backlog of patients ready to leave hospital but with no place to go to. ‘This clearly has a knock-on effect and is preventing other patients from receiving treatment.’

Staff shortages also made it difficult to manage visitors to the detriment of those missing their families, he added.

It came as Matthew Taylor, chief executive of the NHS Confederation, said ministers should consider reducing the isolation period to five days.

Rory Deighton, of the NHS Confederation which represents the healthcare system, added that the quicker ‘learnings from Omicron’ could be translated into new national guidance ‘the quicker more beds and other capacity’ could be freed up.

Pat Cattini, a former president of the Infection Prevention Society, said the rules were ‘crippling healthcare’ but had ‘never changed’ despite vaccines and the evidence that Omicron was less severe.

Experts said that easing the 14-day quarantine rule would make a huge difference and free up beds. Current rules also force patients to isolate for 14 days if they are discharged into a care home from hospital – even if they test negative for coronavirus.

Around one in eight hospital beds in England, representing more than 10,000 patients, is occupied by people fit to leave, according to the latest figures.

At least 24 trusts have declared ‘critical incidents’ in recent days, warning that staff shortages caused by Omicron have made matters worse. But ministers have pushed back against claims hospitals cannot cope, with Environment Secretary George Eustice yesterday predicting the NHS’s problems would prove to be ‘quite short-lived’.

Elsewhere, some schools have provoked outrage by imposing a ten-day isolation period on pupils with Covid, despite the Government recommending seven. It came as a poll laid bare the extent of teacher shortages caused by Covid, with 36 per cent of schools seeing 10 per cent of staff stay away to self-isolate.

Other figures suggested the length of the average virus hospital stay had halved for some age groups due to vaccines and the milder Omicron.

Latest figures show there are 17,988 patients in UK hospitals with the virus, with admissions up 64 per cent in a week. However, the number in intensive care has not increased. And about one third of Covid patients were admitted for a different reason – testing positive for the virus ‘incidentally’ or catching it while in hospital.

But guidance means all these patients – as well as any non-Covid positive patients they were in contact with – must spend 14 days in isolation. Health chiefs are also being urged to review guidance stating that care homes should not admit new patients for 28 days after an outbreak of Omicron. This means many care homes have closed to new residents.

A UKHSA spokesman said of the 14-day rule: ‘The current guidance is in place to help limit the spread of Covid to vulnerable people and NHS staff. We continue to work in partnership…to review the guidance and will make changes where appropriate.’