London: As fighting rages between Azerbaijan and Armenia, an intense propaganda war is also being waged for the moral high ground, boosted by Azerbaijani oil revenues, social media and Armenia's large and vocal diaspora.

Within hours of hostilities reigniting around the Armenian-occupied enclave of Nagorno-Karabakh, the two sides' efforts to recruit official and public opinion went into overdrive — including from American reality TV star Kim Kardashian West, who is of Armenian extraction. 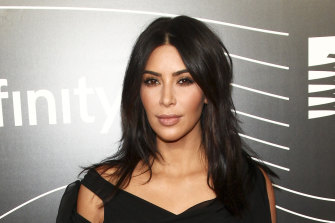 Kim Kardashian West, who is of Armenian heritage, has helped pushed the conflict in Nagorno-Karabakh into the spotlight.Credit:Invision

"Please share the news," Kardashian wrote in a series of tweets to her 67 million followers on September 27, the day fighting broke out. "Armenians in #Artsakh have been attacked," she said, using the Armenian name for Nagorno-Karabakh, and including links to a petition for the US Congress to "Sanction Azerbaijani War Crimes".

Since then, each side has produced videos of uncertain provenance to support claims that the other had either bombed civilian targets or enlisted "terrorists" to fight for them. 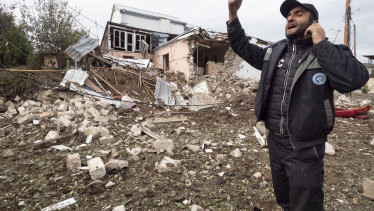 A man speaks on thephone near a house destroyed by shelling by Azerbaijan’s artillery in Stepanakert, self-proclaimed Republic of Nagorno-Karabakh.Credit:AP

In Azerbaijan's case, the alleged militants were sent by Turkey from Syria's war zone to aid the campaign against Armenians. Within Armenian ranks, supposedly, were ethnic Kurds from northern Syria, regarded as terrorists by Turkey.

News reports and a monitoring group in Syria have since provided support for the presence of Syrian mercenaries in Azerbaijan, and of casualties among them. There has been less evidence to support Turkish claims of Kurdish involvement.

Alongside more traditional lobbying of governments in Paris, Moscow and Washington by advocates for the warring parties, a range of lawyers, graduate students and businessmen have waged email campaigns to try to influence commentary.

The competing narratives have created a poisonous environment in which any middle ground is simply drowned out, according to Thomas De Waal, a London-based senior fellow and Caucasus expert at the Carnegie Europe think tank.

He has found himself under siege on Twitter, after a carefully balanced interview produced the headline: "Azerbaijan Moved In First".

"There's a very toxic information war going on, particularly on social media that I think is aimed not just at the other side but also at intimidating anyone with a message that favours peace," or indeed more nuanced histories, says De Waal.

"That's obviously dangerous because it makes it harder to find compromise."

In statements and interviews since the fighting began, Azerbaijan's President Ilham Aliyev has stressed the nearly 30-year Armenian occupation of the disputed territory. He says there can be no ceasefire until Armenia agrees to a timeline for withdrawal.

Armenian forces took control of Nagorno-Karabakh, a mainly Armenian-populated enclave within Azerbaijan, and seven surrounding districts in a war that ended with a Russia-brokered ceasefire in 1994, having cost 20,000-30,000 lives and displaced about 1 million people.

Armenia's Prime Minister Nikol Pashinyan has sought to focus international attention on Turkey's involvement, telling Sky News on October 5 that the renewal of hostilities represented "a policy of continuing the Armenian Genocide and a policy of reinstating the Turkish empire".

Turkey denies it's involved in the fighting, though it has offered full-throated support for Azerbaijan. Both houses of the US Congress in 2019 recognised the mass killings of as many as 1.5 million Armenians in Ottoman Turkey starting in 1915 as a genocide.

The historic tragedy may be one reason why the propaganda war between Armenians and Azerbaijanis can appear lopsided today.

Armenian survivors fled in large numbers, particularly to France and the US, where they and their descendants have campaigned for decades for worldwide recognition of the slaughter as a genocide. That has led to the establishment of a highly organised Armenian lobby in Washington, rivalling those of Israel and Greece.

Azerbaijan's lobbying network appears weaker by comparison. While it might once have benefited in Washington from the alliance with Turkey, the latter's influence has waned recently amid tensions with the US over Syria and defence purchases from Russia. Even so, Turkish President Recep Tayyip Erdogan retains a personal bond with US President Donald Trump.

Azerbaijan has its supporters abroad and revenues from oil and gas have allowed the country to raise its profile among governments and the wider global public, pushing back against its image as an autocracy with a poor human rights record.

In 2013, its government scored a sponsorship deal with Spanish soccer team Atletico Madrid, which emblazoned "Azerbaijan Land of Fire" on the team's shirts.