KNOWING the key coronavirus symptoms is the best way to catch it early and prevent spreading it to others.

But with new and potentially more infectious strains of Covid emerging, it's more important than ever to be aware of the signs. 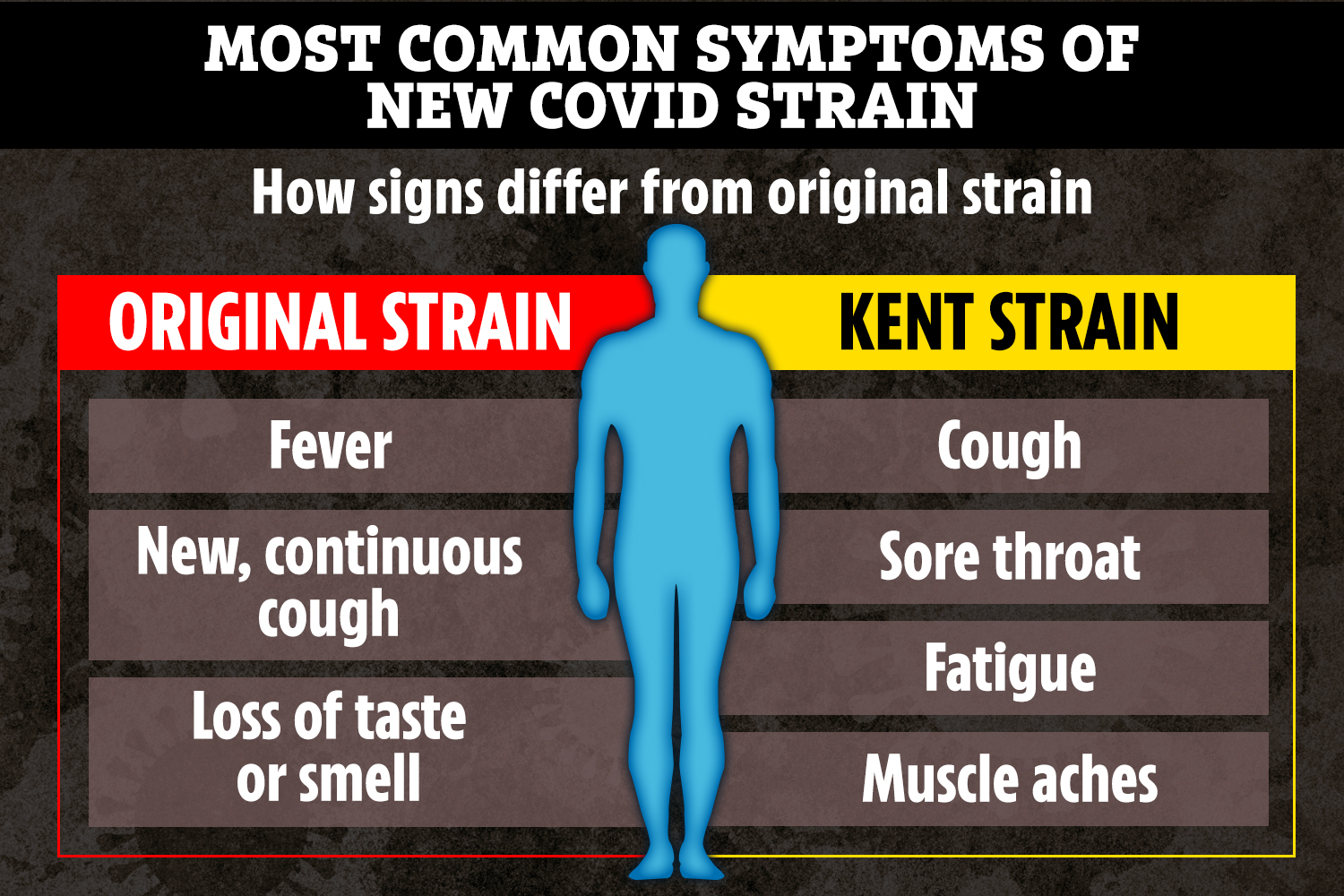 Most of the new variants have only evolved in the past few of months and so far experts have said it's not yet clear whether the symptoms differ.

However, a new Office for National Statistics report has revealed the most common signs of the UK variant aren't the same as the original variant.

People suffering with the Kent mutation, which first emerged in September 2020, are more likely to get a cough, sore throat, tiredness and muscle pain, according to the ONS.

This differs from the three official symptoms listed by the NHS for the original strain, which are a cough, fever and loss of taste or sense of smell. 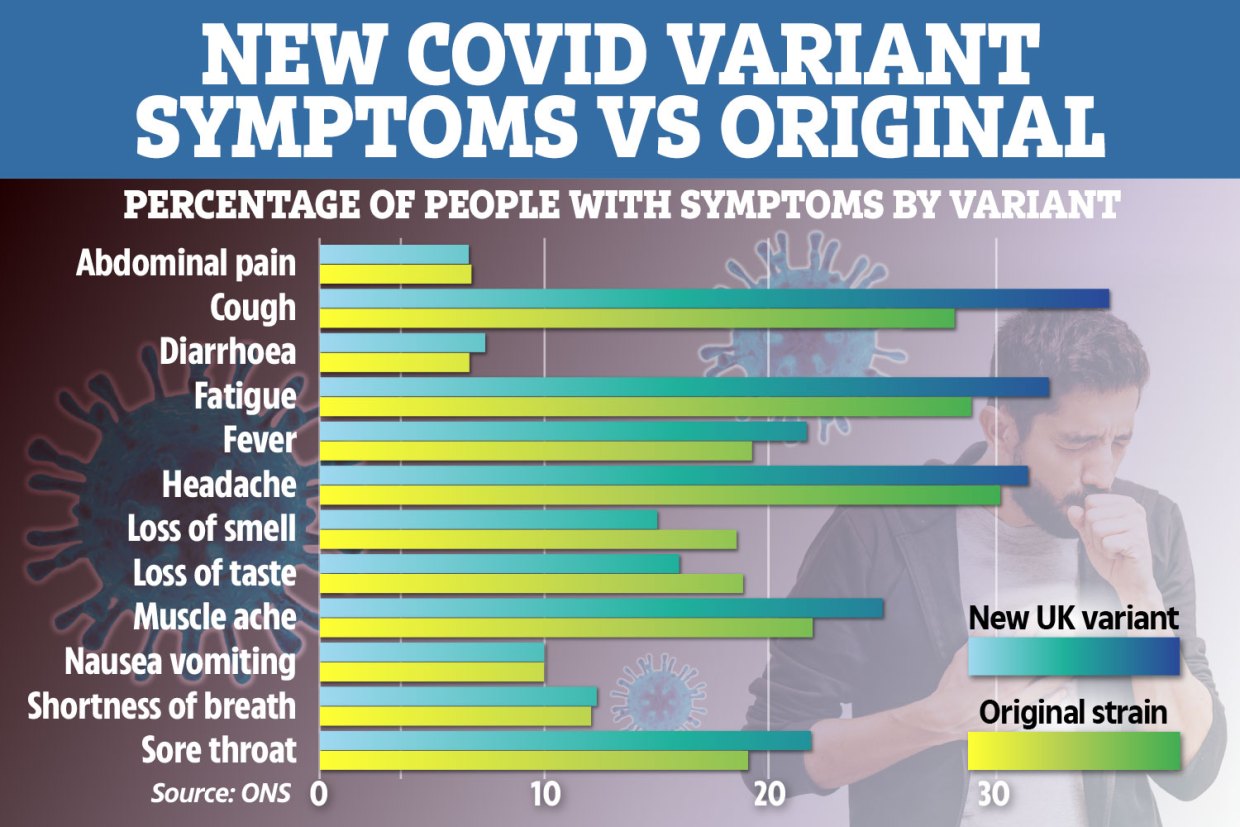 The report, released yesterday, said: "People testing positive compatible with the new UK variant were more likely to report any symptoms and the classic symptoms, but were less likely to report loss of taste and smell.

"There was no evidence of difference in the percentages reporting gastrointestinal symptoms."

The largest change in symptoms between the two strains is people are much less likely to report high temperatures.

The study found no real difference in reports of shortness of breath or headaches from patients with either the novel strain or the mutation.

What about the other variants?

As for the other known variants – including the South African and Brazilian strain – the Government haven't specified what the symptoms of the new strains are and research is ongoing.

After the other new variants were detected Chief Medical Officer, Professor Chris Whitty said that symptoms aren't any different to the strain already circulating across the UK.

So for the time-being officials have stated that people should continue to follow the guidance on the symptoms of the original variant.

Speaking previously, the WHO's technical chief, Dr Maria Van Kerkhove, said those infected with different variants had the same symptoms of the disease and there was no severity.

But she said the variant had increased transmission.

WHO's Executive Director Mike Ryan said the variant transmitted in the same way – through respiratory droplets from coughing or in the breath, and from infected surfaces.

The most common signs of Covid to look out for are a loss of taste and smell, a persistent cough, and a high temperature.

Meanwhile, the same measures of social distancing, face mask wearing and hand washing will still help to prevent you catching any strain of the coronavirus.

The NHS states that one of the three key coronavirus symptoms is a new, persistent cough.

This is defined as coughing a lot for more than an hour or three or more coughing episodes in a day.

If you usually have a cough then it will be much worse that your usual cough and it's likely to be more frequent.

It remains a key symptom of both the original and the new UK variant of coronavirus.

2. Loss of taste and smell

A loss of taste and smell emerged as a symptom of the original Covid variant late into the first wave last year.

Public Health England (PHE) only added anosmia to the official list of Covid-19 symptoms in May 2020.

It was already identified as a symptom by the World Health Organisation (WHO) at this point.

However, it wasn't on the ONS list of most common symptoms reported by those who had been infected with the new UK variant.

In fact the ONS said a loss of taste and loss of smell were significantly less common in new variant compatible positives than triple positives.

Another key symptom of the original Covid-19 variant – but not as common with the UK one – is a high temperature.

This means you feel hot to touch on your chest or back and the NHS states that you don't need to measure your temperature with a thermometer in order to check it.

If you do measure your temperature – a high reading would be classed as anything above 38C.

A high temperature is usually caused by your body fighting infection.

Fatigue isn't on the NHS's list of key symptoms for the original variant but is was reported more commonly for those infected with the new UK variant.

The World Health Organisation (WHO) lists tiredness as another key coronavirus symptom.

Many people who contract the virus say they don't feel as though they have the energy to undertake every day tasks in the same way that they could before.

Aching muscles or joints is reported in just 15 per cent of people with the original Covid virus.

Yet the ONS found it was much more common for people with the new UK variant.

Known medically as myalgia, 25 per cent of people reported suffering from muscle ache when infected with the Kent strain.

This compared with almost 22 per cent for those with the original strain.

People infected with the new UK variant reported experiencing a sore throat more often than those with the original.

The ONS report found 21.88 per cent of those testing positive for the Kent strain had a sore throat, compared with 19 per cent for the original.

According to the World Health Organisation, this is even lower for the novel coronavirus strain at just 14 per cent of those infected.