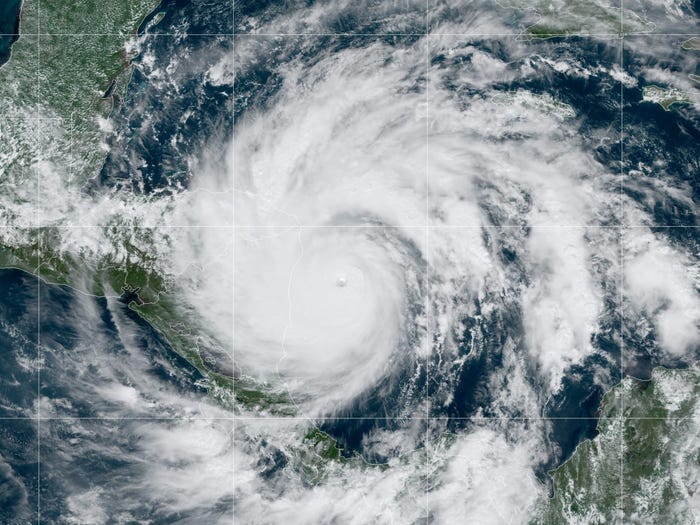 Hurricane Iota is now the strongest storm of 2020 so far — an unsettling achievement in this record-setting, relentless hurricane season.

The storm, which the National Hurricane Center is describing as "catastrophic" and "exceptionally dangerous," is moving west. It's set to make landfall in Nicaragua on Monday night — not far from the location where Hurricane Eta struck just two weeks ago. Its maximum sustained wind speeds are hovering around 160 mph, making it a Category 5 storm on the Saffir-Simpson scale.

"Just how strong is Category 5 Hurricane Iota?" Philip Klotzbach, a meteorologist at Colorado State University, tweeted on Monday. "Its current central pressure of 917 mb is lower than Hurricane Katrina's central pressure at the time of its strongest Gulf Coast landfall."

Iota is the first Category 5 hurricane of the season but the 30th named storm overall. It's expected to exacerbate the impact of Eta, which caused at least 50 deaths.

Iota has set several new records. It's the first storm with a Greek alphabet letter to reach Category 5 status. (Storms are named in alphabetical order, then switch to letters of the Greek alphabet.) It's also the latest-forming Category 5 hurricane seen since we began keeping records 170 years ago, and the second-strongest storm ever to form in November.

What's more, Iota makes 2020 the first year on record that four major hurricanes have formed in the Atlantic between October and November. This is usually a time of year when storms tend to weaken since oceans cool and winds pick back up. Besides 2020, only four other hurricanes ever on record have reached Category 4 status or higher in November. The most recent was Hurricane Eta two weeks ago; before that, it was Hurricane Paloma in 2008.

Additionally, Iota is this year's 13th hurricane, making 2020 the year with the second-highest number of hurricanes ever. Only 2015, with 15, had more.

The 2020 hurricane season has far surpassed researchers' most dramatic forecasts. In August, the National Oceanic and Atmospheric Administration predicted that the season would have up to 25 named storms and 11 hurricanes. With a couple weeks still to go, 2020 has seen five more named storms and two more hurricanes than forecasters expected.

Most of the year's storms also came earlier than their counterparts in previous years. Hurricane Isaias, for example, formed on July 30 — the earliest storm with an "I" name on record. Storms with "I" names don't usually form until October 4. Of the 29 other named storms in 2020, only three — Arthur, Bertha, and Dolly — weren't the earliest with their letter to form in history.

Research shows that climate change makes storms stronger and more devastating, since hurricanes feed on warm water. A single-degree Fahrenheit rise in ocean temperature can increase a storm's wind speed by 15 to 20 miles per hour, according to Yale Climate Connections.

Each new decade over the last 40 years has brought an 8% increase in the chance that a given tropical cyclone will become a major hurricane (Category 3 or above), according to a study published in May.

Similarly, a study from 2013 found that for each degree the planet warmed over the previous 40 years, the proportion of Category 4 and 5 storms  increased by 25% to 30%.

Climate change is slowing hurricanes' movement down: Over the past 70 years or so, the speed at which hurricanes and tropical storms travel has decreased about 10% on average, according to a 2018 study. That gives a hurricane more time to do damage in a given area. So it's not surprising that Iota is sluggish: It's moving just 9 mph.