Home » World News » Hurricane Zeta could hit Louisiana by Thursday. It’s the 27th named storm in this hurricane season, nearly the most ever. 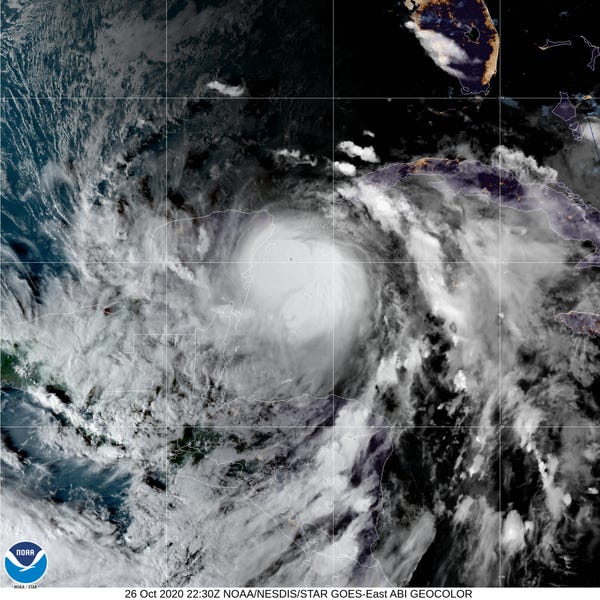 Hurricane Zeta is churning towards Mexico's Yucatan Peninsula, where it's expected to make landfall on Monday evening. After that, forecasts suggest the storm will head toward the US Gulf Coast, parts of which are still reeling from Hurricanes Laura and Delta.

As of Monday at 5 p.m. ET, Hurricane Zeta was located 90 miles south of Cozumel, Mexico, and moving northwest at 10 mph. Its maximum sustained winds of 80 mph make it a Category 1 hurricane.

"Hurricane conditions and dangerous storm surge are expected in portions of the northern Yucatan Peninsula," the National Hurricane Center warned on Monday.

A hurricane warning is in place for parts of that peninsula, including Cozumel and the area from Tulum to Dzilam. A hurricane watch is in effect from Morgan City, Louisiana, to the Mississippi/Alabama border.

Possible landfall in a region already battered by storms

Zeta is expected to weaken as it passes over the Yucatan Peninsula, but the NHC said it's likely to strengthen again as it passes through the warm waters of the Gulf.

The storm is expected to make landfall in Louisiana late Wednesday evening "at or near hurricane strength."

As Zeta approaches the Gulf Coast, heavy rainfall and winds could provoke "possible life-threatening inundation" along the zone between Intracoastal City, Louisiana, and Navarre, Florida. Parts of Louisiana could see a wall of water up to 6 feet high.

The Atlantic hurricane season has already hit the US Gulf Coast hard this year. Hurricane Hanna flooded streets and caused nearly 60,000 power outages in Texas in late July. In August, Hurricane Laura, a Category 4 storm, killed at least 33 people and caused more than $14 billion in damage as it tore through southern Louisiana, according to a report from insurance company Aon.

Then in September, Hurricane Sally killed four and caused extensive damage in Florida and Alabama.

Hurricane Zeta, which gets its name from the 6th letter in the Greek alphabet, is the 27th named storm in this year's Atlantic season. That's the second-highest number ever.

The 2005 season still holds the record: It had 28 including a subtropical storm that didn't get an official name. So 2020 has just one more storm to go before it ties 2005.

There's still plenty of time, since more than a month remains in this year's hurricane season, which officially ends November 30.

Each new decade over the last 40 years had brought an 8% increase in the chance that a given tropical cyclone will a major hurricane (defined as Category 3 or above). A 2013 study found that for each degree the planet warmed over the previous 40 years, the proportion of Category 4 and 5 storms increased by 25% to 30%.

"Almost all of the damage and mortality caused by hurricanes is done by major hurricanes," James Kossin, an atmospheric scientist at NOAA, told CNN in May. "Increasing the likelihood of having a major hurricane will certainly increase this risk."

Storms are also getting more sluggish. Over the past 70 years or so, hurricanes and tropical storms have slowed about 10% on average, according to a 2018 study. That gives a hurricane more time to do damage in a given area.

"We have a significantly building body of evidence that these storms have already changed in very substantial ways, and all of them are dangerous," Kossin told The Washington Post.