Home » World News » ‘I thought we were going to die’: Stranded outback couple saved after days without food, water

A couple and their dog have had an incredible chance rescue after they walked more than 40 kilometres in the sweltering heat of the South Australian outback without food and water, stopping to leave notes and etch "SOS" on a dirt road along the way.

José Merlos, 29, Nicky Wong, 32, and their dalmatian puppy Loki were driving from Cairns to Adelaide and planned to detour through NSW when their plans changed due to coronavirus border closures. 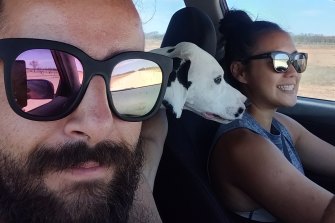 On January 3, they were driving along a remote outback road after taking a wrong turn when their Toyota RAV4 became bogged in sand. They attempted to get the car out for several hours, then abandoned it and started walking.

The pair left a note to say they were walking to the tiny town of Innamincka in South Australia's north-east. As they walked for hours, and the temperature climbed to the high 30s, the couple left more notes. Exhaustion set in, and they paused to scratch "SOS" into a dirt road.

"It was so hot, and we were scared, I thought we were going to die," Mr Merlos said.

"My phone said 'SOS' only, and I kept trying over and over again to call for help, but the call wouldn't go through. 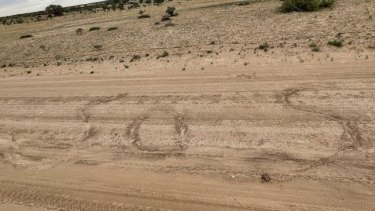 "I was worried my fiancé Nicky wouldn't make it as she was needing more and more breaks to rest, and I had to beg her to keep walking."

The pair became so dehydrated they didn't have enough saliva to swallow the food they had with them. They hardly spoke because their mouths were so dry, with Ms Wong struggling to walk.

Desperate for some hydration, Mr Merlos attempted to drink his own urine, as well as muddy water from a cow trough and water leaking from a solar panel. Loki, an energetic puppy who is not yet a year old, remained fine throughout the ordeal apart from being slightly dehydrated.

After two days, the couple was saved when a man only known as Craig, a remote worker for energy company Santos, came across them at a satellite station. He gave them food and water and drove them to Innamincka to recover. 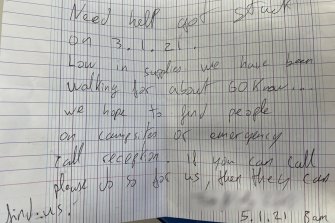 One of the notes left by the pair.Credit:Royal Flying Doctor Service

"Craig told us he only took that road once every six weeks, and we had another 25 kilometres to walk to get to Innamincka. If he hadn't found us, we would have perished," Mr Merlos said.

The pair were taken to the Royal Flying Doctor Service remote clinic where they were checked over by nurse practitioner Chris Belshaw, who found them to be "a bit emotional" but in "remarkably good physical condition". Their car was later retrieved with the help of a ranger.

"We are so grateful for Craig and the Flying Doctor, we wouldn't be here without them," Mr Merlos said. "I will never view life the same again, we are lucky to be alive.

"If we had to travel in the outback again, we would buy a satellite phone, and make sure the authorities in the town ahead knew to expect us." 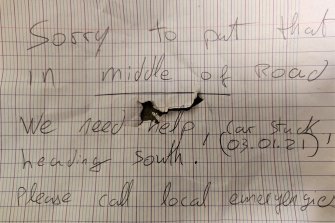 The notes asked for passersby to call for help.Credit:Royal Flying Doctor Service

Mr Belshaw said the pair were lucky the temperature was only in the high 30s, which is "lower than usual".

"Usually it is 45 degrees at this time of year. If it was the normal temperature then I believe they would have perished," Mr Belshaw said.

In a statement on Thursday, the Royal Flying Doctor Service urged people to take more precautions when driving in the outback, including taking physical maps, bringing a satellite phone (which can be hired) and tools to dig yourself out, and packing enough spare water for four days.

"If you break down, stay with your vehicle," the service said. "A vehicle stuck in mud or sand is easy to see from the air in the station choppers, you have more chance of being rescued alive if you stay put."

Get our Coronavirus Update newsletter

Stay across the news you need to know related to the pandemic. Sent Monday and Thursday. Sign up here.