Of the 41,700 or so men and women currently detained in Australia’s prison systems, almost 30 per cent are Aboriginal or Torres Strait Islander people. Yet Indigenous people make up only about 3.3 per cent of the broader population. This grossly disproportionate incarceration rate has been highlighted repeatedly over the past several decades because it points to fundamental inequities within our nation. 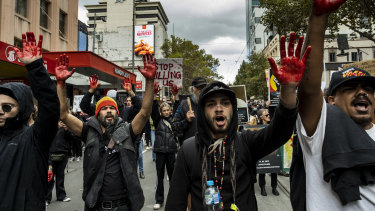 Protesters march in Melbourne on Saturday over Indigenous deaths in custody. Credit:Getty Images

Coming into contact with police, being accused of offending, negotiating the justice system and weathering time in a detention centre is personally traumatic and can have a dreadful impact on families. For that reason alone, having so many of its men and women in custody at any time is a wholesale tragedy for the Indigenous community.

Based on current custody figures, it would seem that little has changed in the 30 years since the landmark Royal Commission into Aboriginal Deaths in Custody handed down its final report. While the commission was convened to consider the circumstances behind numerous Aboriginal deaths in custody, it ultimately found Indigenous people are not more likely to die in prison than someone from a non-Indigenous background. It did find many of the deaths in the 1980s arose from a lack of appreciation of the duty of care that is owed when someone, anyone, is taken into custody.

However, it is the rate at which Aboriginal and Torres Strait Islander people come into contact with the police, justice and prison systems that was then, and remains today, of enormous concern. Indigenous people tend to encounter the police and corrections systems more often than any other sector of the population, both as victims and offenders, and the reasons are multifaceted and profound. They come from deep, inter-generational trauma. Having children stolen from your arms, taken away to be indoctrinated; having your land, your country and your community seized; having your story negated, your culture erased by newcomers. These are the enduring scars of this nation’s history.

For the signatories of the 2017 Uluru Statement from the Heart, the fact that so many Indigenous people end up in custody is continued affirmation of what the royal commission said decades before. Here is evidence, if any were needed, of the structural problems that generations of trauma and dispossession has wrought on First Nations people. The Uluru Statement pointedly refers to the “obscene” detention rates for Aboriginal youths while entreating the world to understand that Australia’s Indigenous people “are not an innately criminal people”.

The high custody rate was highlighted by the Australian Law Reform Commission’s 2018 report, which made numerous recommendations for reforms by the Commonwealth, states and territories to reduce the prospect of Indigenous people entering the police, justice and prison systems.

Since 1991, there have been incremental changes in justice, policing and corrections in every state. But some, inexplicably, are still a long way from implementing some of the most fundamental and practical changes recommended by the commission.

It took until February of this year, and the death in custody of Yorta Yorta woman Tanya Day, for the crime of being drunk and disorderly in public to be erased from Victoria’s Criminal Code. Yet the change does not take effect for another 19 months.

That is not to suggest the system here is anywhere near perfect. Aboriginal people are still over-represented in the prison community in Victoria, and the proportion has been rising over the past decade. Thirty years ago, Australians would have hoped for better than incremental improvements and stubbornly high incarceration rates.

Saying sorry is valuable for the spirit, but it is not enough in itself. Real and tangible changes can only come by improving health, economic and social outcomes for Indigenous people, and by implementing necessary and practical legal changes. The longer the situation is allowed to persist, the more urgent it is to address it.

Note from the Editor

The Age’s editor, Gay Alcorn, writes an exclusive newsletter for subscribers on the week’s most important stories and issues. Sign up here to receive it every Friday.