Donald Trump’s claim that PM Narendra Modi had asked him to mediate with Pakistan on Kashmir sets off a storm in India. 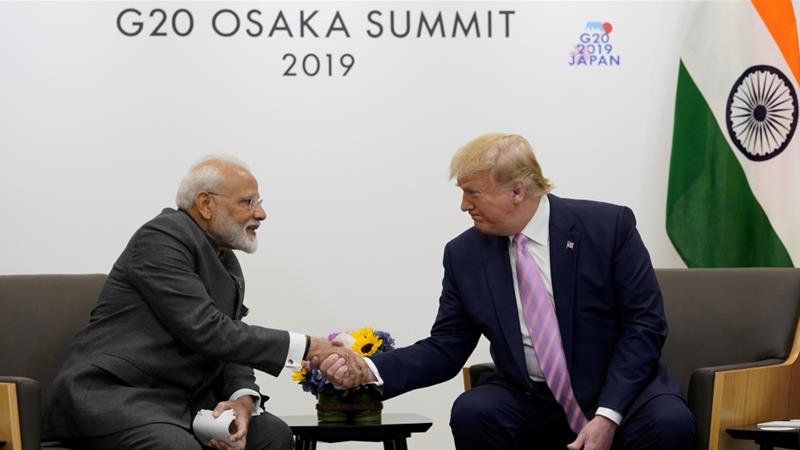 Trump told reporters on Monday that Modi had asked him, during a meeting in Japan last month, if he would like to be a mediator on Kashmir, which is at the heart of decades of hostility between India and Pakistan.

But Foreign Minister Subrahmanyan Jaishankar, who was part of the Indian delegation at the G20 meeting in Japan where Trump and Modi met, rebutted that claim and told agitated legislators on Tuesday that Modi did not seek any help from Trump over the divided Himalayan region.

“The US president made certain remarks to the effect he was ready to mediate if requested by India and Pakistan. I categorically assure the house that no such request has been made by the prime minister, I repeat, no such request was made,” he told India’s parliament.

Trump was speaking at the White House just before he sat down for talks with Pakistani Prime Minister Imran Khan, who welcomed the US effort to intercede, saying he would carry the hopes of more than a billion people in the region.

But the US leader’s comments triggered a political storm in India, which has long bristled at any suggestion of third-party involvement in tackling Kashmir, a Muslim-majority region that it considers as an integral part of the country.

Soon after Trump’s remarks, the US State Department said in a post on Twitter that it supported any dialogue between India and Pakistan but that Kashmir was a matter for the two countries.

“While Kashmir is a bilateral issue for both parties to discuss, the Trump administration welcomes Pakistan and India sitting down and the United States stands ready to assist,” said Alice Wells, the acting assistant secretary of the department’s Bureau of South and Central Asian Affairs.

Jaishankar said there could be no third-party involvement in India’s problems with Pakistan.

“I also reiterate that it has been India’s position that all outstanding issues are discussed only bilaterally. I further underline any engagement with Pakistan would require an end to cross-border terrorism,” he said.