Milan: Italian workers in both the public and private sectors must display a health pass to access their workplaces from October 15 under a decree adopted on Thursday by Premier Mario Draghi’s broad-based coalition government.

The measures are the first by a major European economy requiring proof of vaccination, a recent negative virus test or recovery from COVID in the previous six months for all categories of workers. 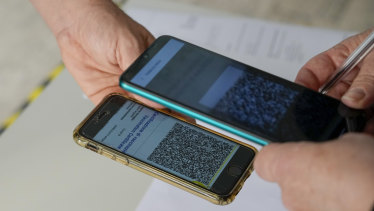 A teacher, left, has her so-called “Green Pass” checked by a school worker as she arrives at a high school in Rome. Credit:AP

“The Green Pass is an instrument of freedom, that will help us make workplaces safer,” Health Minister Roberto Speranza told a press conference. “The second reason is to reinforce our vaccine campaign.”

Slovenia and Greece adopted similar measures this week. But Italy’s €2-trillion ($3.2 trillion) economy, the third largest in the European Union, is a far larger target, and the measure underscores the government’s determination to avoid another lockdown even as the numbers of new virus infections creeps up, mostly among the unvaccinated.

Ministers said the measures were aimed at reinforcing Italy’s economic recovery, with GDP forecast to grow 6 per cent this year, at a critical moment in the pandemic as schools reopen and cooler autumn weather moves more activities indoors, where the virus spreads more easily. They also expressed concern about the impact of any possible new variants.

Workers face fines up to €1500 euros and employers up to €1000 if they do not comply. Public sector employees risk suspension if they rack up five absences for failure to show up with a Green Pass; private sector workers can be suspended after the first failure. 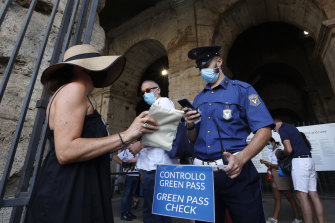 Tourists have their “green pass” checked by security staff at the entrance of the Colosseum in Rome.Credit:AP

The measures remain in effect as long as Italy is in a state of emergency, currently until December 31.

Labour Minister Andrea Orlando said that no one risked being fired if they didn’t present a Green Pass, and the public administration minister, Renato Brunetta, acknowledged that checks in some workplaces would have to be random.

“It is very likely that the effect of the announcement will already bring in the next four weeks an acceleration in Green Passes, yes, but also of vaccinations,” Brunetta said. “The result could already be achieved, or partially achieved, or perhaps — optimistically — exceeded, before the decree even takes effect.”

Italy surpassed the threshold of 80 per cent of the eligible population having received at least one dose of the vaccine this month, with more than 81.7 million vaccine doses administered through Thursday. Three-quarters of the population, or 40.5 million people, are fully vaccinated.

While the Green Pass was supported by parties across the political spectrum, critics have signalled concerns about a gradual and ongoing erosion of civil liberties during the pandemic. Court challenges are likely, as the right to work is enshrined in Italy’s constitution.