Vienna: Iran has finished moving a first cascade of advanced centrifuges from an above-ground plant at its main uranium enrichment site to an underground one in a fresh breach of its nuclear deal with big powers, a UN atomic watchdog report showed on Wednesday.

The transfer to the underground plant apparently built to withstand aerial bombardment was done in response to the burning down of an above-ground centrifuge-building workshop at Natanz in July, which Tehran has called an act of sabotage. It also slowed Iran's output of enriched uranium, the report showed. 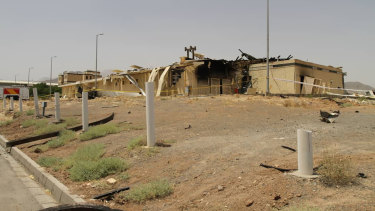 The move was the latest of many deliberate breaches by Iran of its 2015 deal with major powers in response to Washington's 2018 withdrawal from the landmark accord and its reimposition of sanctions against Tehran. The deal says the underground plant at Natanz can only be used for first-generation IR-1 machines.

"They finished installing one of the three cascades and they have started installing a second cascade," a senior diplomat said, adding that while they were being moved, these more efficient and productive machines were not operating as yet.

A cascade is an interlinked cluster of centrifuge machines.

Iran's stock of low-enriched uranium is now far above the deal's 202.8 kg limit at 2.4 tonnes, but it produced 337.5 kg in the quarter, less than the more than 500 kg recorded in the previous two quarters by the International Atomic Energy Agency.

Iran had previously informed the IAEA that it would transfer three cascades of advanced centrifuges at Natanz underground. The first, of IR-2m machines, is installed and connected but has not been fed with uranium hexafluoride gas, the feedstock for centrifuges, according to the report, obtained by Reuters.

The Islamic Republic has started installing a cascade of IR-4 machines in the underground plant but not the third cascade of IR-6 ones, the report said.

The 2015 deal was designed to extend the time Iran would need to produce enough fissile material for a nuclear bomb if it chose to do so to at least a year from 2-3 months.

Iran has told the agency that it aims eventually to "concentrate" all its enrichment research and development – a term usually reserved for advanced centrifuges – in the area of the underground enrichment plant, the report said.