Iran has reassured its neighbour, Azerbaijan, that it recognises its territorial integrity as it reiterated calls to resolve a deadly conflict with Armenia over the contested Nagorno-Karabakh region through talks.

“The stance of the Islamic Republic on Azerbaijan has always been clear and transparent as it has always recognised the neighbouring country’s territorial integrity and respected it,” Mahmoud Vaezi, President Hassan Rouhani’s chief of staff, told Azerbaijani Deputy Prime Minister Shahin Mustafayev in a phone call on Wednesday.

“We believe the end of occupation will bring stability to the region,” the Iranian official was quoted as saying by the government’s website.

In a separate development on Wednesday, Rouhani, in a phone call with Armenian Prime Minister Nikol Pashynian, called on Armenia to work toward ending the conflict and hold dialogue.

“Our region can no longer take instability and new wars,” Rouhani said.

“Our wish is to immediately stop the clashes and for us all to resolve the region’s issues through political discourse and international laws.”

Pashynian reportedly agreed that armed conflict is to the detriment of the region and expressed concern about foreign interference in Armenian disagreements with Azerbaijan.

Nagorno-Karabakh is a breakaway region inside Azerbaijan that is controlled by ethnic Armenians backed by Armenia and has been the subject of several UN resolutions calling for an end to the occupation of Azeri lands. It broke away from Azerbaijan in a war during the 1990s but is not recognised by any country as an independent republic.

Vaezi stressed that Azerbaijan holds an important place in Iranian foreign policy and said Tehran will always strive to develop and boost bilateral ties with its neighbour.

He also reiterated Iran’s deep concern regarding the armed conflict, saying the country was ready to mediate between Azerbaijan and Armenia to begin negotiations “within the framework of international laws”.

Shortly after the latest clashes erupted, Iran called on the two sides to exercise restraint and work towards dialogue.

Iranian Foreign Minister Mohammad Javad Zarif has had separate phone calls with his counterparts in Armenia and Azerbaijan on Sunday, in which he urged them to hold talks within the framework of international law. 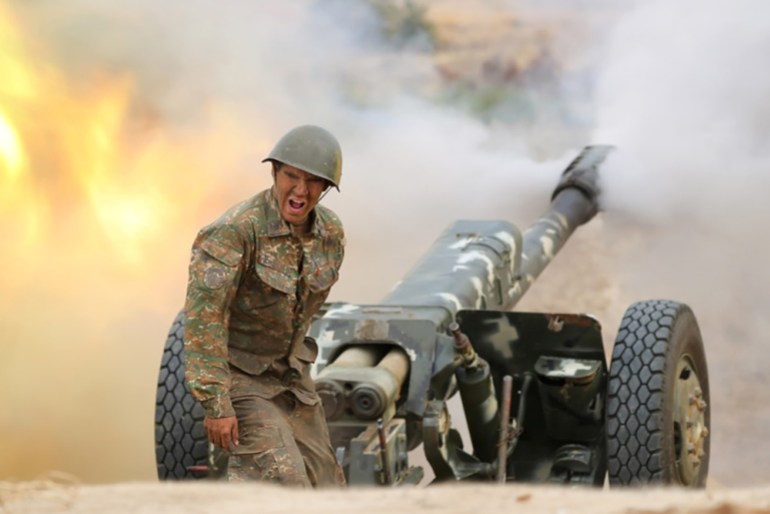 Nagorno-Karabakh is a disputed region inside Azerbaijan controlled by ethnic Armenians [Defence Ministry of Armenia/Reuters]In his call with the Azeri deputy prime minister on Wednesday, Vaezi also denied reports that Tehran was sending arms and military equipment to Armenia.

“These are completely baseless rumours spread to tarnish good relations between Iran and Azerbaijan,” he said.

On Tuesday, several videos circulated on social media showing trucks carrying covered loads through the Iranian border with Armenia, prompting claims military equipment was being exported for use in Nagorno-Karabakh.

Iranian Foreign Ministry spokesman Saeed Khatibzadeh immediately denied the reports, saying, “The Islamic Republic will by no means allow our soil to be used to move arms and ammunition”.

He said the trucks had been carrying “conventional, non-military goods”, as per usual.

Iranian state television on Wednesday broadcast from the Nordooz border terminal, where the trucks carrying the suspect loads were in a depot.

The vehicles were Russian Kamaz trucks, which a local official said had been purchased by Armenia before the armed conflict and were being transported through Iran. They were shown to be carrying vehicle parts.

Vaezi told Mustafayev that he remains confident Tehran-Baku ties will not be affected by such rumours.

Mustafayev also reportedly stressed that the two neighbours must not allow close bilateral ties formed over a long time to be influenced by outside plots.

“The two countries’ top officials have worked hard to develop and deepen Tehran-Baku relations and they stand at a good level today,” he said, according to the Iranian government’s website.