Singapore: Japan holds grave concerns about China’s military build-up and warns countries in the region must pay urgent attention to the situation in the Taiwan Strait.

For the first time in its annual defence white paper, the Japanese Defence Ministry has made a direct reference to Taiwan after Japan’s cabinet signed off on it on Tuesday morning. 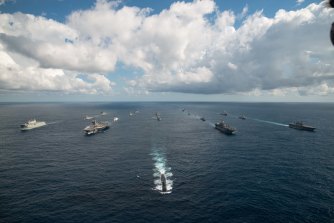 “Stabilising the situation surrounding Taiwan is important for Japan’s security and the stability of the international community,” the white paper said. “Therefore, it is necessary that we pay close attention to the situation with a sense of crisis more than ever before.”

The white paper revealed Japan is falling further behind China in it its military capability. China now has 1146 fourth and fifth-generation fighter jets to Japan’s 313. It also has 71 modern navy destroyers and frigates to Japan’s 47 and 52 modern submarines to Japan’s 21.

The ministry also raised concerns about a fleet of machine-gun armed Chinese coast guard vessels threatening the disputed Senkaku islands, which Japan and China claim as their own.

Tokyo has taken a more cautious approach to military rhetoric since its defeat in World War II, particularly in its own region, where it faces a direct territorial threat from Beijing.

“Chinese military threats, combined with insufficient transparency about China’s defence policies and military affairs, have become a matter of grave concern to the region, including Japan and the international community,” it said.

Japanese Deputy Prime Minister Taro Aso said last week his country would need to defend Taiwan with the United States if it was invaded by China. Asked about the comments in a briefing, the ministry said it “was conducting drills and exercises to be able to respond to a variety of situations”.

“But we have not been making public as to what kind of situations that we’re preparing for.”

The ministry said Japan has consistently maintained the issue should be resolved peacefully between the parties. China regards democratic Taiwan as a breakaway province that must be united with the mainland by the centenary of the founding of the People’s Republic of China in 2049.

Chinese President Xi Jinping reiterated calls for peaceful unification in a speech on July 1 but he also warned: “no one should misunderstand the will of the Chinese people to defend their territorial integrity”.

Taiwan’s Foreign Minister Joseph Wu said in June that Taipei did not expect conflict to break out soon but added it was preparing for any possibility. He said that while Taiwan appreciated any international support it would “fight for our own future”.

The ministry said it strongly hoped that China would play a more cooperative role in the region.

“The changes in the military power balance between the US and China may possibly affect the peace and stability of the Indo Pacific region,” the ministry said.

It highlighted serious concerns shared with countries in the region about the situation in the East and South China Seas including issuing “clear messages to strongly oppose industrial attempts to change the status quo by corrosion”.

Japan’s assessment of China’s military capability will be closely read in Washington and Canberra.

Foreign Minister Marise Payne on Monday reiterated Australia’s position that there was no legal basis for China to claim historic rights to resources within other countries’ waters in disputed zones.

Payne’s statement came on the fifth anniversary of a ruling by The Hague that established China has no claim to large tracts of the South China Sea and has violated The Philippines’ sovereignty by building artificial islands.

“The Australian government has consistently called on the parties to the arbitration to abide by the tribunal’s decision, which is final and binding on both China and the Philippines,” she said.

A spokesperson for the Chinese embassy in Canberra said it urged Australia to “view the historical merits and facts of the South China Sea issue in an objective manner and stop any political manipulation”.

“We deplore the recent statement by the Australian side on the South China Sea issue,” the embassy’s spokesperson said.

“China’s sovereignty, rights and interests in the South China Sea have been formed in the course of a long history. They are supported by abundant historical and legal basis and upheld by the Chinese government all along.”