Jeffrey Epstein indictment unsealed: Billionaire faces two counts of sex trafficking for assaults of a minor girl in NYC and two in Palm Beach – and ordered to forfeit his $40MILLION mansion

Jeffery Epstein will be arraigned on two counts of sex trafficking when he appears in court on Monday.

There were dozens of these underage girls according to the indictment, who would receive hundreds of dollars after being forced into sex acts or, as the indictment states, finding others to engage ins ex acts with Epstein.

‘Moreover, in order to maintain and increase his supply of victims, Epstein also paid certain of his victims to recruit additional girls to be similarly abused by Epstein, reads the court filing.

‘In this way, Epstein created a vast network of underage victims for him to sexually exploit.’

Epstein, 66, was aware the the girls were underage according to the indictment, which focuses on just three victims.

There is no mention of any other individuals who engaged in any sexual assault or molestation of minor females though, despite previous victims claiming this was a common occurrence with Epstein and his high-powered pals.

Epstein will appear in court for a bail hearing later today, at which time he will also try and fight a demand made by federal prosecutors  in the indictment that he forfeit his $40 million Manhattan mansion.

His lawyer has declined requests for comment ever since the moneyman’s arrest on Saturday. 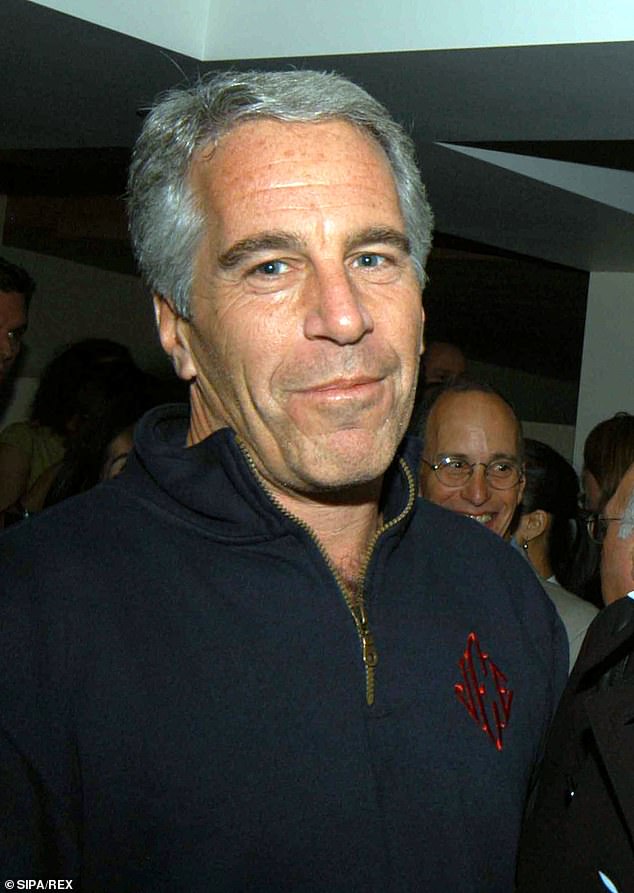 Federal charges: Jeffrey Epstein is charged with two counts of sex trafficking for his alleged sexual abuse of three minors 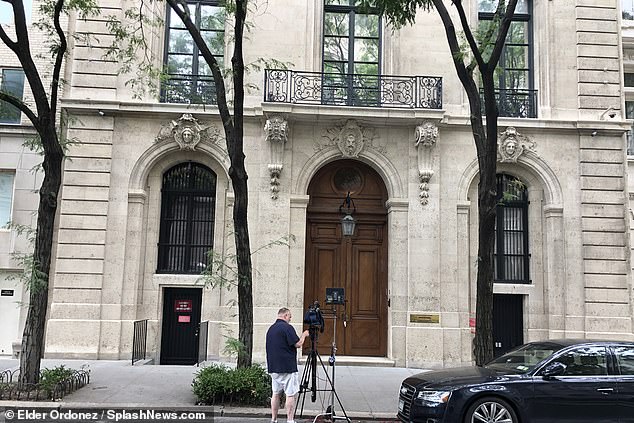 Give it up: Federal prosecutors are demanding that Epstein be ordered to forfeit his $40 million Manhattan mansion in the indictment (above)

The charges stem specifically from the alleged sexual assaults of the three minor victims and the actions of three Epstein employees between 2002 and 2005. The victims and employees are not named in the indictment.

Two of those minor victims were based near Epstein’s $6 million Palm Beach estate, while the other was near his Manhattan mansion.

The first count of sex trafficking occurred when Epstein’s employees in New York called the two minor victims in Palm Beach to schedule a time for the minors to meet with the convicted pedophile.

The second count relates to his alleged enticing of the minor victim from New York to commit a commercial sex act.

It is unclear whether those employees are cooperating with the investigation

The girls would be taken to Epstein’s houses according to the indictment and asked to give him a massage.

These massages ‘would be performed nude or partially nude,’ ‘would become increasingly sexual in nature,’ and ‘would typically include one or more sex acts.’

On June 30, 2008, Epstein entered a guilty plea to state charges of soliciting an underage girl for prostitution, and ultimately served just 13 months of his 18-month sentence.

He was never charged with a federal crime.

That time was served not in a prison, but rather the Palm Beach Stockade, which is a local detention center.

Epstein was also allowed to leave six days a week to go work out of his West Palm Beach office during his time behind bars. A few months later, the judge approved a trip to New York City to visit his lawyer.

After his release he did have to register as a sex offender in some states, but not New Mexico, where he owns a ranch, or the US Virgin Islands.

Epstein signed a non-prosecution agreement as well in the case, which was overseen by President Trump’s current Secretary of Labor, Alex Acosta.

That agreement is currently at the center of anther court case as the victims who first came forward are trying to have the case retried.

The non-prosecution deal does no extend to the Southern District of New York however, and while the young girls in the indictment were in Palm Beach at the time of the criminal action detailed by prosecutors, the actual crime was happening in New York.

A federal judge recently ruled that the agreement violated the rights of more than 30 victims, but the Department of Justice has stated that the case should not be retried in a court filing.

Acosta, who in his role as US attorney violated the rights of Epstein’s alleged victims when he neglected to notify them that they were no longer pursuing federal charges, has not commented on any of the current cases involving the pedophile. 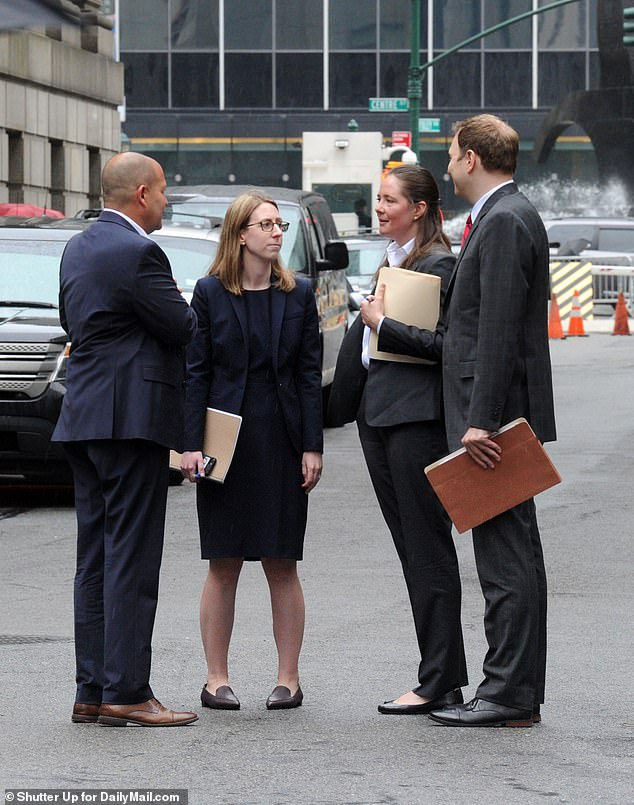 Legal eagles: Maurene Comey, the daughter of former FBI director James Comey, was seen outside court on Monday (second from right with Alex Rossmiller on right and fellow lawyers from the SDNY)

The charges against Epstein were filed following dozens of interviews with victims, who also spoke with the FBI and the NYPD.

The Public Corruption Unit is tasked with heading up the ‘prosecution of corruption crimes committed by elected and appointed officials, government employees, and individuals and companies doing business with the city, state, and federal government.’

Among the crimes it investigates are ‘bribery, embezzlement, and frauds committed against local, state, and federal government agencies,’ but no mention of sex trafficking.

It is also where former FBI director James Comey’s daughter Maurene is employed as a lawyer.

She has been assigned to the case and was seen outside federal court on Monday.

Epstein’s bail hearing later today will come less than 48 hours after he was taken into custody by federal agents at Teterboro Airport.

It all happened just before 5pm on Saturday, when Epstein reentered the country for the first time since June 16, when he took off from the same airport bound for Paris.

Prior to that trip, Epstein had been crisscrossing the US as he moved between his properties in New York City, Palm Beach, New Mexico and the US Virgin Islands.

Epstein’s arrest comes in the wake of a three-part expose in the Miami Herald detailing his settlements with victims and sweetheart plea deal.

Around the same time he was being arrested, agents with the FBI were seen breaking down the door to his Upper East Side mansion to execute a search warrant in the case.

DailyMail.com obtained exclusive photos which show the aftermath of that search, including Epstein’s damaged and splintered door.

The episode is likely to cause embarrassment to Prince Andrew, who was an associate of Epstein but has now severed ties.

Groups of unidentified men were seen coming and going at the property until 2am on Sunday.

A security guard from a nearby building told DailyMail.com that between 20 to 25 law enforcement officials showed up at Epstein’s home at around 6:30pm on Saturday.

Most of those were FBI agents, the security guard said. They were accompanied by several officers – both uniformed and plain-clothed – from the New York Police Department.

The guard told DailyMail.com that it took them approximately 10 to 15 minutes before they could pry the door open.

The front entrance appears to be outfitted with fingerprint and keypad technology for security purposes.

The guard says that in the hours since the raid, more law enforcement personnel arrived at the home, where they are expected to work well into Sunday morning.

The guard, who identified himself as Tom, said he would see Epstein there once or twice a month.

He said that two weeks ago, he noticed someone on the street taking photographs of Epstein’s residence.