‘Flush chunks down toilet not garbage disposal and blast heat to melt off fingerprints’: The chillingly detailed notebook of son accused of dismembering his parents and boiling his mom’s head in a pot

Joel Guy Jr, the Louisiana man accused of stabbing and dismembering his parents over the 2016 Thanksgiving weekend in Tennessee, made meticulous notes about how he would slaughter and dispose of his victims before carrying out the plot, a jury heard Tuesday.

The 31-year-old appeared in Knoxville court on Tuesday for the second day of testimony in his first-degree murder trial in relation to the November 2016 slayings of his father Joel Michael Guy Sr, 61, and his 55-year-old mother, Lisa Guy.

Prosecutors say that Guy Jr first knifed his father to death in the upstairs exercise room of his West Knox County house on November 26, 2016, then ambushed and stabbed his mother to death when she returned home from a shopping trip.

The son then allegedly dismembered his parents’ bodies and tried to dissolve some of the remains and boiled his mother’s head in a pot.

But before allegedly carrying out the heinous crime, Guy Jr meticulously plotted his every murderous move in a notebook, detailing at great length how he would kill his mother and father, then how he would dispose of their remains, step-by-step.

‘Douse killing rooms (kitchen?) with bleach,’ one of the bullet points discovered in the notebook reads. ‘Flush chunks down toilet, not garbage disposal … don’t have to get rid of body if no forensic evidence.’ 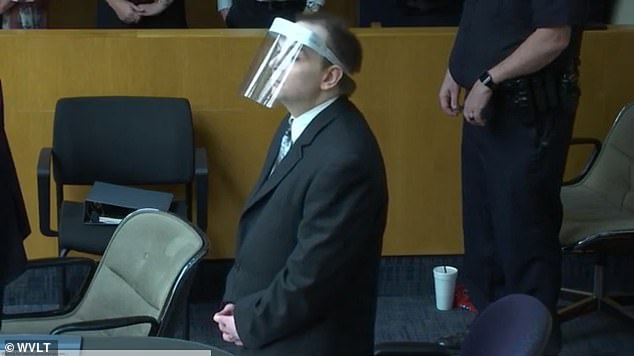 Joel Guy Jr, 31, is on trial in Tennessee for the savage murders of his parents, who were dismembered inside their home in 2016 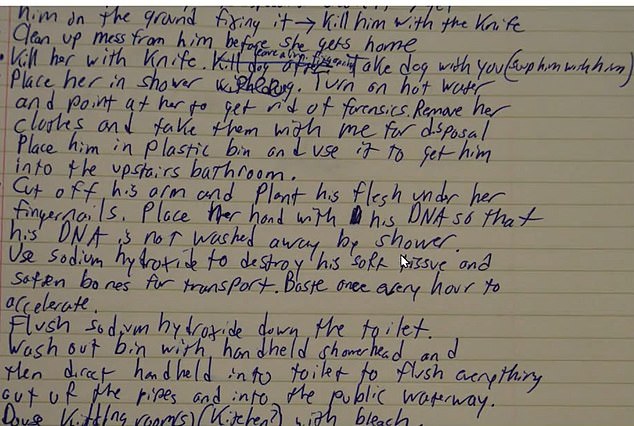 Before allegedly carrying out the heinous crime, Guy Jr meticulously plotted his every murderous move in a notebook, first detailing at great length how he would kill his mother and father, then how he would dispose of their remains, step-by-step 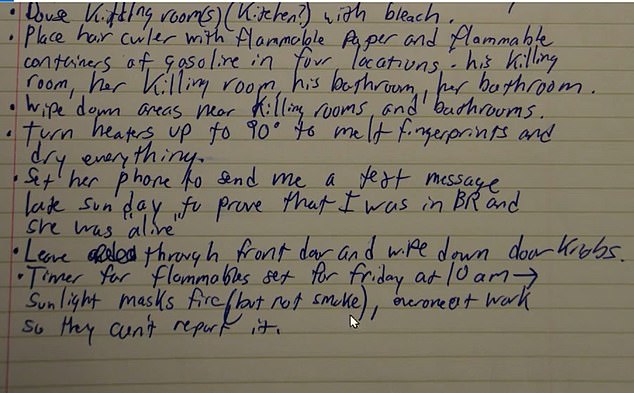 The purported murder instructions then advise wiping down ‘areas near killing rooms and bathrooms’, before turning up the heating to 90 degrees in the home because it ‘speeds up decomposition’ and ‘melt[s] fingerprints’ 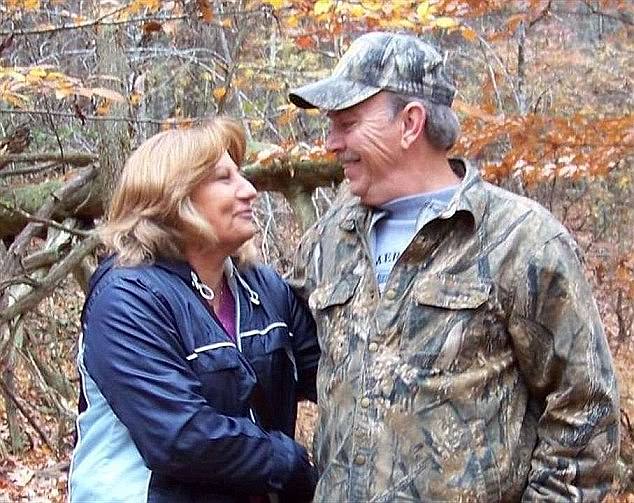 Guy Sr was stabbed 42 times and had his limbs cut off, while his wife suffered 31 knife wounds and had her head severed and boiled in a pot

The notebook was reportedly found in a backpack in the guest bedroom where Guy Jr. had been staying for the holiday weekend, Sandlin detailed.

The notes contained a plan for the killings and explicitly describe the steps Guy Jr. was allegedly hoping to take to eradicate any evidence of his apparent role in their deaths. 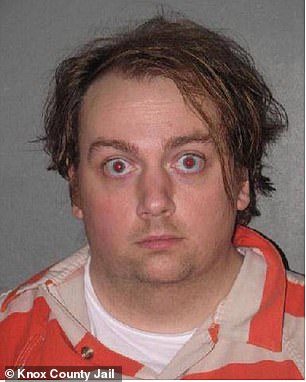 Aligning with the police’s theory that Guy Sr died first, the notes read ‘kill him with the knife… clean up mess from him before she get home.’

The corresponding bullet point reads ‘kill her with a knife’, before instructions to place ‘her’ – to which the police interpret to be Lisa Guy – in the shower and ‘turn on hot water and point at her to get rid of forensics’.

The notes then detail how Guy Jr. allegedly sought to place his father’s body in a plastic bin and use it to haul him into the shower alongside his mother’s body to wash away evidence.

‘Cut off his arm and plant flesh under her fingernails,’ the scrawl, written in blue ink, reads on the page. ‘Use sodium hydroxide to destroy his soft tissue and soften bones for transport. Baste once every hour to accelerate’.

The purported murder instructions then advise wiping down ‘areas near killing rooms and bathrooms’, before turning up the heating to 90 degrees in the home because it ‘speeds up decomposition’ and ‘melt[s] fingerprints’.

The possibility of setting fire to the Guy family home to vanquish all evidence is explored in the notes, as is flooding the home to ‘cover up forensic evidence’.

A reminder to send a text from ‘her phone to send to me… late Sunday’ is also specified. The author details that such a ruse would ‘prove that I was in [Baton Rouge] and she was alive.’

Another page shows details of the ‘assets’ belonging to Lisa Guy including a $500,000 life insurance policy that lists Guy Jr as a beneficiary.

According to the prosecution, Guy Jr’s motive for the savage double homicide was financial because his parents had been planning to stop giving him money.

Guy was reportedly studying to be a plastic surgeon in Baton Rouge, Louisiana, and had been in college for nine years while his parents supported him.

The couple, who both worked as engineers, were ready to retire and stop providing him with assistance. 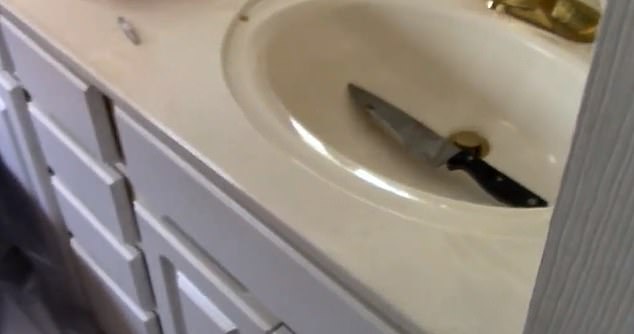 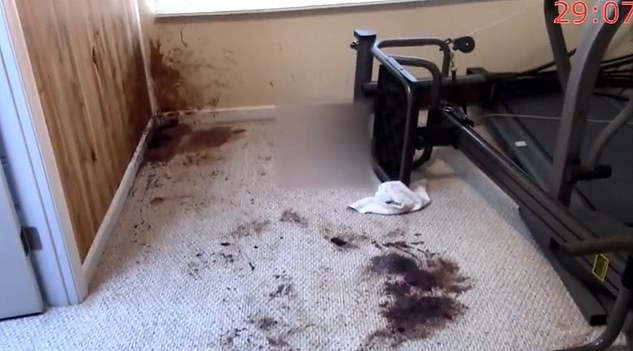 Guy Sr was stabbed to death inside his exercise room, with his blood staining the wall. Police found his severed hands on the carpet (blurred) 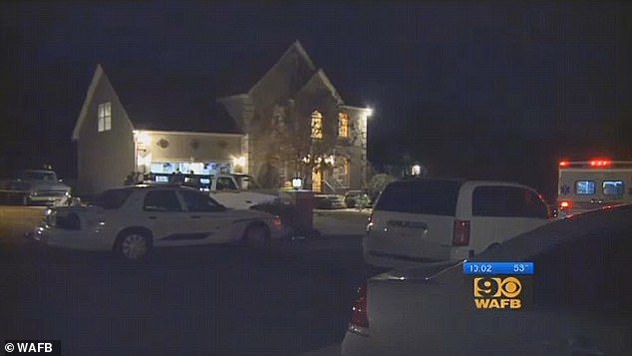 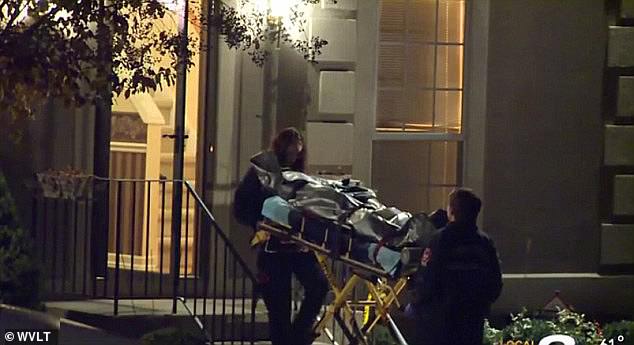 Guy Sr and Lisa’s torso were found submerged in corrosive chemicals. This screenshot from WVLT shows a body being removed the the crime scene

Guy Jr arrived at his parents’ home on Wednesday, November 23, spent Thanksgiving with his parents and three sisters, and returned to Baton Rouge on Sunday.

When Lisa failed to show up for work on Monday, her supervisor, Jennifer Whitehead, made multiple attempts to reach her by phone, but she did not pick up.

Concerned for her safety, Whitehead told jurors she called the authorities and asked them to perform a welfare check, leading to the gruesome discoveries that were described by investigators as ‘horrific.’

One of the attending officers, KCSO Detective Jeremy McCord took the stand Tuesday and revealed that he had an ‘ominous feeling’ when he arrived first on-scene at the home. He entered the property through a garage door.

‘As soon as that garage door opened, we immediately felt heat,’ said McCord. ‘Walking through the downstairs of the house, nothing made sense to me.’

The detective detailed how groceries had not been put away properly and he spotted two people’s wallets next to one another on the table.

McCord said after he saw what he believed to be blood on the wall, he instructed all officers present to put gloves on.

‘You can see straight down the hall and I saw hands… not connected to a body. At that point, the other officers held the hallway and we started doing standard building clearing.

‘I will never get those smells out of my head or my dreams,’ he said.

Jurors saw the aftermath of the grisly crime when Knox County Sheriff’s officer Sandy Campbell took the witness stand yesterday and narrated a 30-minute video showing her walking through the crime scene.

The graphic video shows blood stains on the carpet throughout the house, piles of bloodied, shredded clothing belonging to the victims, and a severed human hand resting on the floor in the couple’s blood-spattered home gym.

The recording also shows the kitchen, with a large metal stockpot covered with a lid containing Lisa Guy’s head boiling on the stove. 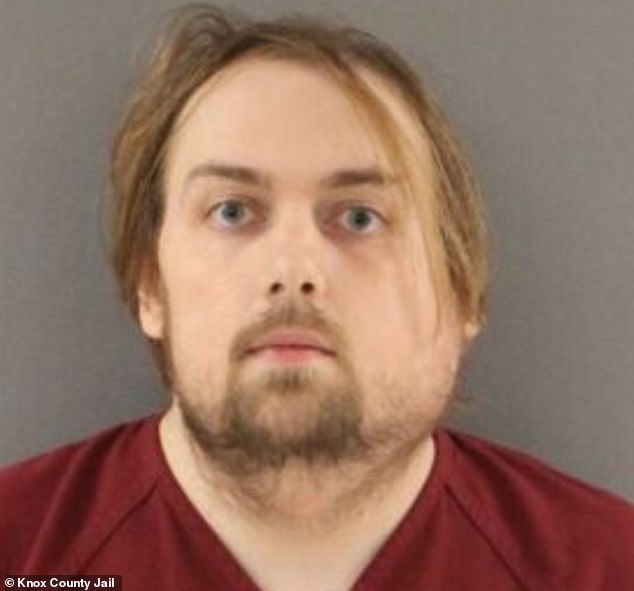 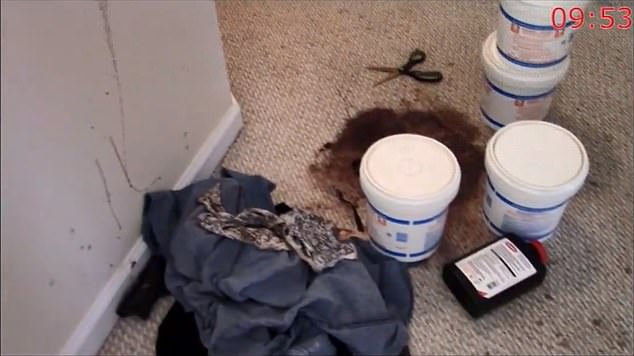 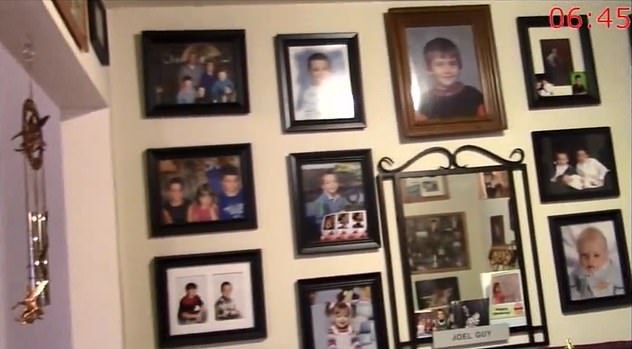 Later in the video, Campbell encounters two large blue plastic bins with partially liquified human remains floating inside. That portion of the footage has been blurred due to its graphic nature.

Deputies who responded to the home on November 28 to perform a welfare check found remains, including human hands, strewn all throughout the gore-splattered home.

The victims’ torsos and some of their limbs were placed in 45-gallon plastic containers, doused with a corrosive chemical and left to liquify, in what prosecutors described as a ‘diabolical stew of human remains,’ reported WVLT.

Knox County prosecutor Leslie Nassios on Monday detailed the full roster of the horrific injuries sustained by the victims.

Guy Sr was stabbed and slashed 42 times, with some of the blows severing his ribs and puncturing his liver, lungs and kidneys.

Autopsy showed that the man’s hands were cut off at the wrists, his arms were severed at the shoulder blade, his legs were sawed off at the hip and his right foot was removed at the ankle. Nassios said the evidence indicated the father fought for his life.

Lisa was stabbed 31 times and had nine of her ribs severed. Her legs were cut off below the knee and her arms were removed at the shoulder.

The Guys had just sold their house and were in the process of moving into another home belonging to Guy Sr’s deceased mother, which they had recently purchased, The Advocate reported.

Rene Charles, Guy Sr’s sister, said her brother and his wife had planned to retire in Surgoinsville, Tennessee, according to the Kingsport Times-News.

Guy Jr was apprehended at his Baton Rouge, Louisiana, apartment on November 29, 2016 as he tried to get flee in his 2006 Hyundai Sonata.

The murder trial is expected to last a week. The state is not seeking the death penalty against Guy Jr.