Sisters Karen and Quynh Nguyen wept with joy as they reunited on Sunday morning after an enforced two-year physical separation.

Karen visited Vietnam late in 2019 and had been waylaid there since Australia closed its international borders in March last year. 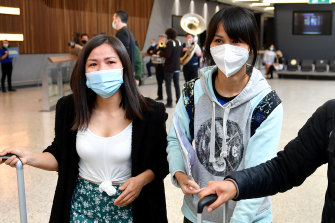 Sisters Quynh (left) and Karen Nguyen greet each other just after Karen stepped off the first unrestricted flight for vaccinated travellers to Melbourne from Singapore. Credit:Joel Carrett

“I went for a visit and then I got stuck there for two years,” she said through tears and a face mask on Sunday. “We cry, but we’re really happy.”

Karen, a childcare worker, was on the very first flight between Singapore and Melbourne that is part of a two-way unrestricted travel bubble between the two countries.

Singapore is the first country to enter into the arrangement with Australia, which gives fully vaccinated travellers the freedom to enter either country without quarantining.

A plane also arrived in Sydney that is part of the same “green lane”.

The sisters’ plans for the day included “a meal, a COVID test and that’s it”, Quynh said.

The university sector also hailed the new direct travel bubble as an essential step in the rejuvenation of the multibillion-dollar international student market.

About 130,000 enrolled students remain outside Australia, Universities Australia said. The handful who touched down on Sunday were the first to do so since small numbers returned in November last year, chief executive Catriona Jackson said.

The Age spoke with more than a dozen Singaporean travellers who arrived on Sunday morning but just one, Subim Shin, said he was here to study.

Mr Shin, 29, is just two months into a doctorate in chemical engineering at the University of Melbourne and has come here despite having no friends or contacts other than his university supervisor. He expects to stay here for the next three to four years, but is yet to find a place to live.

“I’ve booked a hotel for one week,” he said. “I need to find a proper room for a long time; somewhere near the university, maybe Melbourne CBD or in Carlton.”

The Andrews government confirmed on Friday that fully vaccinated international students will not have to quarantine under its arrivals plan. Students must return a negative test within 72 hours of departure.

Victorian Tourism Industry Council chief executive Felicia Mariani was at Melbourne Airport to greet travellers on the first bubble flight and said Singapore was a highly valuable tourist market, with visitors from the city-state having spent $319 million in Victoria in 2019.

Ms Mariani said she hoped to see visitors from the US, UK and Japan welcomed back soon, a sentiment echoed by Melbourne Airport chief executive Lyell Strambi.

“I think getting back to normal is going to take a long time, but one would hope that we will open up to those significant markets early on in the new year,” he said.

“The first quarter of 2022 would be our hope, but it really is in the hands of the federal government and the states to be comfortable allowing citizens from other nations, even though they are vaccinated, to come into our state.”

Though most travellers said they were visiting family, at least two were on a holiday: honeymooners Jansen and Krystle Lee snapped up seats on the plane the minute they went on sale.

Australia’s relatively low COVID-19 rate was important in their thinking.

’I think Australia is a safe space right now,” Mr Lee said. “We both used to live in Australia for a bit so it’s probably the best option at the moment.”

The couple said they planned to visit wineries, the Grampians and the city.

Engaged couple Seng Lin and Srey Neath Ny said they would wed within two months, after being apart for almost two years.

“It’s been quite hard. We’ve just been waiting, waiting for the green light to come over,” Mr Lin said as his fiancee, who was on the flight, wiped away yet more happy tears.