Home » World News » ‘Just deal with it’: Republican tweets at Trump to give up

Detroit: A top Michigan Republican is urging President Donald Trump to acknowledge his electoral loss and move on with the transition of administrations for the "good of the nation."

In a tweet directed at Trump, retiring US Representative Paul Mitchell of Dryden said he'd "keep trying this" – a reference to previous remarks he's made about Trump needing to accept election results. 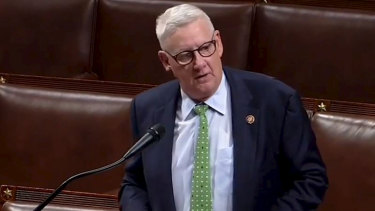 US Representative Paul Mitchell, the Republican who has told Trump to “get over” his election loss.

"I will keep trying this … @realDonaldTrump legal challenges alleging fraud have failed due to lack of evidence. Recounts may change numbers slightly – not enough to change the outcome," Mitchell wrote.

"The good of this nation requires an effective transition. Let's just deal with it."

Mitchell, who is retiring from Congress at the end of his term, has previously said the nation demands its political leaders accept wins and losses "with grace and maturity". Of Trump, Mitchell also said "even if you say repeatedly, it doesn't mean you won."

Trump lost the November 3 presidential election and Michigan to Democrat Joe Biden, but he refuses to concede and has continued to publicly claim he won. Lawsuits he's filed alleging irregularities in Michigan and other battleground states have failed to show evidence of widespread voter fraud. 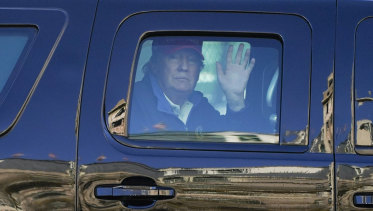 US President Donald Trump waves to supporters from his motorcade as people gather for a march in Washington.Credit:AP

Instead, Trump has in recent days tweeted a series of false statements on the election results, blended with a medley of other thoughts on Coronavirus and Europe, Ohio and Georgia elections, and his preferred TV watching.

Many posts have attracted warnings from Twitter such as: "This claim about election fraud is disputed."

He has ruminated on a "hotly contested" Ohio gubernatorial race in 2022, after the state’s governor, Mike DeWine, congratulated Biden on his win:

He also directed followers to a far-right rival to Fox News, now that he's angry with the News Corporation channel for cutting away from his press conferences and also for calling the result for Biden.

He also warned of the coronavirus's effect on Europe, while making sure to claim credit for any vaccine success:

He also continued to main falsely that he won the election.

Libertarian US Representative Justin Amash, on Monday called on his Republican colleagues in Congress to "intercede" on Trump's claims, saying what Trump is doing is "not healthy."

Amash, who has long criticised the president, left the GOP last year. 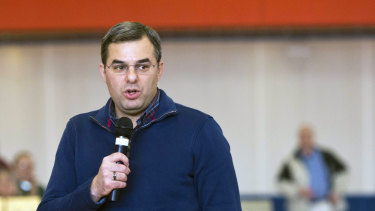 "What the president is doing is not healthy. He has the right to pursue legal challenges – even futile ones, but he is hurting himself and the country with his absurd proclamations," the Libertarian congressman wrote. "Republicans in Congress need to intercede."

Republican legislative leaders in Michigan's capital of Lansing on Friday confirmed they have no plans to circumvent the popular vote for president in the state by appointing electors friendly to Trump to cast votes in his favour.