Mr Rudd confirmed the apology, which Ms Credlin delivered on her show on Monday night, was part of a defamation settlement. 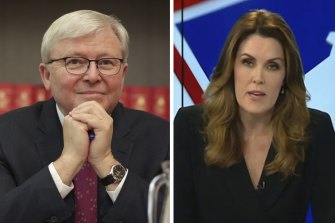 “I’m pleased to say that Murdoch’s Peta Credlin – the Liberal Party mouthpiece masquerading as a journalist – has settled my complaint against her for defamation. The terms are confidential, but here’s the on-air apology for her false claims on Sky News,” Mr Rudd wrote on Twitter.

“I’m fortunate to have the resources to take on the Murdoch media. But so many ordinary Australians are targeted by these bullies every day, ruining their lives, and they have no means of fighting back. They abuse their power with impunity and must face a [Royal Commission].”

Mr Rudd said his lawyers contacted Ms Credlin “demanding an immediate on-air apology for her lies” the day after her initial claims were aired last year.

On her show on November 11, Ms Credlin said: “I know how these things work, this petition is a data harvesting exercise.

“Thanks to this petition … Rudd now has more than half a million email signatures, and you can be sure they’ll be used to bombard people with hard left propaganda and urge them to boycott the Murdoch media.”

On Monday, Ms Credlin said her initial claims were “false”.

“On November 11 last year, while commenting on former prime minister Kevin Rudd’s petition to the house of representatives … I said the petition was a data harvesting exercise and that Mr Rudd now had more than half a million email addresses to use for his own political purposes,” Ms Credlin said.

“That was false. Mr Rudd did not have access to the email addresses in the petition because they were the property of parliament, nor did he seek them.

“The misuse of the email addresses as claimed would have been a serious invasion of peoples’ privacy. I apologise to Mr Rudd for any damage caused to him by my false statement.”

Following Monday’s apology, Mr Rudd once again called for people to join his campaign for a Royal Commission. His petition is currently before parliament.