Home » World News » Laura Kuenssberg condemns ‘horrifying’ scenes in US – ‘It was a democratic election!’ 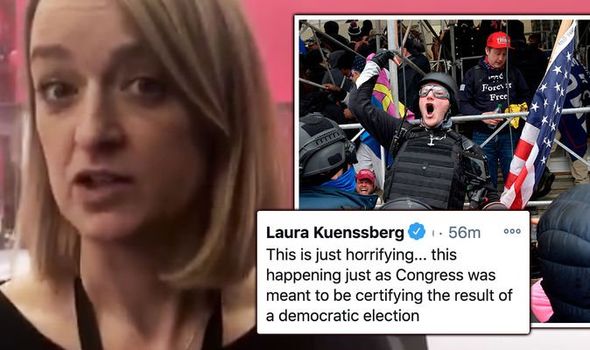 Donald Trump supporters have stormed the House of Congress in Washington following a speech by the outgoing President earlier today. Footage showed Trump supporters running amok, with other images showing arms police in the building.

Politicians were evacuated including Vice President, Mike Pence, who was taken to a secure location according to US news sources.

Mr Pence said: “The violence and destruction taking place at the US Capitol must stop and it must stop now.

“Anyone involved must respect Law Enforcement officers and immediately leave the building.”

NBC has also reported a spokesperson for the emergency services has stated several people have been treated for injuries while there has been an unconfirmed report of someone being shot.

Other politicians were also removed from the US Congress, while Mr Trump has called on the protesters to remain peaceful and support the police instead of clashing with them.

BBC’s political editor, Laura Kuenssberg has lashed out at the protests, which erupted as a result of the election which saw Joe Biden win the vote.

Ms Kuenssberg tweeted: “This is just horrifying… this happening just as Congress was meant to be certifying the result of a democratic election.”

Protesters managed to breach the halls of the Congress had managed to enter some office buildings as they attempted to reach lawmakers.

The state’s Governor, Ralph Northam revealed the Virginia National Guard has been deployed.

They will be accompanied by 200 state troopers in order to attempt to stop the protesters.

Reports have stated Vice President-elect, Kamala Harris, is safe as police continue to clash with protestors.

Representative, Elaine Luria stated she was forced to leave her office after a pipe bomb was reported outside her office.

She said: “I just had to evacuate my office because of a pipe bomb reported outside.

“Supporters of the President are trying to force their way into the Capitol and I can hear what sounds like multiple gunshots.”

The protesters descended on Washington DC as US politicians moved to certify the US Election.

Mr Trump had earlier addressed thousands outside the White House where he repeated unproven claims that the election was fraudulent.