‘Sexy as f*ck’: Local New York reporter keeps her composure as an obnoxious man harasses her with sexist and racist catcalls while on camera

A local reporter in Rochester, New York is being praised online for keeping her composure as she was harassed with sexist and racist comments by an obnoxious man while she was on camera.

Spectrum News 1’s Brianna Hamblin was setting up a live shot with her cameraman Scott Barstow when a man walked down the street began talking to Hamblin.

A man walking down the sidewalk announced that he did not want to be on camera. After Barstow told him they weren’t live yet, the man thanked her and said ‘you look nice.’

A second man walking in the residential neighborhood then took the supposed compliments too far. 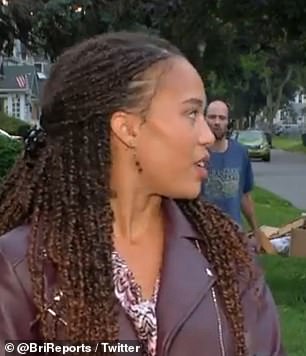 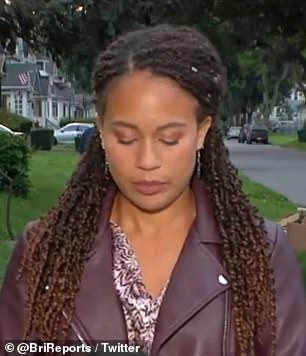 While setting up her live shot, the Spectrum News 1 reporter had a ‘disgusting’ encounter with a stranger who was walking in the residential neighborhood

‘You’re beautiful as hell,’ he said to Hamblin, who said ‘thank you’ with a tight smile.

‘I better not be on the motherf*cking camera,’ he said, asking why they were in the area to which she replied that he should watch Spectrum News and find out.

‘See, that’s why I can’t be left alone with a Black woman, or a mulatto chick,’ the man said. ‘Because I can’t stand these f*cking white girls.’

‘Alright,’ said Hamblin, looking at the camera. ‘We are done here. Have a great rest of your day.’

‘You are sexy as f*ck,’ the man said, continuing to talk to himself as he walked away. Barstow zoomed in on Hamblin’s face as she takes in the situation ‘Oh, my God.’

Hamblin posted the video of the ‘uncomfortable encounter’ on her Twitter account on Friday in a thread explaining how often these situations occur to her as a woman reporter out in the field and thanking her co-worker Barstow for being there.

‘Being hit on and harassed as a woman, especially as a woman reporter out in the field, happens so often you learn how to roll with it or ignore it. This time it happened to be recorded only seconds before my hit. There are A LOT of things wrong with this.’

‘1.If you don’t want to be on camera, simply avoid it or ask nicely to not be on camera. Don’t walk towards it or make a scene. Who said this was about you?’

‘2.’Oh, men these days just can’t give compliments.’ No. The first man’s ‘you look nice’ as he continued to walk away is fine. It’s the 2nd man who took this to another disgusting level it didn’t need to be.’

‘3.The audacity of the things men say to me never ceases to amaze me. What makes you think women want to be talked to that way? In no way is this endearing. It’s uncomfortable. It’s gross.’

‘4.Being a Black woman in this industry has its own headaches, but talking down on one group of women to ‘praise’ another group is NEVER okay. It just shows you have a disgusting fetish based on stereotypes, which is just as racist.’ 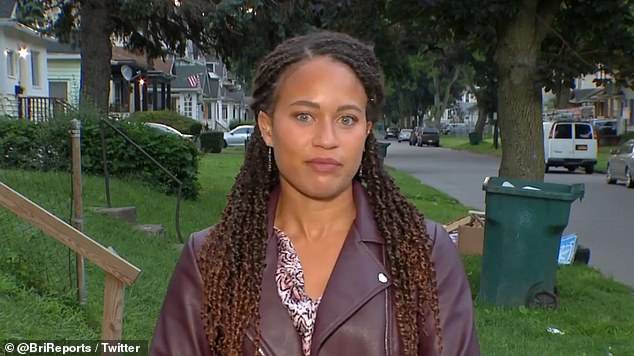 After thanking Barstow she ended the thread writing, ‘Thank you to all who have said such kind things to me. I see it and I appreciate it so much. To all the women who related to this, I’m sorry and want to give you a big virtual hug. Thank you for sharing your own experiences too so men realize how common and unwanted this is.’

Hamblin’s thread went viral amassing 148.6K likes and 29.2K retweets in a day. She is being praised online for keeping her composure as other women have commented on her thread sharing their own stories of harassment.

Spectrum News commented on Hamblin’s ‘disgusting’ encounter telling Mediaite, ‘We are glad that Brianna wasn’t alone in the face of such adversity and we’ve never been more proud of her. She handled the situation impeccably, remaining calm and professional throughout. We want our employees to feel safe and are constantly working towards achieving that goal.’

Unfortunately as Hamblin explained in her Twitter thread, sexual harassment is a common occurrence for most women. According to new data from U.N. Women, 97% of women aged 18 to 24 have experienced sexual harassment in public spaces, and more than 70% of women of all ages have been harassed.