A WOMAN has died and the race is on to find any survivors after a 65-foot crane collapsed on top of two houses and a block of flats in East London this afternoon.

At least four others are injured and an 80-year-old woman is believed to be trapped in the wreckage of her home after the shocking incident, which happened in Gale Street, Bow, at around 2.30pm. 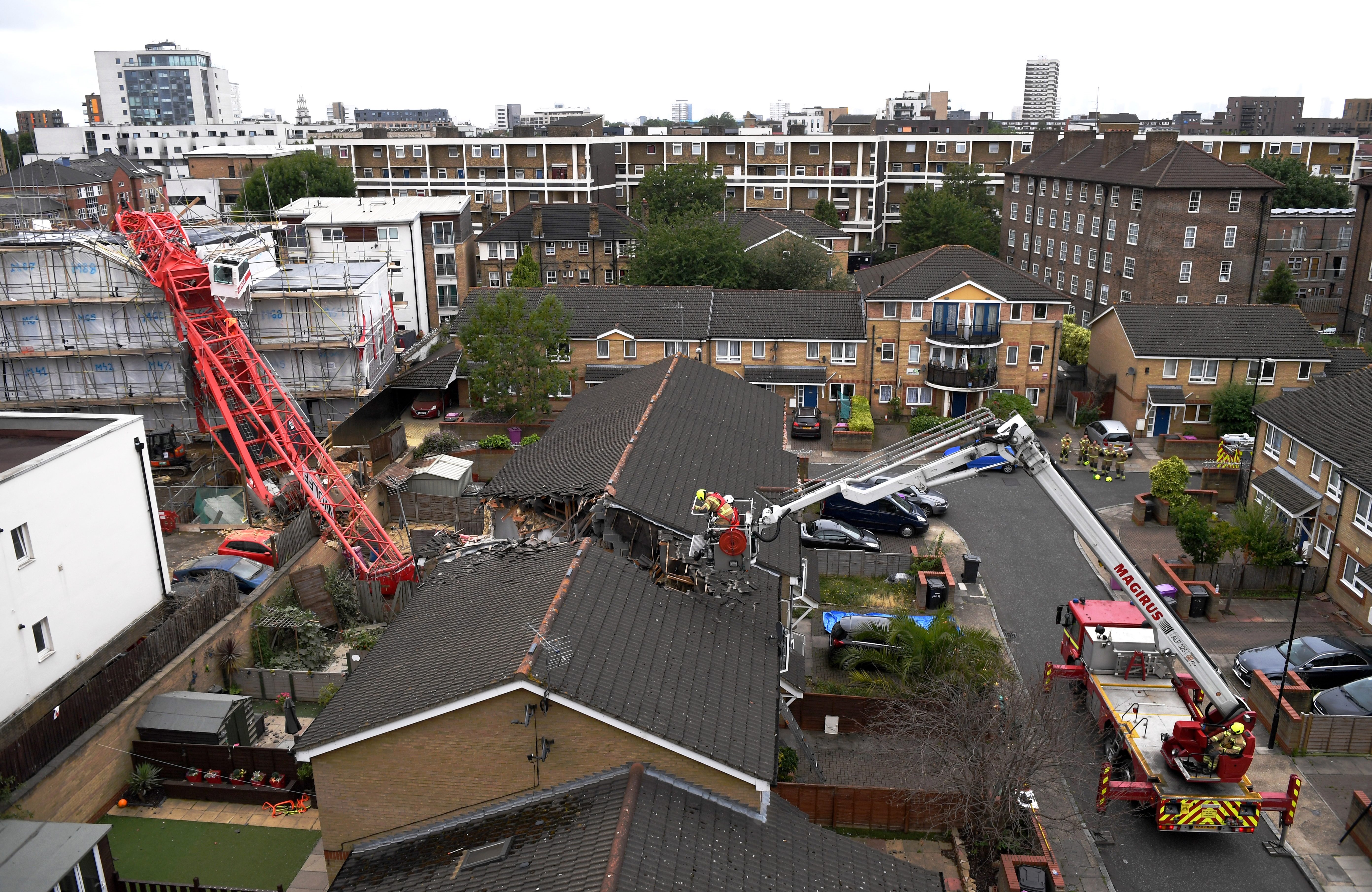 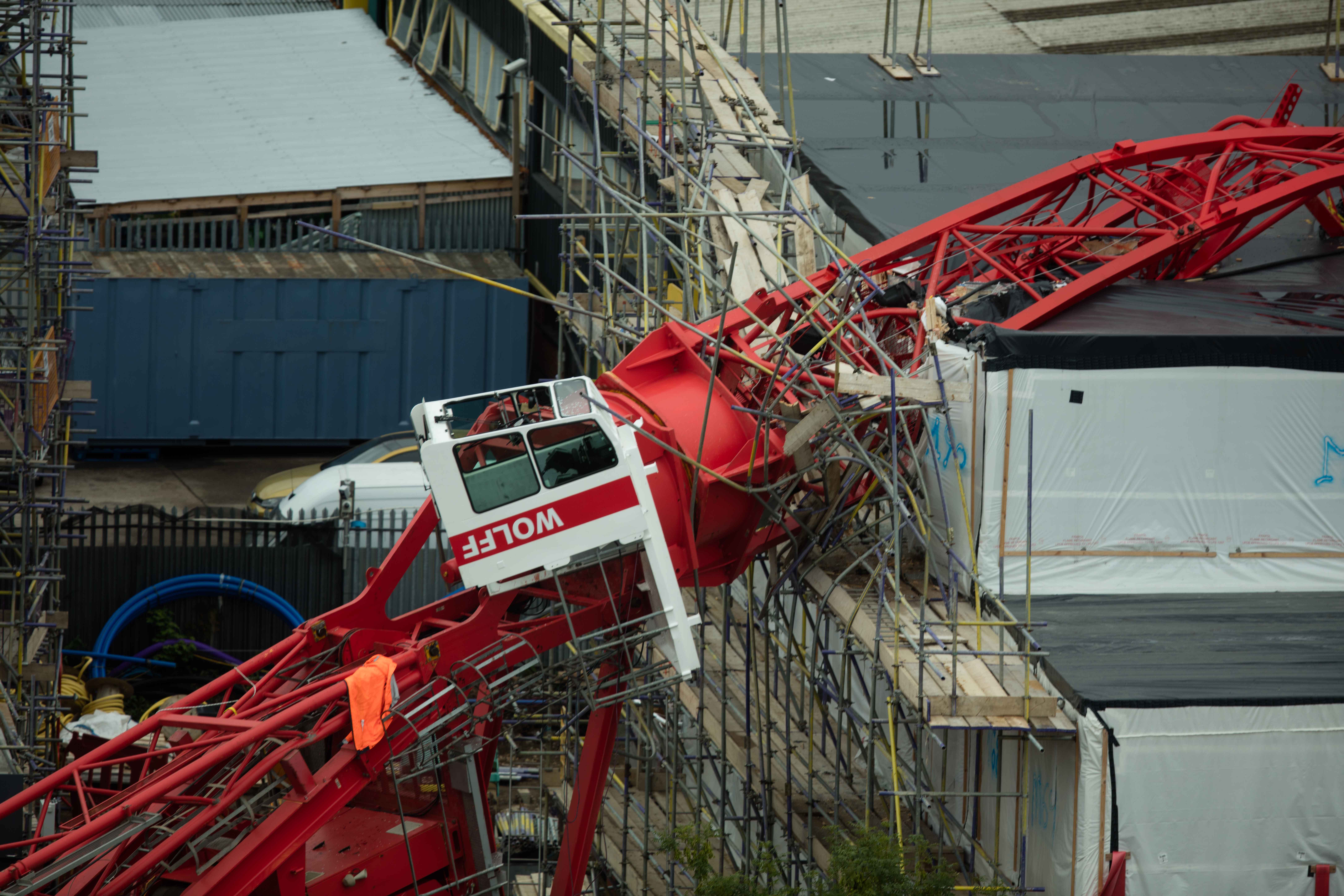 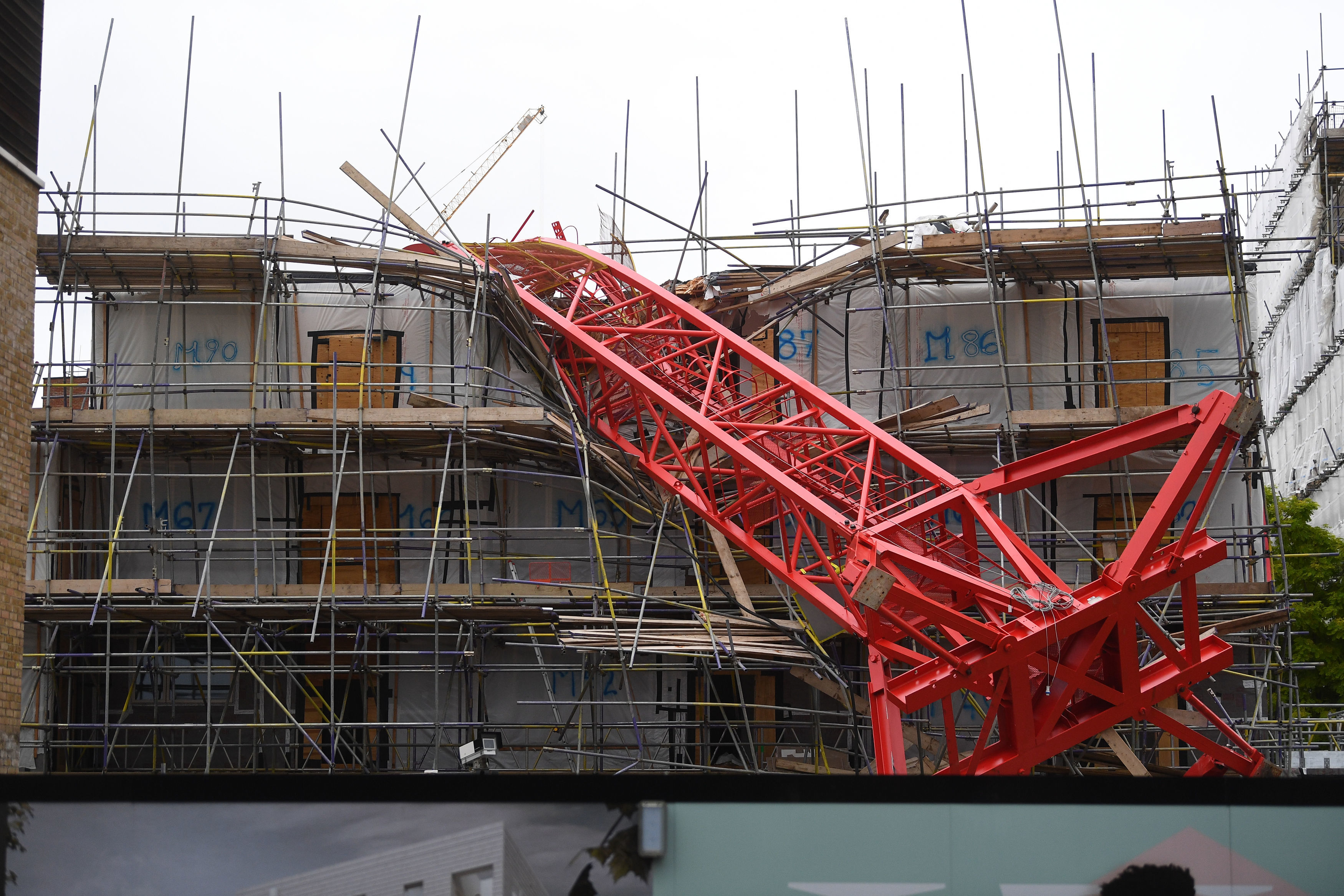 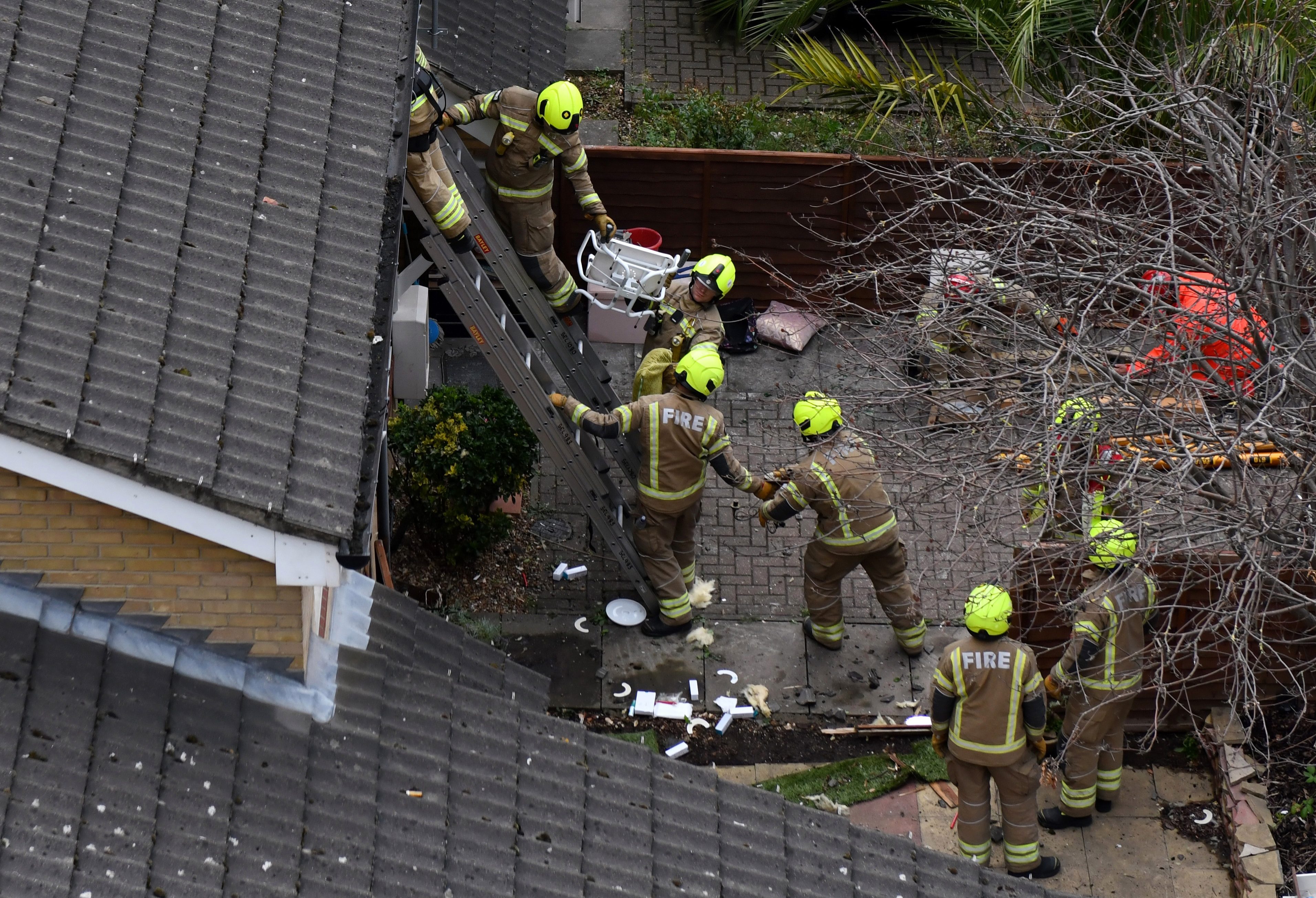 Pictures from the scene show the destruction caused by the crane, as well as firefighters and search-and-rescue teams combing through the wrecked homes.

Officials said two people were rushed to hospital with head injuries and another two were treated at the scene.

A huge search was launched for a person missing in the rubble of the destroyed properties.

And this evening, emergency response teams have confirmed that a female casualty has died in the tragedy.

London Fire Brigade said a woman had been found on the first floor of one of the houses.

It's believe an 80-year-old woman is also trapped.

Hero neighbours rushed to save those stuck in the destroyed properties after the horrific incident.

One witness said she saw a "shivering and shaking" woman being led to safety after she was rescued from the second floor by firefighters who had scaled up ladders to the windows.

Sahana Begum, who lives a few streets away, rushed outside when she heard the crash.

"I saw someone yelling that a crane had fallen – then I could hear someone saying, 'Help, help, help'," she said.

"As she was coming down the ladder you could see that she was shivering.

"She was shivering so much that she could have fallen over because she looked like she was going to miss her step."

"As long as they're alright, it doesn't matter," he said.

And Rahana Rahman, 26, said she she's lucky to be alive after the crane smashed through the properties.

The property lawyer said: "Out of nowhere I heard big noise, big rubble, I thought it was an earthquake.

"The whole house shook so much and I can hear my mum just screaming because I was the only one upstairs.

"She thought that it had hit me.

"If I had been in the bathroom, the attic would have come down on me.

"It would have knocked me out.

""I can't believe the timing. I just had closed the door to my room and heard that.

"I literally can't believe it. I had literally had a narrow escape. We're so lucky."

Eye-witnesses at the scene told of how the crane collapsed on top of an apartment building currently under construction and then hit a row of terraced houses.

Neighbours reported hearing a loud crash followed by sirens as emergency services responded to the incident.

One witness, who did not want to be named, told The Sun Online: "It was a huge crash and everyone was running to their windows to see what had happened.

"Just a couple of minutes later the sirens started and there's been more and more police, fire, ambulances arriving since."

The four storey block of flats is currently under construction near a row of terraced homes.

The crane appears to have fallen on top of the flats before part of the structure hit the two houses around 30 feet away. 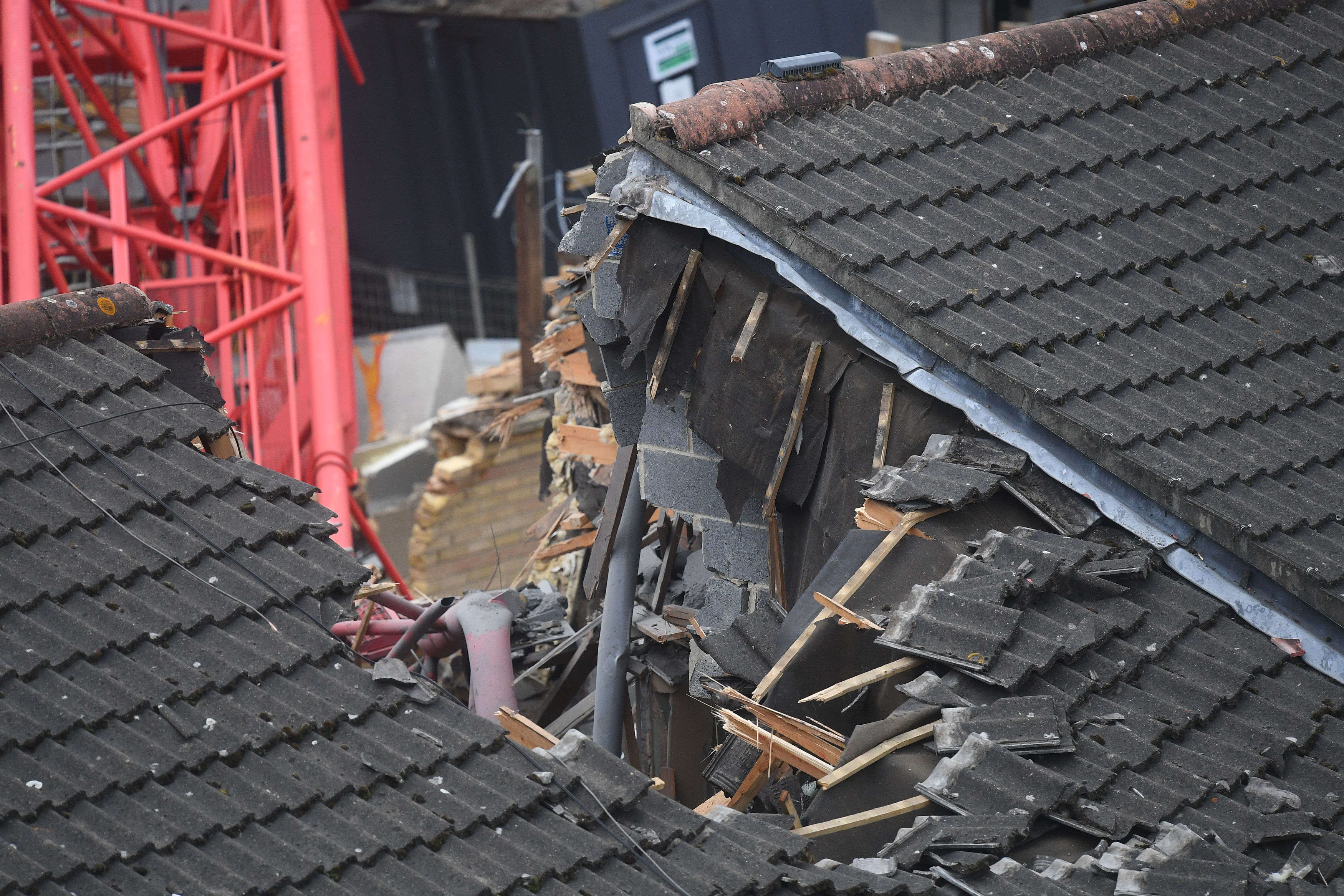 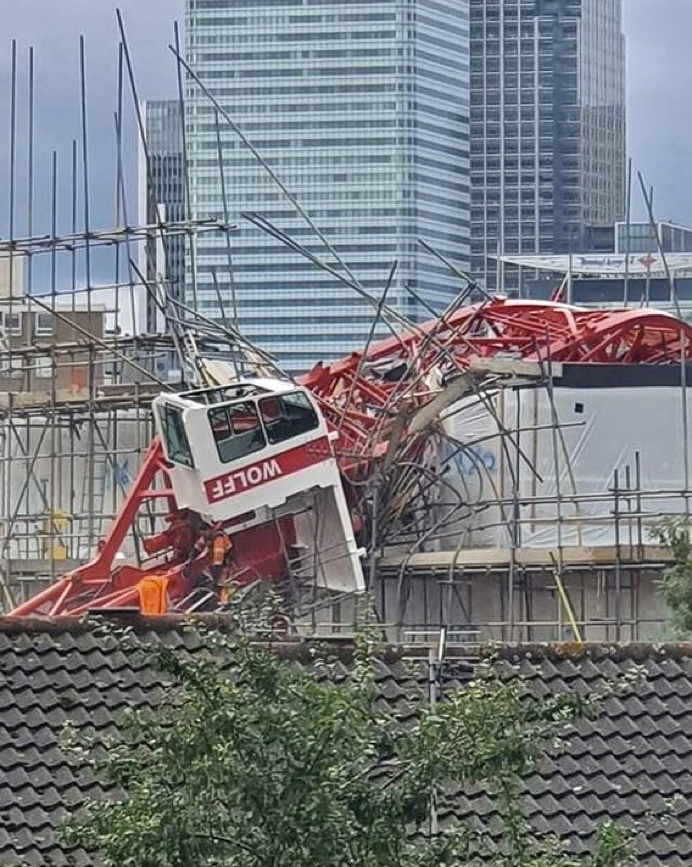 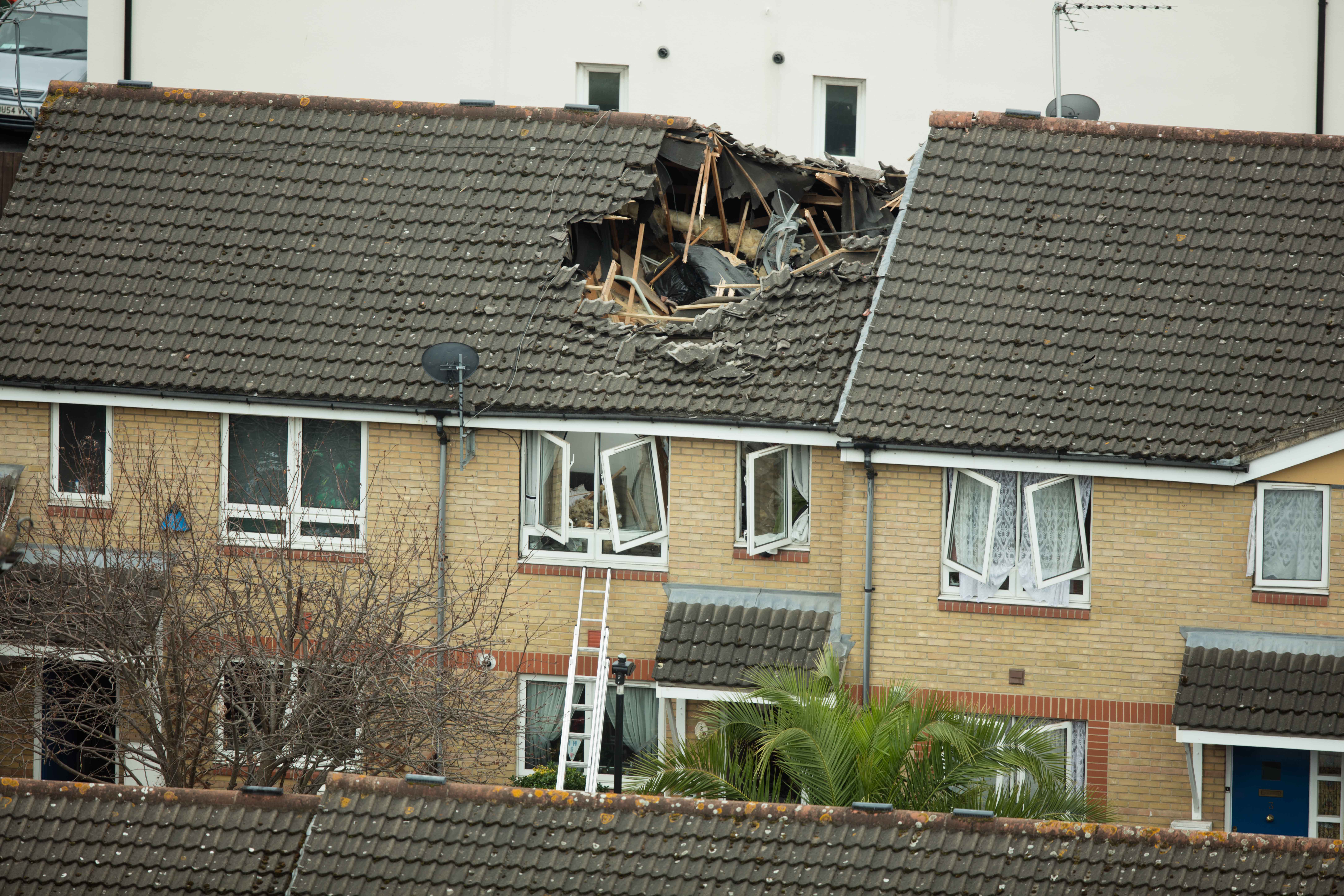 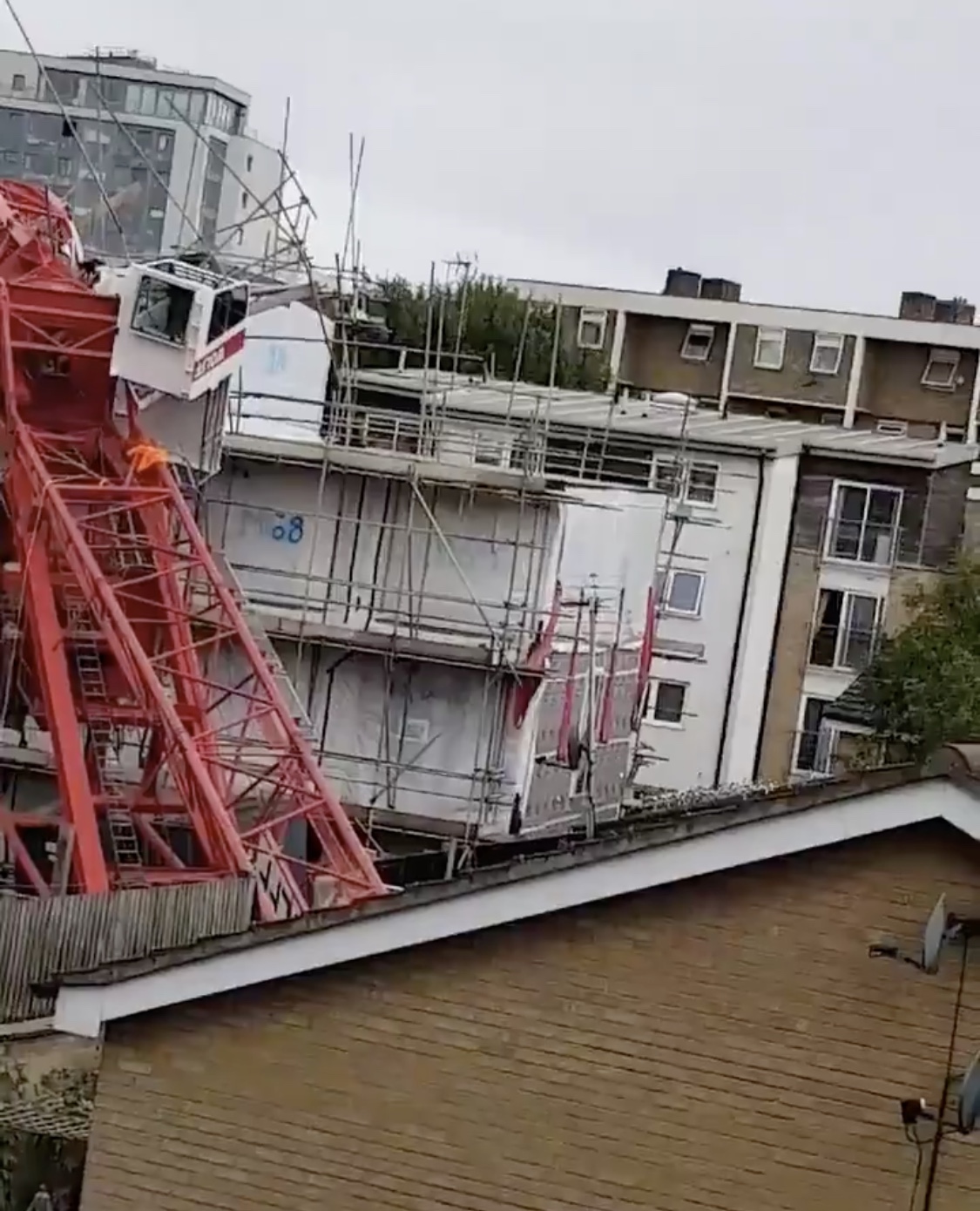 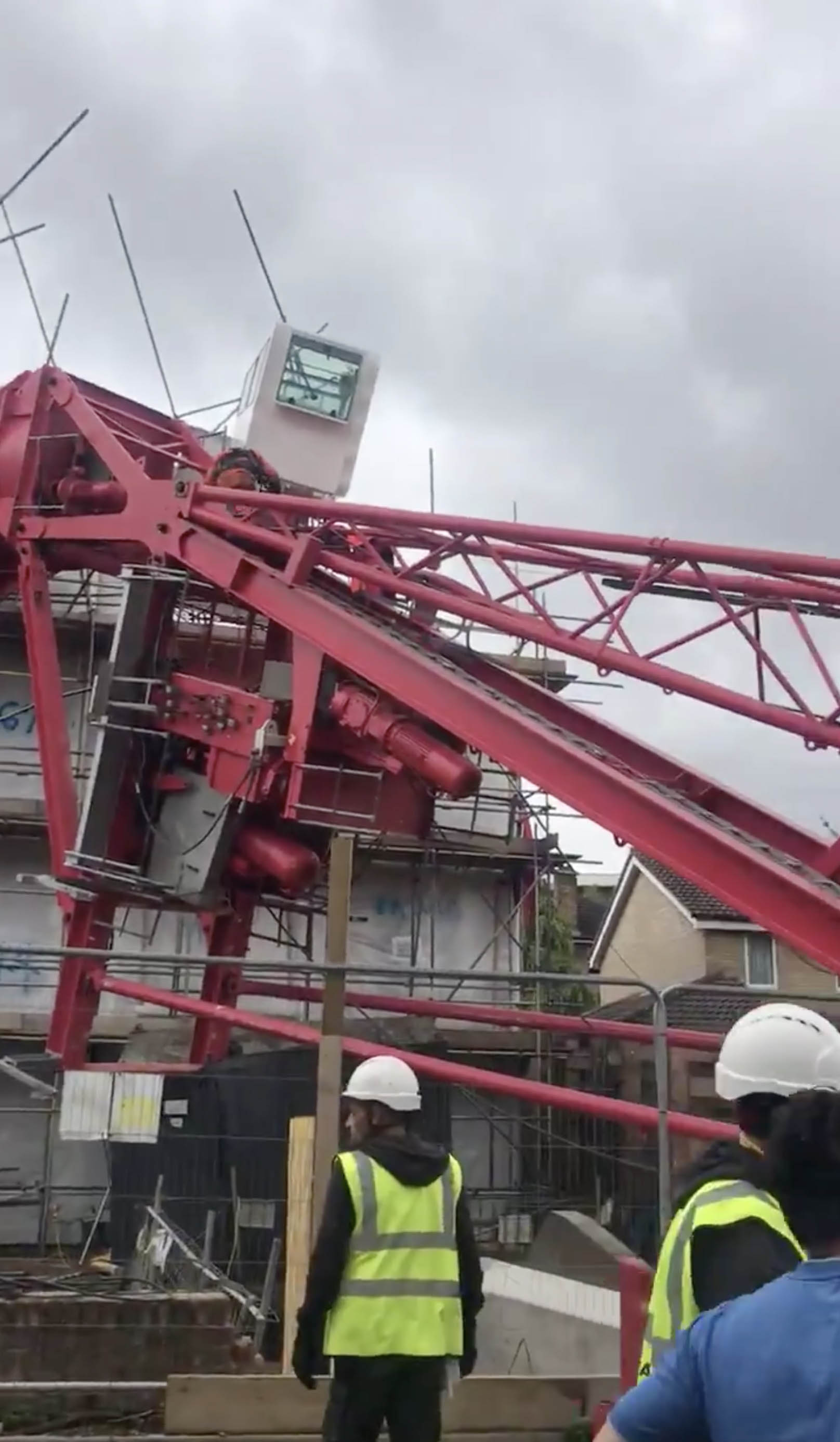 A Met Police statement said: "At approximately 2.39pm police were called to Gale Street to a report of a crane that has collapsed into a residential property and a building site.

"Officers are on scene. We have received reports of four people suffering injuries at this time.

"Road closures are in place and police are assisting the local authority."

London Fire Brigade said it had received more than a dozen calls and crews are currently on the scene.

Assistant Commissioner Graham Ellis said: "A 20 metre crane has collapsed onto a block of flats under development and into two terraced houses on Compton Close.

"Our Urban Search and Rescue crews are undertaking a complex rescue operation and using specialist equipment to search the properties.

"There are reports of that least one person that may be missing and unaccounted for in the houses.

"The London Ambulance Service have confirmed that two people have been taken to hospital with head injuries and a further two were treated at the scene.

"This is a multi-agency response and is likely to be a protracted incident. I would ask people to avoid the area."

The crane that collapsed was being used by Swan Housing Association and NU living.

"A full incident response has been implemented and our staff are on site supporting the emergency services in their response."

Work on the Watts Grove site began in 2018 and the one, two and three-bed shared ownership apartments are replacing an electrical substation building, according to the NU living website.

Mayor of London Sadiq Khan tweeted: "This is a tragedy.

"My heartfelt condolences go out to the family of the victim who died during this incident in Bow today. I sincerely hope that the four individuals injured make a full recovery."

Officials from Tower Hamlets Council have also this evening issued a statement, which reads: "We are incredibly shocked by the crane collapse this evening in Bow and our thoughts are with the families of those affected."

Unite national officer Jerry Swain said there must be "an urgent, full and complete investigation into the circumstances that led to this accident".

He added: "The preliminary findings of which must be released in weeks, rather than months or years, in order to ensure that similar accidents are avoided in the future."

Prior to confirming the death of the casualty, officials from the ambulance service said: "We were called at 2.42pm today to reports of an incident involving a crane collapsing near Watts Grove, Bow.

“We dispatched a number of specialist resources including an advanced paramedic, ambulance crews and our hazardous area response team (HART), with the first of our medics arriving within three minutes.

“Currently our crews have treated four people at the scene. We treated two of these patients for head injuries and took them to hospital and we assessed the other two patients at the scene." 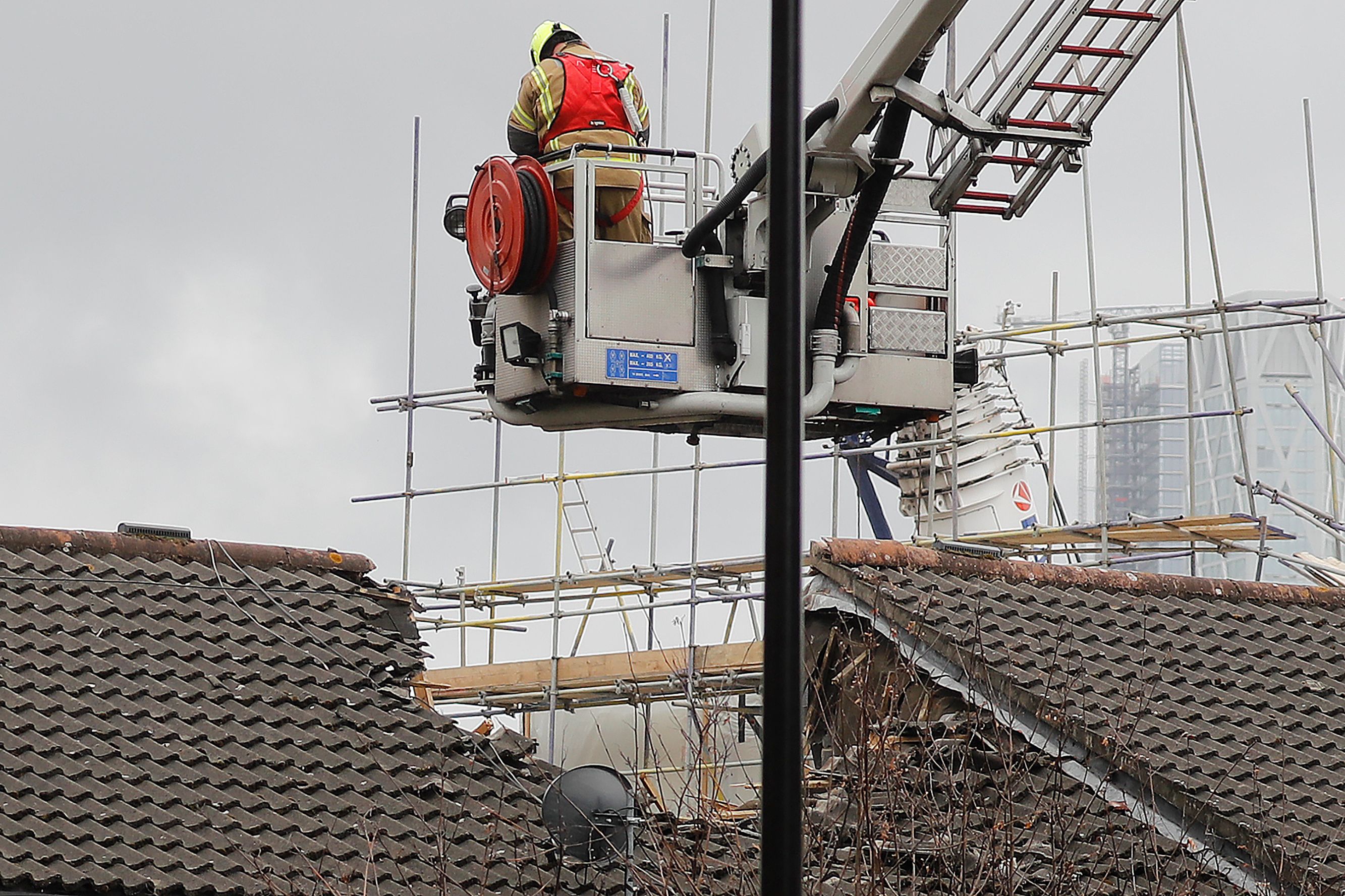 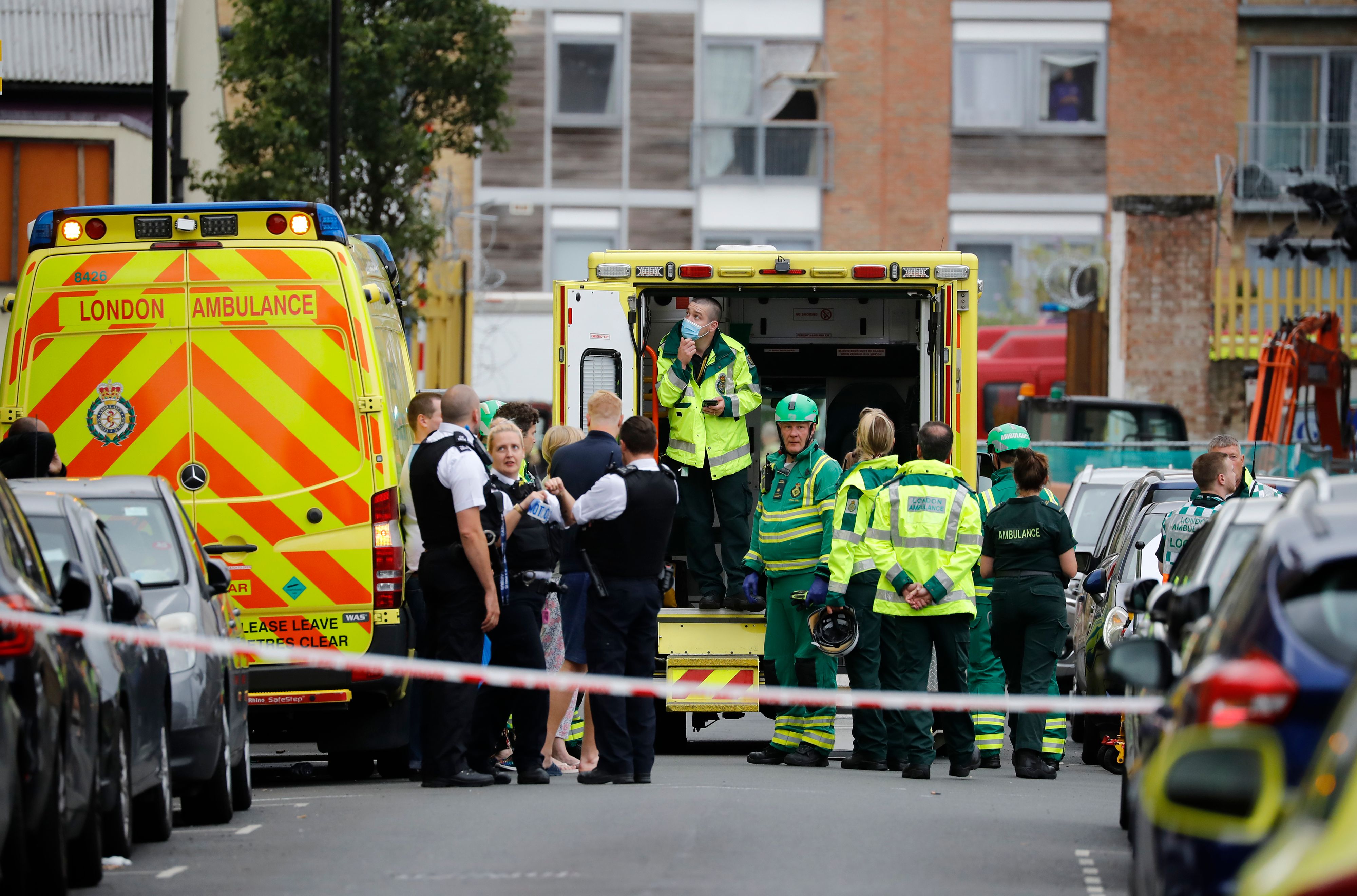 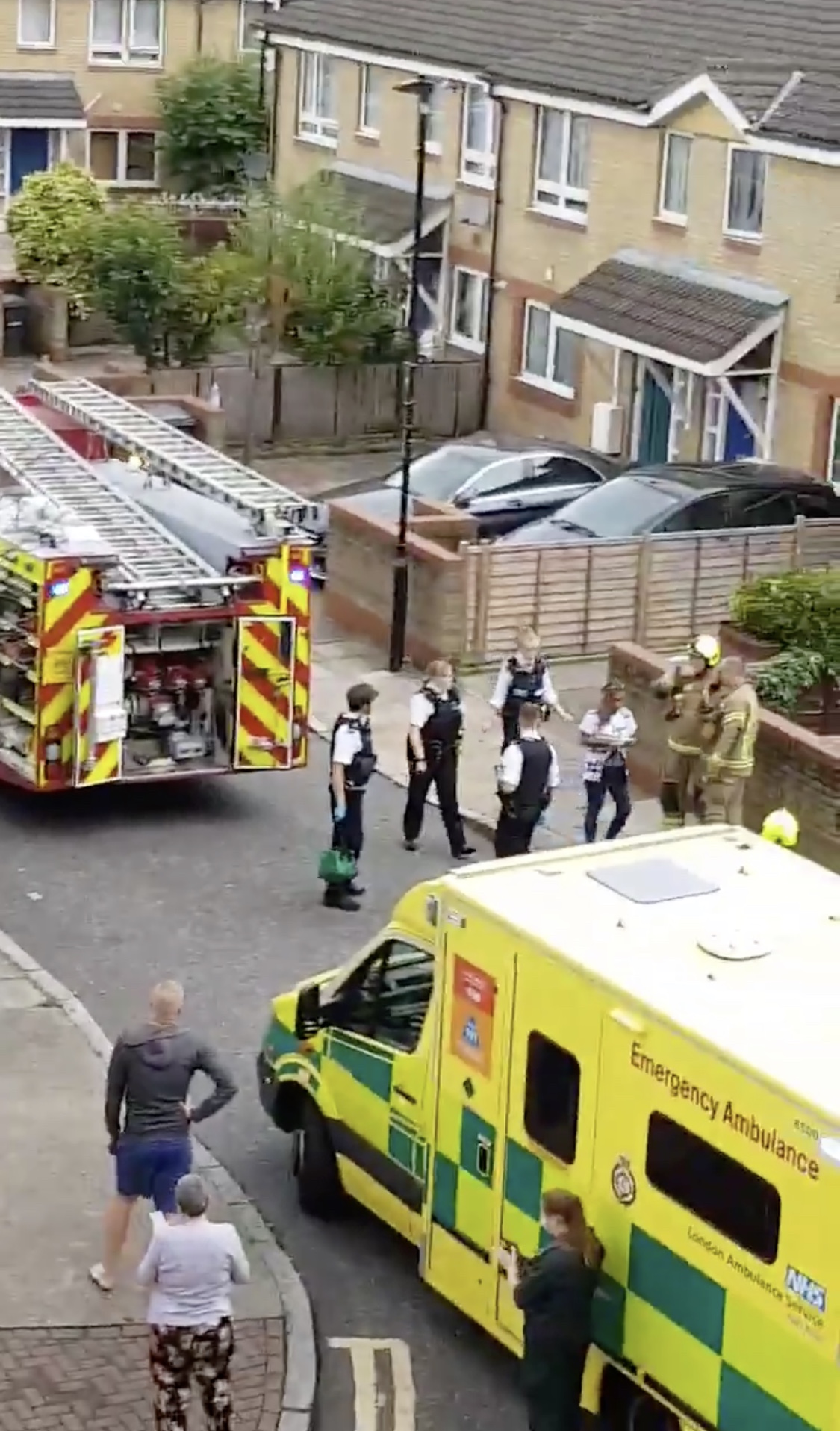 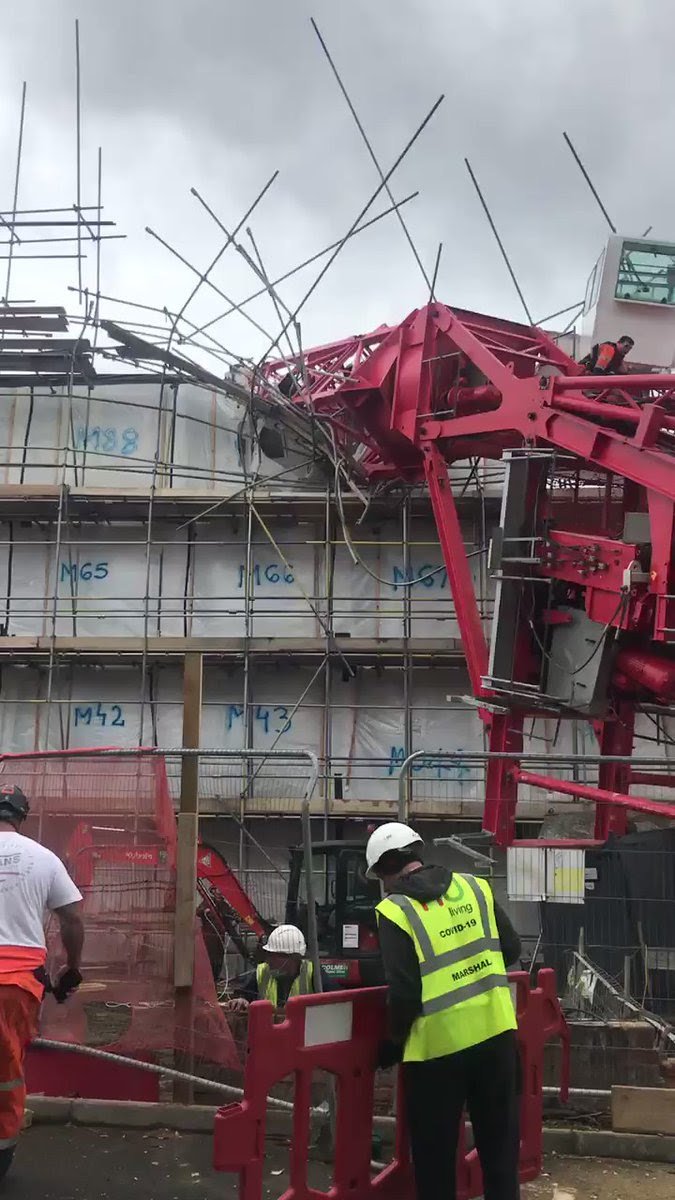 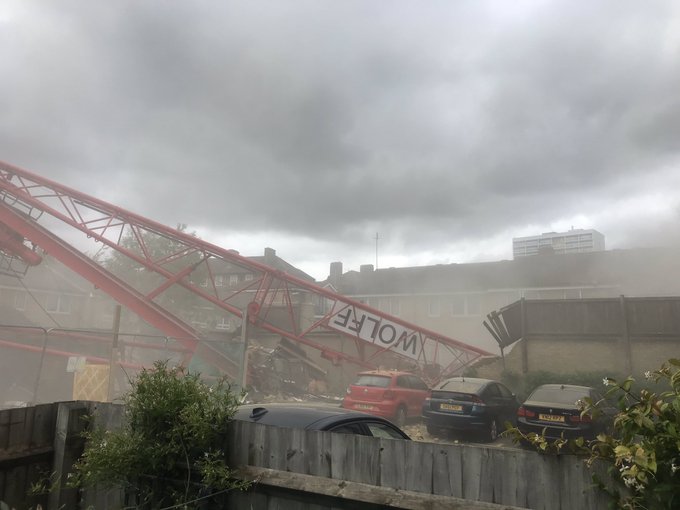