Flash flooding has hit the south east of the UK with the M20 motorway disappearing underwater and motorists being warned to slow down, as the Met Office warns more torrential rain is on the way.

Police in Kent has now issued a warning to drivers telling them to not travel unless completely necessary, after the force received countless calls of roads being flooded.

Some reports suggested that flooding had reached over a foot deep around the county with many cars becoming stranded from the unseasonable weather.

This is while the Kent fire department said they had also been dealing with a number of incident involving surface flooding in the area .

Cars were seen almost floating in the water following heavy rain all day on Monday. Officers have received countless calls of roads flooded, some over a foot deep, around the county 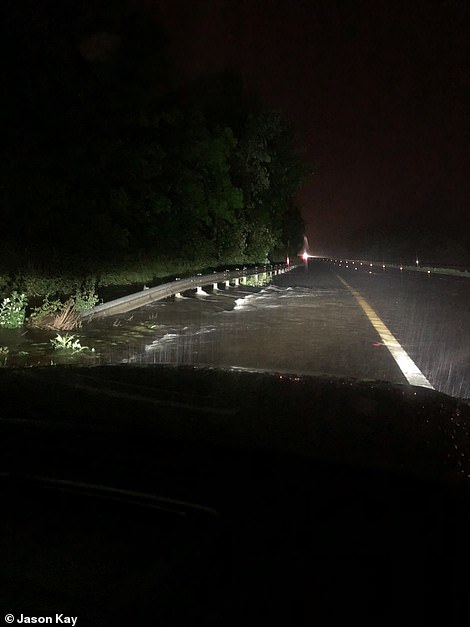 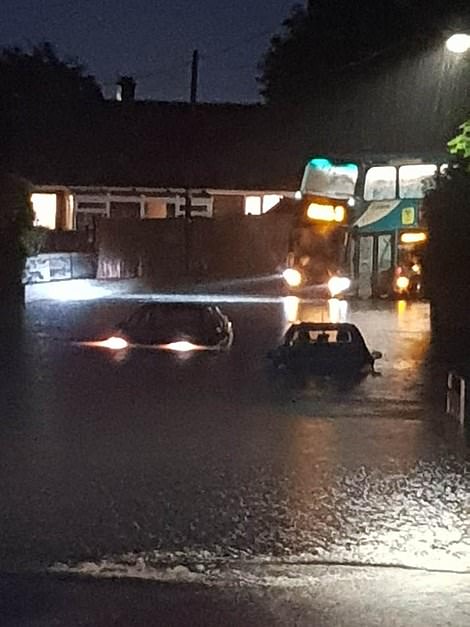 Emergency services in Kent have warned people not to travel due to conditions of the roads (left). The rain has left it impossible for many to get around and cars and buses were seen battling the weather (right) 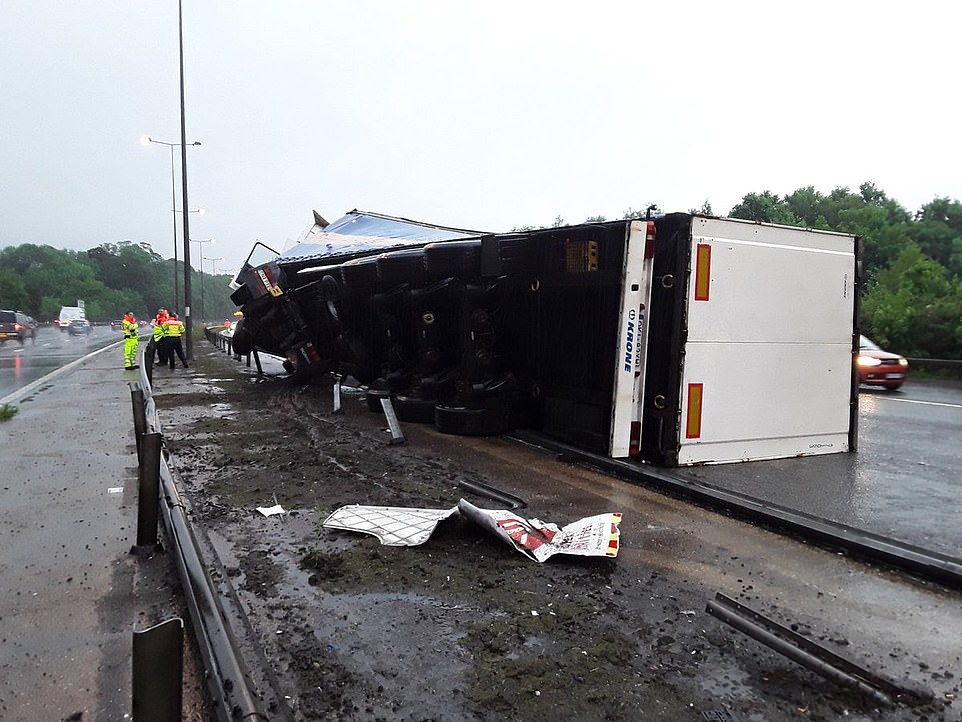 This lorry overturned on the M25 between junctions seven and eight. Police warned of the dangers of driving in bad weather 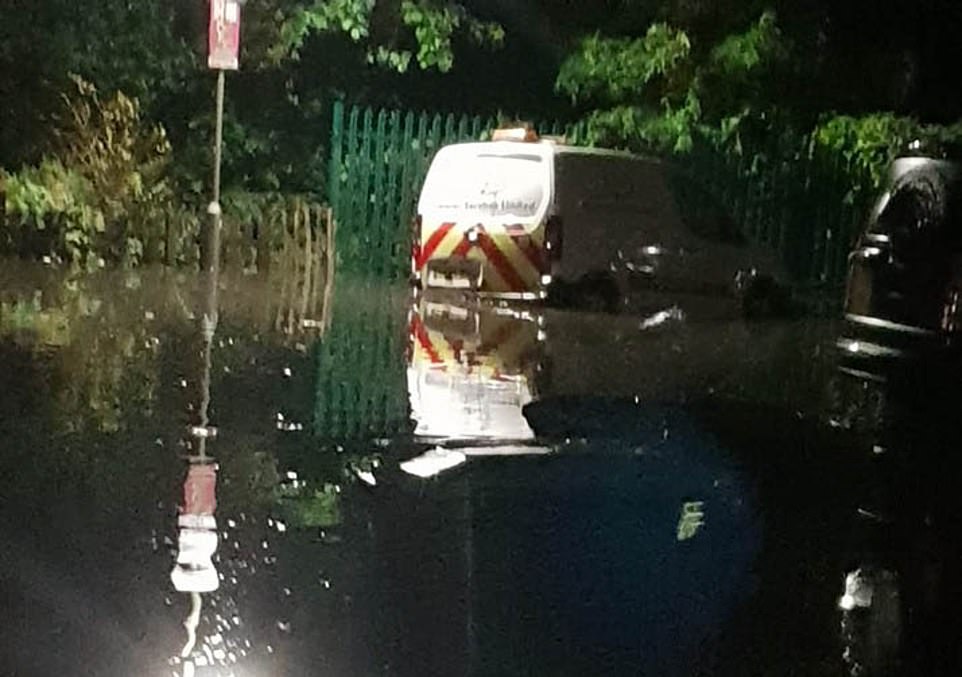 Flash floods struck across Kent. Here the wter shows the reflection of a stranded van. More rain is on the way today

‘The M20 Junction 1-2 where river has burst its banks and now flooding all three lanes of carriageway Amazingly drivers are ignoring warning advising them to slow down!’

Elsewhere in the UK and the Road Policing Unit in Surrey reported that they had attended several road traffic collisions due to drivers going too fast in the wet weather.

The M25 was closed in both directions J7 to J8 serious traffic collision, in which a lorry had overturned.

It comes as the UK endured a washout on Monday as more than a month’s worth of ‘intense’ rain in just several hours and gales blighted the start of summer.

Forecasters at the Met Office had issued a ‘danger to life’ amber warning for London and the Home Counties from 3pm until 11pm yesterday amid fears of homes flooded, train cancellations, road closures and power cuts.

For today (Tuesday) the Met said: ‘It will be a wet commute for many across England & Wales on Tuesday morning, with some heavy and persistent rain places. Brighter with some showers for Scotland & Northern Ireland.’

There are five separate severe weather warnings for rain that do not relent until Thursday, and commuters across swathes of eastern England have been told to take extra care in treacherous conditions on the roads. 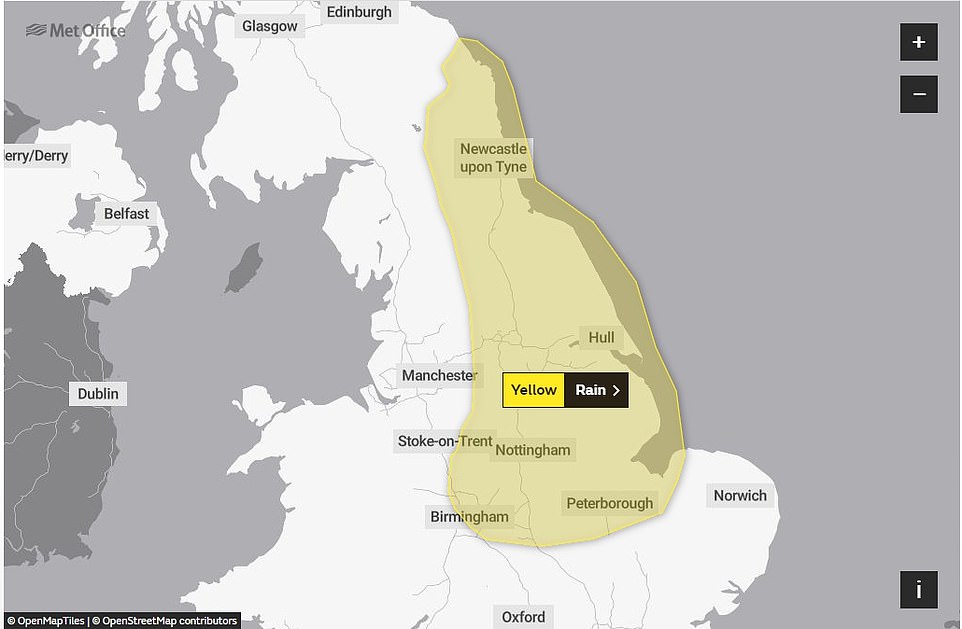 The Met Office issued this weather warning for today, predicting that heavy prolonged rainfall could lead to local flooding and disruption to transport 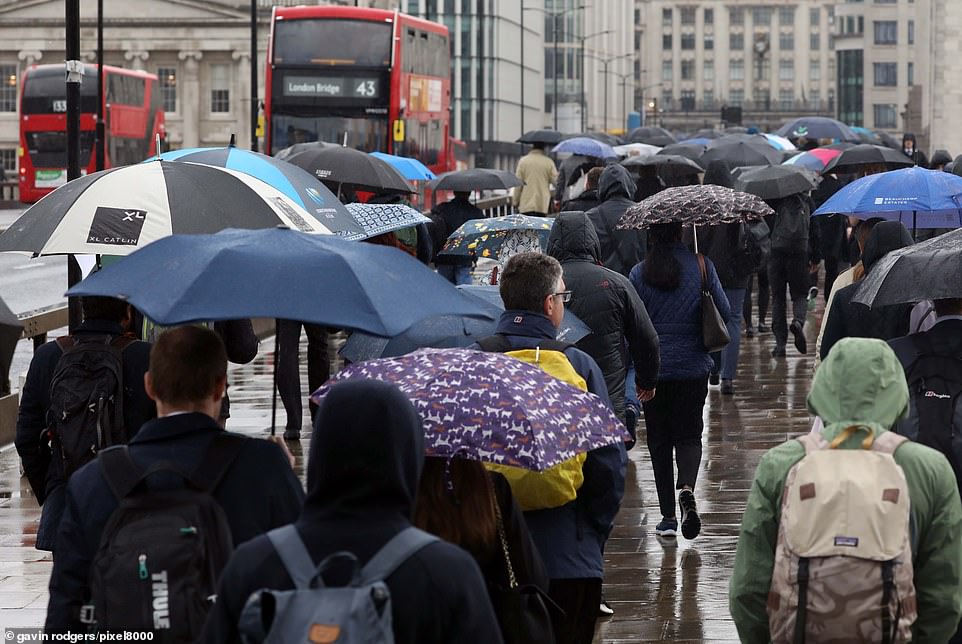 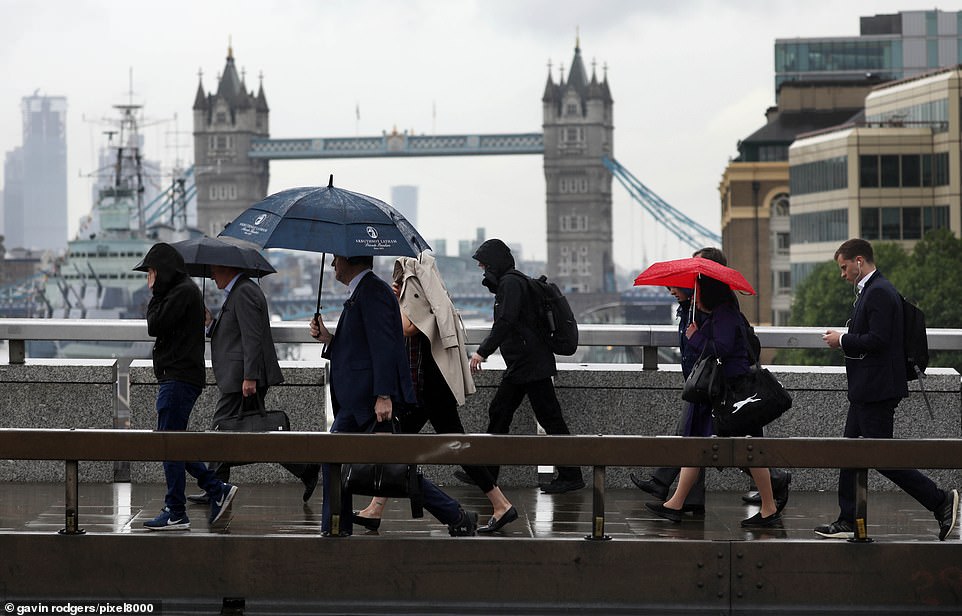 Areas of higher ground will get about 2.5in (64mm) of rain in only 12 hours today, with 40mph winds battering the East coast. The average rainfall for the whole of June in eastern England is just over two inches.

Steve Ramsdale, duty chief meteorologist for the Met Office, said: ‘The development of weather conditions leading to thunderstorms and intense rainfall can happen extremely quickly, creating a challenge for forecasters.

‘We have been able to indicate the likelihood of further spells of heavy rainfall for the rest of the week, but the exact details will remain uncertain until nearer the events. We will update warnings accordingly.’ 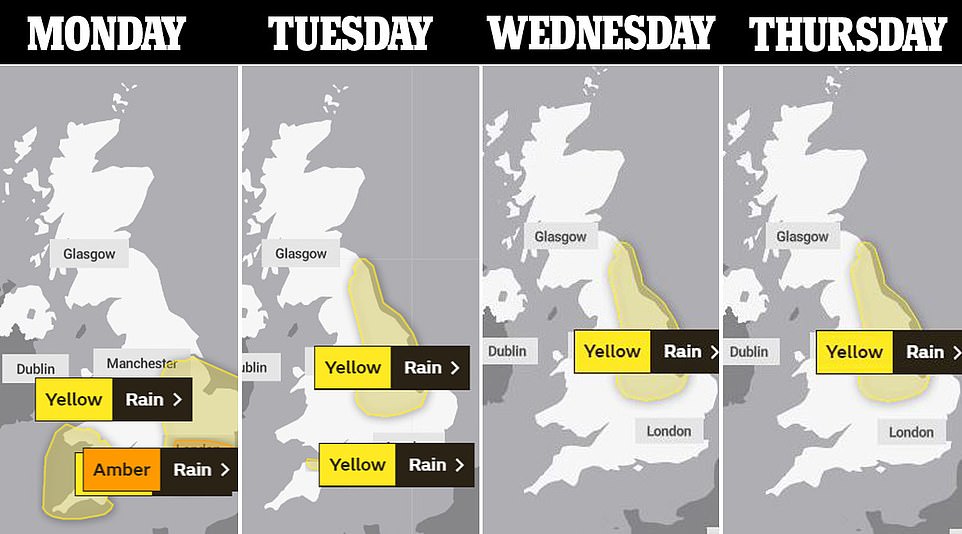 Met Office forecaster Steven Keates said the northern Home Counties, East Midlands, Lincolnshire and Humber could see some of the heaviest and most persistent rain.

Why is the weather so bad in England this week?

Heat across parts of central Europe and a low pressure system approaching the UK from the south are both behind the heavy rain and thunderstorms in England.

The low pressure system is drawing in warmer air from the continent as it moves closer to Britain this week.

The combination of warmer, moist air and low pressure provides ideal conditions for the intense rain and thunderstorms to develop quickly.

He added: ‘The rain started to push in overnight as expected but nothing particularly heavy so far. The heaviest and most persistent rain is still to come.

‘Probably later this afternoon into this evening and tonight we could see some of the heaviest rain. It is going to be more the persistence of the rain in some places and the intensity for others.

‘Eastern and southern England in particular are likely to be seeing long and persistent bad weather. Some places could see a month’s worth of rain in two or three days, and we could see some flooding issues.’

The rainfall and thunderstorms are being triggered by a combination of heat across parts of central Europe and a low-pressure system approaching the UK from the south, drawing in warmer air from the continent.

Even areas not covered by the weather warnings will experience significant showers. Forecasters are warning drivers to expect spray flooding and closures on the roads this week.

There is a small chance of more remote, rural communities being totally cut off by floods, while homes and businesses in eastern areas could suffer flooding and residents should have contingency plans in place.

The Environment Agency has one flood alert on the River Ravensbourne in London covering the boroughs of Lewisham, Bromley, Greenwich and Croydon. 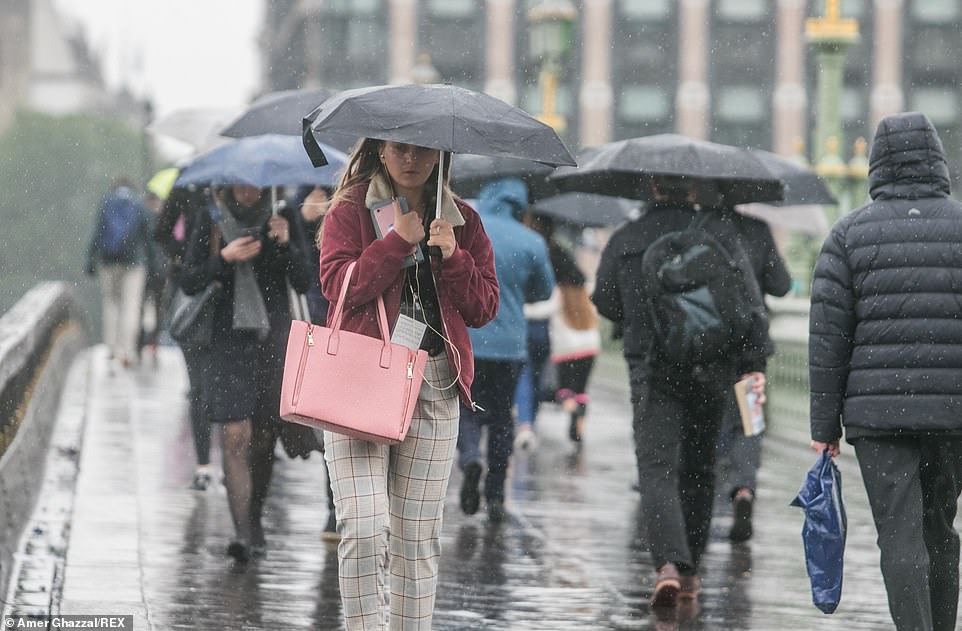