Madison Square Garden sphere in Stratford gets the green light: 300ft-high ‘monstrous glowing orb’ the size of Big Ben with 36million LED lights gets the go-ahead from planners – despite objections from thousands of furious east London residents

A giant music venue branded a ‘monstrous glowing orb’ has been approved by a London planning committee – despite hundreds of residents complaining that it would ‘blight’ the area.

Madison Square Garden’s 300-foot-high ‘Sphere’ was given the go ahead by the London Legacy Development Corporation (LLDC) last night to be built on an empty spot of land between Stratford Station and the Olympic Park.

The music venue, said to cost a reported £800milllion, will contain a 21,500-capacity arena, as well as bars and restaurants, and the project has been hailed as a ‘pioneer in the next generation of immersive experiences.’

It is claimed the sphere, which has been backed by University of East London and former Culture Secretary Matt Hancock, would boost London’s economy by £2.5 billion

Paul Westbury, from MSG, said the application had gone through a ‘thorough assessment’ and the ‘state of the art venue’ would help make Stratford ‘a global destination for music and technology’ and that the plans had been ‘informed by’ feedback from residents.

But the approval faced a furious backlash from local residents over huge LED advertising displays that will be placed around the entire structure which they believe will ‘blight the area’ with noise and light pollution.

A statement from West Ham MP Lyn Brown, opposing scheme, described it as a ‘monstrosity’ and raised fears  about added pressure on local transport and in particular the station at Stratford which already copes with travellers to the Westfield shopping centre and West Ham’s 60,000-seater stadium.

In her statement, which was read by a local councillor on her behalf, she said: ‘The last thing we need is another venue disgorging its audience into an already overcrowded transport hub.’ 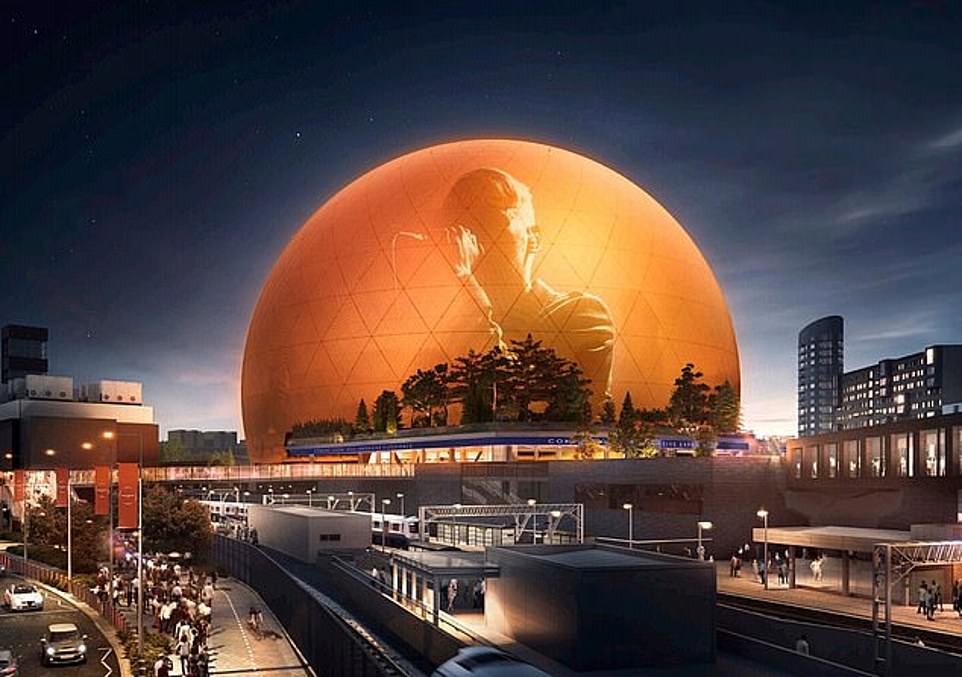 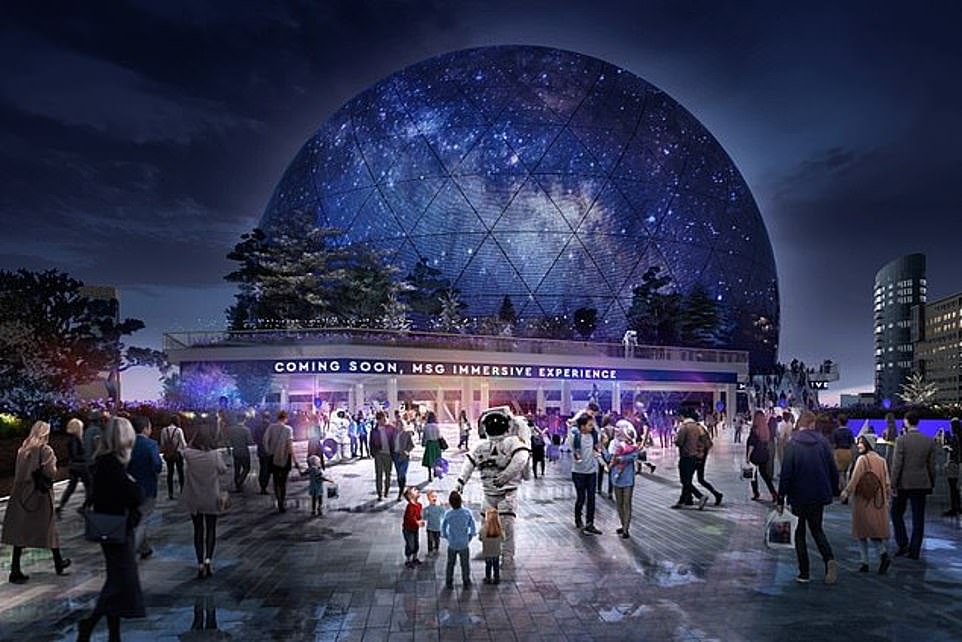 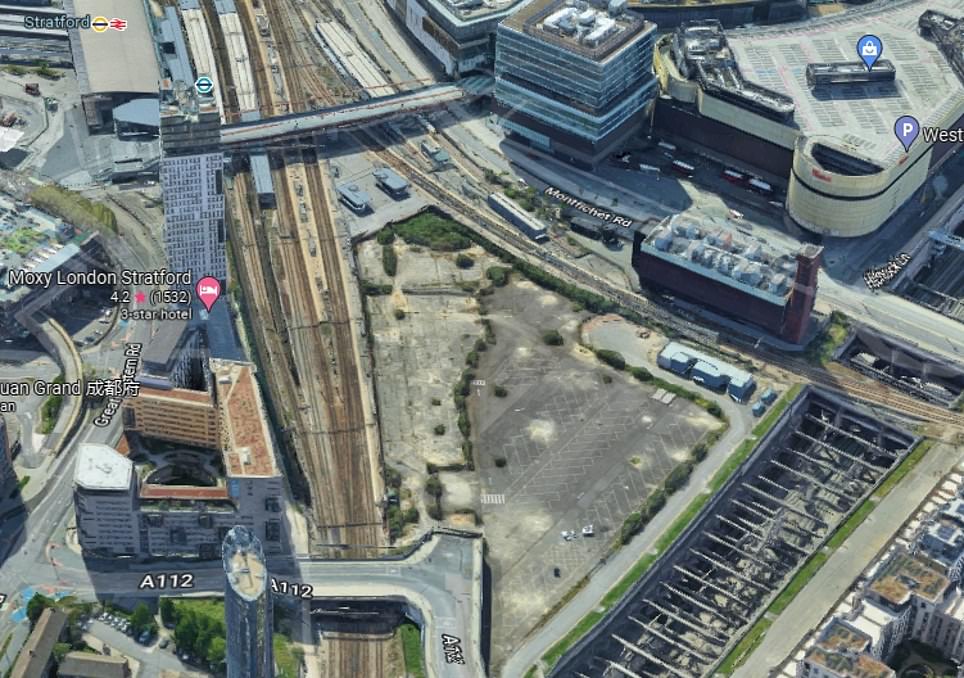 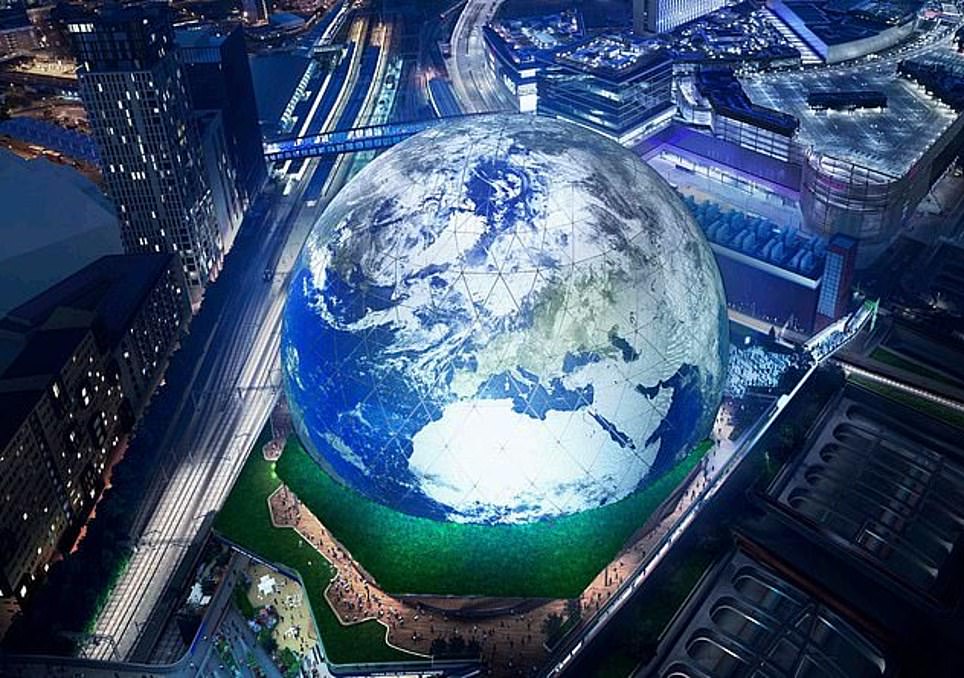 The music venue, reported to come with an £800million price tag, is set to be built on an empty spot of land between Stratford Station and the Olympic Park. Pictured: The current site and proposal

The Labour MP also scolded the LLDC over the fact the site was previously public land which could have been used for housing before it was sold to real estate business Westfield and ultimately to MSG.

‘The LLDC has failed to deliver the positive changes that local residents need… it is also removing the ability of local residents and their elected councils to have an effective say about what gets built in their communities,’ she told the Guardian.

More than 1,000 local residents formally objected to the planning application, while a petition calling for the project to be scrapped received more than 2,000 signatures.

Reacting to news of the approval, Londoner David Hardman said: ‘Words can’t express how disgusting it is that an unelected body can impose an unwanted giant advertising monstrosity in Newham.’

A resident added: ‘Big MSG Sphere coming to London Town. I, for one, am excited by a new venue but then again, I don’t live round there. Nowhere near in fact. Good luck with the flashing lights, all night, every night, Stratford.’ 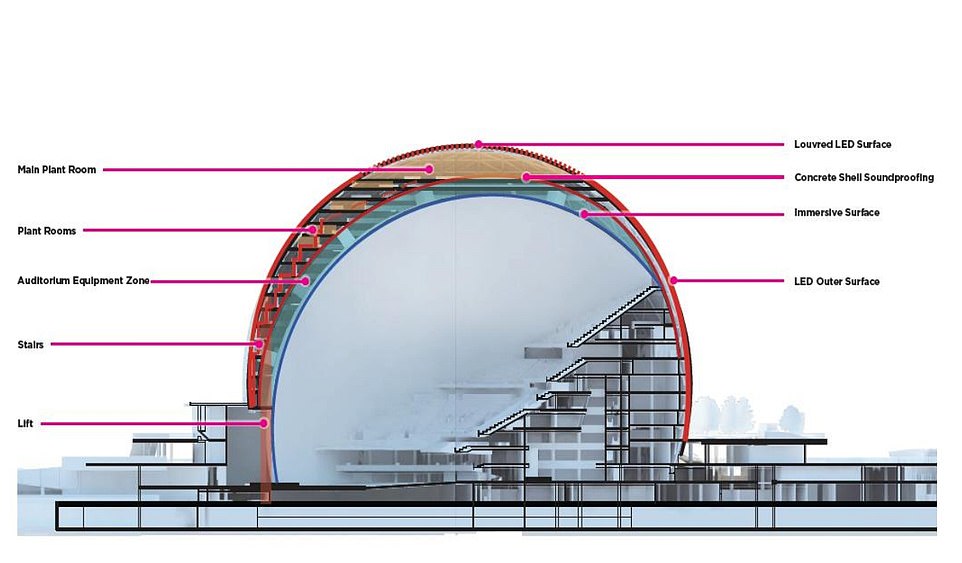 The music venue will contain a 21,500-capacity arena, as well as bars and restaurants, and the project has been hailed as a ‘pioneer in the next generation of immersive experiences’

In objections to the proposal submitted in 2019, local residents shared concerns the venue was cast a shadow over residents homes, increase pollution during a three-year construction process and cause significant light pollution at night.

One objector to the proposals said: ‘I am in deepest concern as this proposed building will be located right on my south side outside my window. Why there is no model to assess the sunshine impact against local community and no model to assess the LED light pollution caused and how this will adversely affect the health conditions of the locals?

‘There must be another way to bring in economics into Stratford and definitely not this 90m high joke.’

Another added: ‘Extreme light pollution and noise, particularly at night, will cause severe harm to residents’ health and wellbeing.’

More than 1,000 local residents formally objected to the planning application, while a petition calling for the project to be scrapped received more than 2,000 signatures

And a further neighbour said: ‘What are the guarantees in terms of light pollution? The first thing my family will see every morning is the sphere. The last thing we will see at night is the sphere.

‘Both bedrooms and the living room have a double window that will open directly out onto the ‘sphere’. Any colour on the sphere will bathe our flat in that colour.’

Protest group Stop MSG Sphere, led by Newham locals, said the arena was ‘as close as 250 feet to residential properties’ and is surrounded by densely residential buildings on three sides.

‘The 190,000-square-foot of LED surface will ensure that advertising will be visible from miles away,’ they added.

US entertainment giant AEG, which owns the O2 Arena in Greenwich just four miles away, also expressed opposition to the MSG Sphere.

An MSG Entertainment spokesperson said: ‘We are pleased that the Planning Committee voted in support of our vision for MSG Sphere. Throughout this process we have worked closely with a wide range of stakeholders, and are grateful for their collaboration which is reflected in our detailed proposal.

‘We now look forward to progressing onto the next steps in the approval process.’

While the sphere and LED lighting display have received planning permission, the project will also need approval by London Mayor Sadiq Khan. 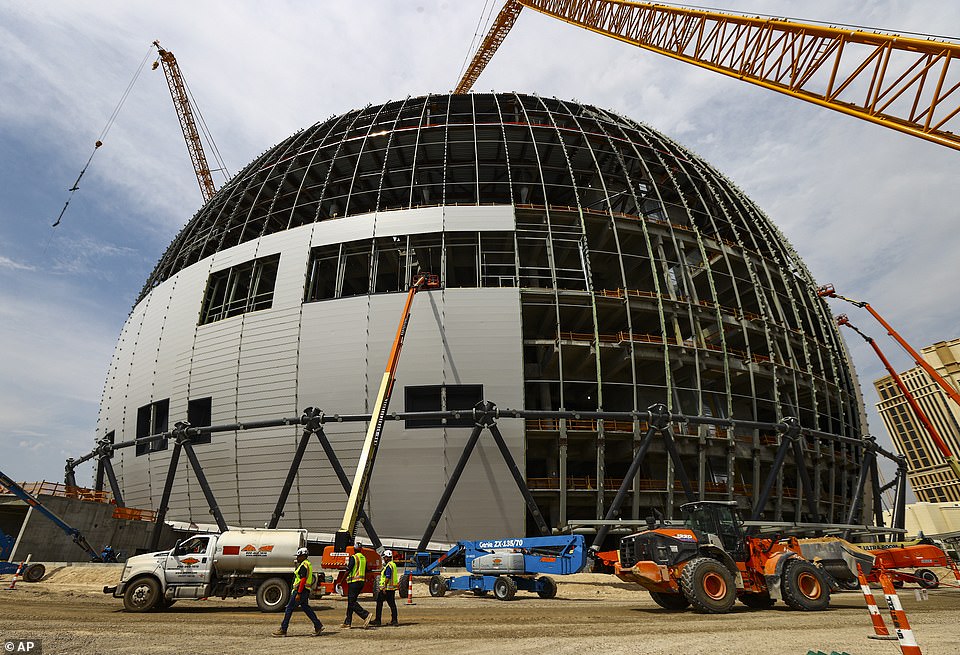 The Sphere, which will have a diameter of 390 feet, is similar to a $1.8billion venue Madison Square Garden is building in Las Vegas (pictured) which is due to open in 2023 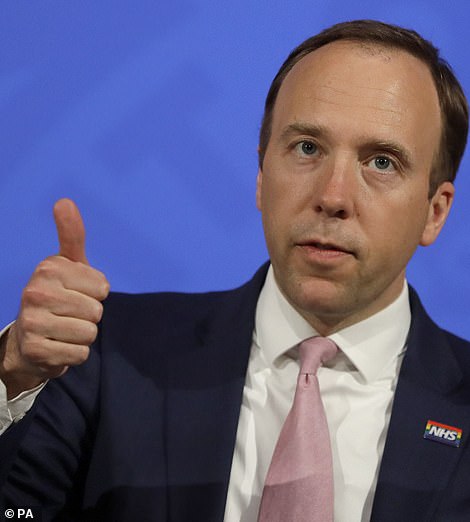 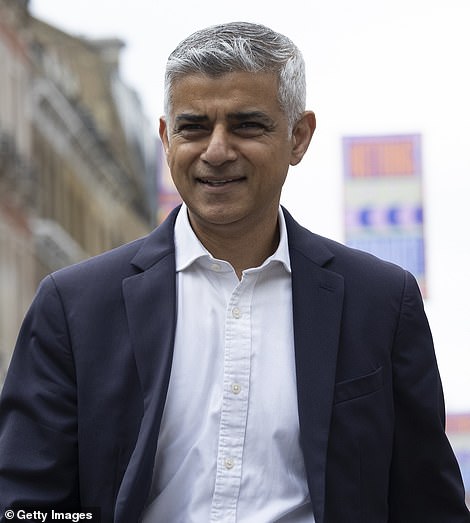 An LLDC spokesperson said: ‘The proposed MSG Sphere has been one of the most complicated applications considered by the planning authority involving significant consultation with local people, businesses and other authorities.

‘The applications have been subject to robust review and a detailed officer report. Following careful consideration, the independent Planning Decisions Committee has approved granting full planning permission for the MSG Sphere, subject to conditions and a s.106 legal agreement securing a wide range of mitigation.

‘The Committee resolved to grant advertisement consent subject to agreement on further additions to the proposed s106 legal agreement.

‘These additions will be reported back to Committee for approval before the application is referred to the Mayor of London. The planning permission will not take effect until a s106 agreement has been signed.’

The Sphere, which will have a diameter of 390 feet, is similar to a $1.8billion venue Madison Square Garden is building in Las Vegas which is due to open in 2023.

In spring 2019, Building.co.uk reported that McLaren was tipped to beat Sir Robert McAlpine to the job which is believed to have a development value of at least £800m. The land for the site was sold to MSG by Westfield for £60million.