Washington: Scientists have discovered the world’s largest bacterium in a Caribbean mangrove.

Most bacteria are microscopic, but this one is so big it can be seen with the naked eye.

The thin white filament, approximately the size of a human eyelash, is “by far the largest bacterium known to date,” said Jean-Marie Volland, a marine biologist at the Lawrence Berkeley National Laboratory and co-author of a paper announcing the discovery in the journal Science. 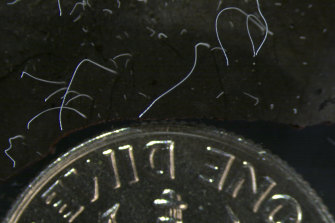 Olivier Gros, a co-author and biologist at the University of the French West Indies and Guiana, found the first example of this bacterium — named Thiomargarita magnifica, or “magnificent sulfur pearl” — clinging to sunken mangrove leaves in the archipelago of Guadeloupe in 2009.

But he didn’t immediately know it was a bacterium because of its surprisingly large size — these bacteria, on average, reach a length of 0.9 centimetre. Only later genetic analysis revealed the organism to be a single bacterial cell.

“It’s an amazing discovery,” said Petra Levin, a microbiologist at Washington University in St Louis, who was not involved in the study. “It opens up the question of how many of these giant bacteria are out there — and reminds us we should never, ever underestimate bacteria.” 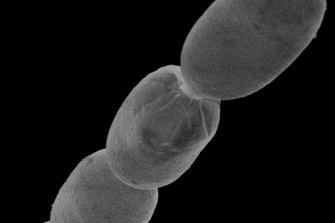 The species was discovered among the mangroves of Guadeloupe archipelago in the French Caribbean. Credit:Berkeley Lab/AP

Gros also found the bacterium attached to oyster shells, rocks and glass bottles in the swamp.

Scientists have not yet been able to grow it in a lab, but the researchers say the cell has a structure that’s unusual for bacteria. One key difference: it has a large central compartment, or vacuole, that allows some cell functions to happen in that controlled environment instead of throughout the cell.

“The acquisition of this large central vacuole definitely helps a cell to bypass physical limitations … on how big a cell can be,” said Manuel Campos, a biologist at the French National Centre for Scientific Research, who was not involved in the study.

The researchers said they weren’t certain why the bacterium was so large, but co-author Volland hypothesised it may be an adaptation to help it avoid being eaten by smaller organisms.