Deceased were mostly shot in the back, Boubou Cisse says, as he visits site of massacre that killed almost 100 people. 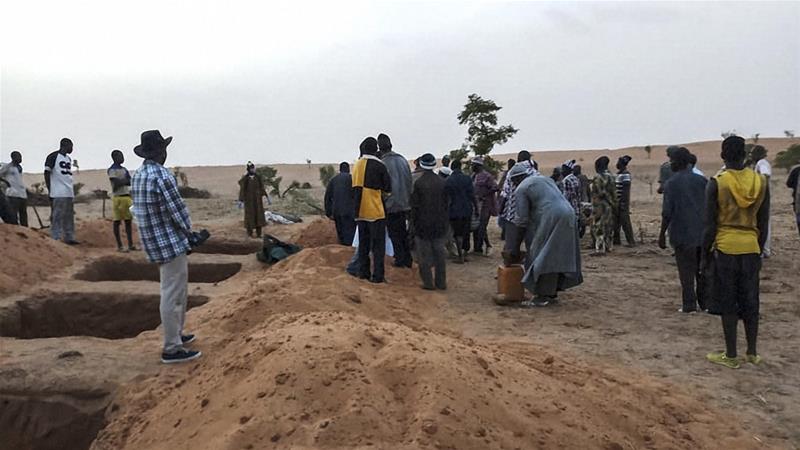 Bodies recovered from a massacre of scores of people by a Malian ethnic fighter group included at least 24 children, the prime minister of Mali said during a visit to the crime scene on Tuesday.

Attackers believed to belong to the Fulani ethnic group raided the rival Dogon village of Sobane Da, in central Mali, between Sunday and Monday. They killed at least 95 people, who were mostly shot in the back, in an escalation of the tit-for-tat ethnic slaughter that has engulfed the mostly Saharan nation this year.

“All these victims of horror and barbarity remind us of our responsibility as leaders to reinforce and accelerate security,” said Boubou Cisse, who became prime minister in April.

“May the soul of these innocent victims of discord and hatred rest in peace.”

Survivors described attackers arriving on motorbikes and in trucks and surrounding the village of roughly 300 people. They murdered anyone who tried to escape and torched their homes, they said.

Violence between Dogon hunters and Fulani herders has killed hundreds since January, including an attack in March in which gunmen killed more than 150 Fulani, one of the worst acts of bloodshed in Mali’s recent history.

Following the latest massacre, President Ibraham Boubacar Keita announced that he would cut short a trip to Switzerland “to be by my people’s side in their pain,” according to a statement from his office.

“This country cannot be run by a cycle of revenge and vendetta,” he told ORTM public television in Geneva on Monday.

Keita called on Malians to unite to “allow our nation to survive, because this is a question of survival”. He is expected to visit the site of the incident on Wednesday.

Malians have grown increasingly frustrated by the government’s failure to protect them from intercommunal and hardline violence.

Malian authorities have launched a criminal investigation into the latest atrocity, and local officials say 35 bodies have so far been identified at the massacre site.

Despite a 4,500-strong French force in the Sahel region, hardline attacks have multiplied since they first intervened in 2013 in an effort to push back hardliners and allied Tuareg rebels who had taken over the northern half of the country.

Since then, ethnic conflicts have turned bloodier than ever.

Hardline fighters have long exploited tensions between ethnic groups in the Sahara and Sahel to boost recruitment and sow chaos, efforts which now appear to be bearing fruit.

Attacks spread from northern to central Mali, an ethnic mosaic, after a predominantly Fulani group led by preacher Amadou Koufa emerged in 2015.

Unidentified assailants killed 19 people and wounded 13 in an attack on Sunday in and around the town of Arbinda in northern Burkina Faso, where a mix of Malian and Burkinabe fighters and allied criminal gangs have stepped up attacks since December.

There are currently about 14,700 troops and police deployed in Mali, which ranks as the most dangerous United Nations mission, with 125 peacekeepers killed in attacks since deployment in 2013.

Donor countries to MINUSMA, the UN peacekeeping mission in Mali, are to meet at the Security Council on Wednesday to decide whether to renew the mission or not. The decision is expected to be made by June 27.