Passing time on a family holiday almost half a century ago, Peter Taylor jumped off the Port Arlington pier for a dive that would change the future – and history – of underwater knowledge in Victoria.

The rusted, rotten and long-forgotten fishing boat he accidentally found on the sea floor that day was nothing of archaeological significance. 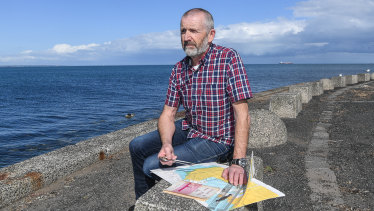 Peter Taylor, one of Victoria’s greatest shipwreck hunters, has made some of the most significant finds in the state.Credit:Justin McManus

But to pre-teen Peter, the moment was "beyond belief".

"The thrill’s never left," he said. "Going out. The hunt. The skill and the research and putting it all together.

"It’s just the excitement and the drama. That’s what it’s all about, I suppose. Some people go big-game hunting or fishing."

Finding shipwrecks became something of an obsession,and the fishing boat discovery as a child has now become "20 or 30" shipwrecks as an adult, including some of the most significant finds in the state's history.

Like the Alert, which sunk off Cape Schanck in 1893, taking the lives of all but one of the 16 crew with it in what was one of the worst maritime disasters in Victorian history.

And the Kanowna, a 130-metre ocean liner that ran aground off Wilsons Promontory in 1929 before drifting into Bass Strait and sinking in 80 metres of water.

Mr Taylor spent nearly three decades as part of the team that in 2011 finally found the Coramba, which capsized off Phillip Island during a storm on November 30, 1934, killing all 17 on board. 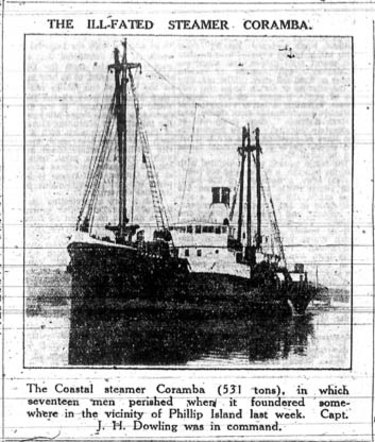 An Age report on the wreck of the Coramba.Credit:Michelle Stillman

Some of his most satisfying work is finding the final resting places of long lost mariners. He receives emails and letters from grateful descendants the world over. One time, a family drove from Queensland to thank him personally.

"It is rewarding in that way, when people can find closure," Mr Taylor, 62, said.

"When we found the Glenelg [which sank in 1900, killing 38] off Ninety Mile Beach there was a lot of closure there for people. Again people sent emails. It does have a lot of emotion. They're small vessels but they're big stories because there’s a real human element to them." 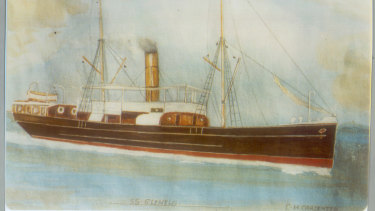 The SS Glenelg sank near Lakes Entrance in one of the worst maritime disasters in Victorian history.Credit:Courtesy of the Carpenter Family

Mr Taylor conducts his amateur sleuthing as part of the Maritime Archaeology Association of Victoria and has become such a "champion" of the game he advises the professionals at Heritage Victoria. 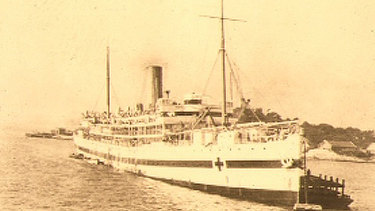 The SS Kanowna sank off Wilsons Promontory in 1929Credit:Heritage Victoria

"He’s got a huge library and he searches endlessly," said Peter Harvey, Heritage Victoria's senior maritime archaeologist. "The man never watches TV. He studies the old shipping records and other obscure things. He’ll tunnel through every bit of history he can find.

"He’s found some of our most significant shipwrecks. Deep ones that have been lost for ages. He’s got a brilliant record for it."

Since he retired from 40 years of work and teaching stonemasonry, Mr Taylor can more or less work full-time at his passion, which now includes a PhD study into the Port of Melbourne during the Gold Rush years.

He said the hunt usually began with researching shipping and boat-building almanacs, before the trail would take him to old government gazettes and newspapers.

"The newspapers often record slightly different versions," he said. "One might have a clue that’s missing from another. So it’s building up a picture and trying to hone in on an area."

Then it's off to "mow the lawn" – tracing back and forth over a grid of a couple of square kilometres using sonar and a magnetometer, which detects metallic anomalies on the sea floor.

"Sometimes you get a run where you find everything works well and you find a few wrecks in a row. Other times you might go 10 months without finding anything," he said. "But usually, once a year, I try and find a new site."

His dream wreck is the Reliance, a paddlesteamer that sank off Cape Schanck in 1869.

"It was only a small vessel, but it’s at the transition stage between sail and steam," he said. "That would be a really neat little find. We’ve put quite a few years into that."

LEGGINGS are an essential part of a wardrobe and a true staple that work for layering as well as lounging.

LEGGINGS are an essential part of a wardrobe and a true staple that work for layering as well as lounging.