BERLIN (Reuters) – German Chancellor Angela Merkel sat down rather than standing at a public ceremony on Thursday, a day after a third bout of shaking in three weeks raised concerns over her condition, but said she was taking care of her health. 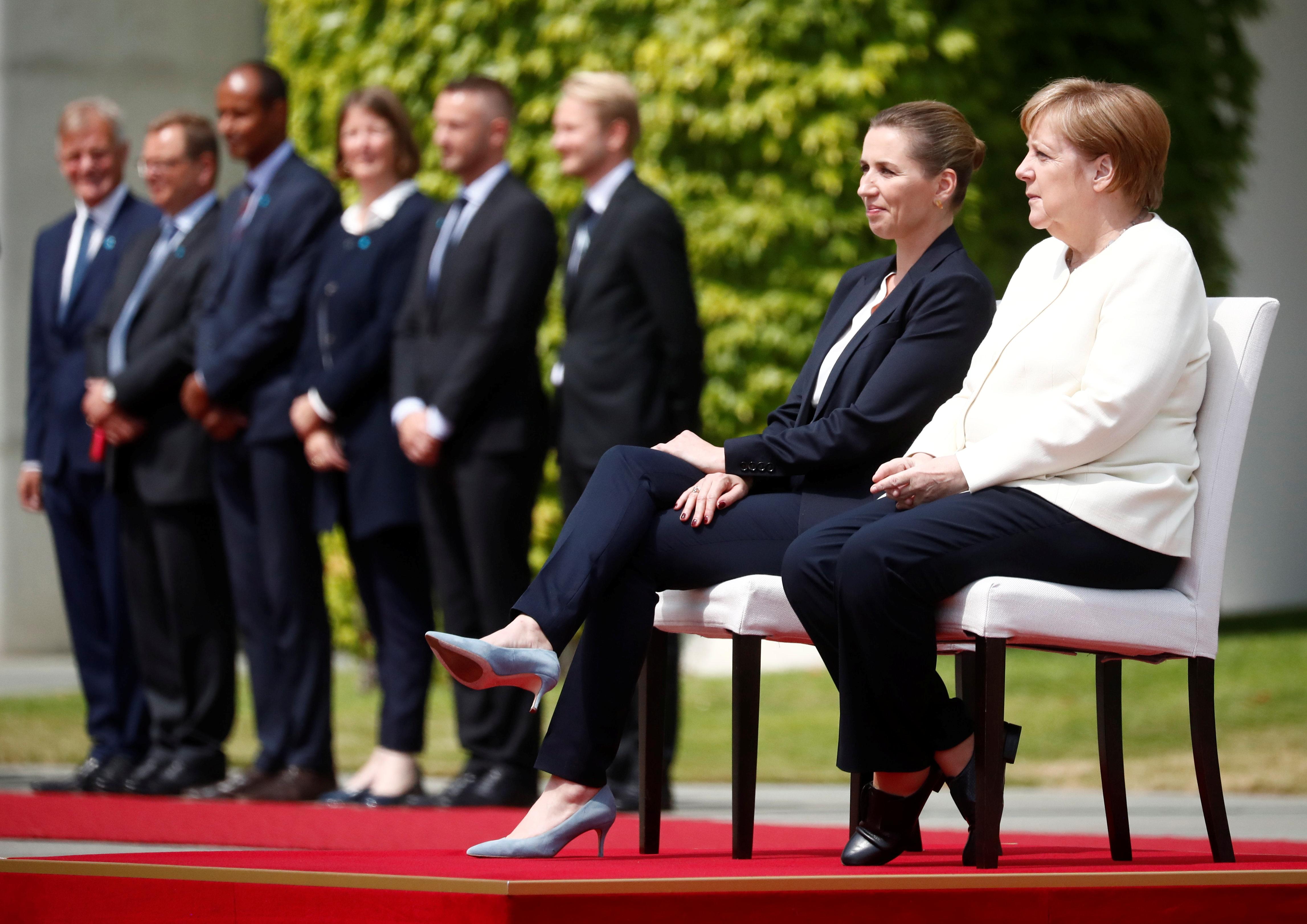 The 64-year-old Merkel sat next to visiting Danish Prime Minister Mette Frederiksen at a welcome event with military honours, held on a warm day in Berlin. Then the two women walked to the chancellery for talks.

Merkel, who shook visibly during a ceremony welcoming Finnish Prime Minister Antti Rinne on Wednesday, showed no sign of tremors on Thursday and smiled broadly.

Merkel, in power since 2005 in the European Union’s largest economy, is under growing pressure to explain her condition.

“I am aware of the responsibility of my office,” Merkel, asked about her health, told a news conference after meeting Frederiksen. “I behave appropriately as far as my health is concerned.”

“Also as a person, I have a major interest in being healthy and I look after my health,” the chancellor said. Merkel, who turns 65 next week, said with a smile that every birthday made her aware that she is getting older.

The chancellor has no history of serious health issues. Her office has given no explanation for the shaking episodes and Merkel herself has given no details of any medical advice or treatment she has been given.

At Thursday’s news conference she was asked if she had consulted doctors about the shaking bouts and if she could say anything about the results, but she was not asked about her decision to sit during the ceremony.

Merkel decided to seek a fourth term in office only after long reflection, and said in November 2016 she was seeking to stay on “if health allows”. In 1998, she was quoted as saying: “I don’t want to be a half-dead wreck when I leave politics.”

Her fourth term is due to run until 2021 and she has ruled out running for a fifth term.

After meeting Rinne on Wednesday, Merkel said she was “working through” a bout of shaking that first occurred in mid-June, but insisted she was fine and that “just as it happened one day, so it will disappear”.

Manfred Guellner, head of pollster Forsa, said Merkel should be more transparent as many people looked to her for assurance in difficult times and were unsettled.

“Merkel is the guarantee of stability and many people want her to serve a full term,” he told Reuters. “To talk about ‘working it through’ is not really sufficient. It looks quite dramatic. She really has to say what the matter is.”

Mass-selling daily Bild asked after Wednesday’s third episode whether Merkel should say more about her health.

Medical experts have played down speculation about the shaking, saying there are multiple potential causes of tremor.

Merkel is renowned for her work ethic and has a reputation for outlasting other leaders at EU summits with her ability to focus on the details of complex discussions deep into the night. 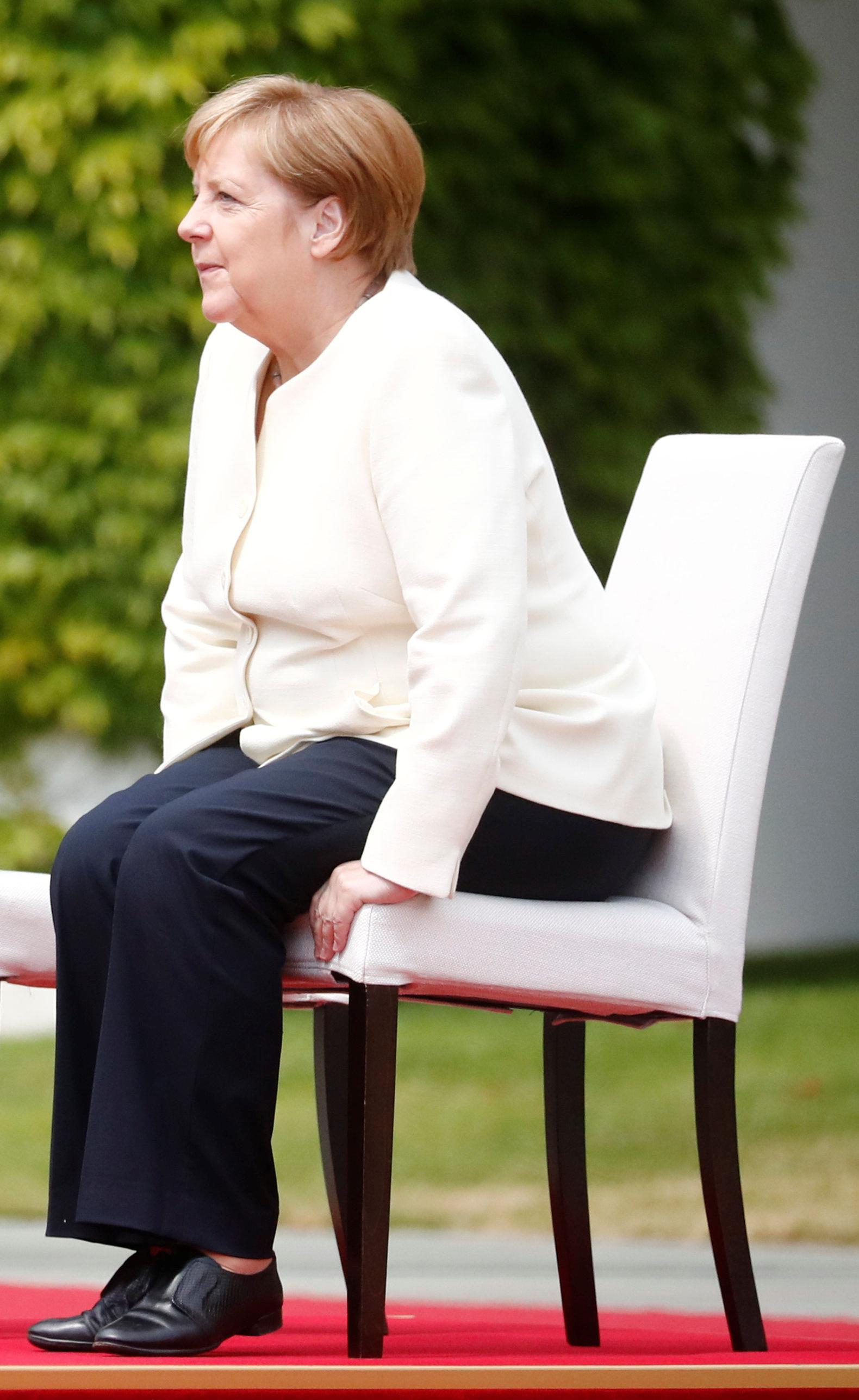 “When you ask me that directly about how I experienced the chancellor, I’d say just as strong and competent as my impression was before I came to Berlin today.”

In the United States, portions of the results of the president’s annual medical examination are traditionally made public, but in Germany, political leaders are generally expected to enjoy more privacy around their health.

Merkel is famously private, only rarely making public appearances with her husband. This is a stark contrast to her predecessor Gerhard Schroeder – who faced questions in office about his marriage and whether he dyed his hair.