THE Milk Crate Challenge is the latest craze to engulf the internet – and it has finally landed in the UK, seeing hilarious videos sweep the nation.

The controversial trend requires participants to stack a staircase of crates and climb up to reach the other side – simple enough. 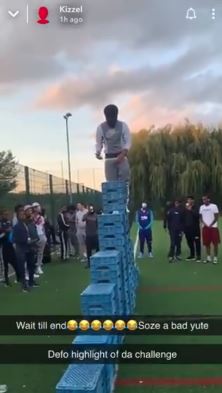 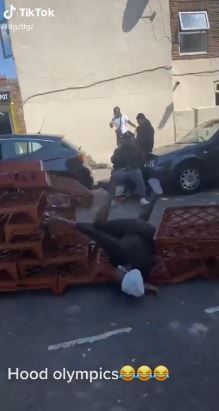 But it is not as easy as it sounds, as the haphazard structural pyramid struggles to support the weight of most people, seeing them spectacularly tumble to the ground.

After quickly catching on across the US, it wasn't long before the fad flew across the pond to the UK. Well, better crate than never.

Using the hashtag #MilkCrateChallenge social media sites such as Twitter, Instagram and TikTok have been flooded by people's attempts at the tricky trend.

Thousands of memes have also been inspired by the viral challenge.

Now brave Brits are having a go at the Milk Crate Challenge – inspired by the impressive display of athleticism at the Tokyo Olympic Games just last month.

Sheer boredom has also been blamed for the milk crate mania, which some have dubbed the "Hood Olympics" – due to the inventive use of a simple everyday object.

Others claim the challenge originated from a 2011 YouTube video by JoyRidersTV Bonus Footy, that shows a man sprint across a milk crate staircase before falling and injuring his back.

This then encouraged Facebook users Kenneth Waddell and Jordan Browne to try it out and sparking a wave of copycat clips.

In one rib-tickling clip, a man is seen ascending the staircase sideways as the crates buckle beneath him.

As he reaches the top, he takes a sensational fall from grace and tumbles straight onto one of the columns – much to the crowd's amusement.

Another shows one youngster strategically making his way to the top of the crates and while he briefly gains his composure, one observer slide kicks the structure.

The milk carts collapse beneath him before the clip quickly cuts off – leaving social media users wondering if he would have triumphed and how much it hurt.

In true British style, one woman attempting the challenge instead uses bread trays, seemingly to offer a wider surface area to balance upon.

But after making her way up just five of the so-called steps, she loses her footing and takes a nosedive into the ground.

Some competitors have delicately glided up the staircase without so much as a wobble – but the masses have been ended up in a heap on the floor.

Despite the entertainment the trend has provided, it is clear the Milk Crate Challenge is not to be taken lightly – and at your own risk.

Some fails have seen people break bones or badly injure themselves after falling and Americans have claimed on social media that hospitals are filling up with Milk Crate Challenge competitors.

The ordinary milk crate might seem sturdy enough but when they are stacked up on top of one another they provide little stability.

The situation is made worse with many attempts taking place on grass which doesn’t provide a smooth, flat surface – but no doubt gives a softer landing for those who come crashing down. 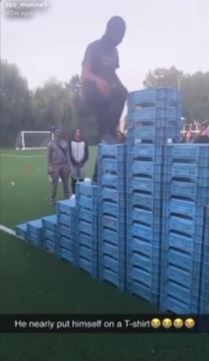