This is the moment a suspected gunman stumbles into a barber after shooting dead three Kurds on the streets of Paris.

William M. allegedly opened fire in a bustling part of the 10th arrondissement near the Gare du Nord at noon, days after he was bailed from prison to await trial for allegedly trying to murder two Sudanese refugees last year.

One woman and two men were killed and at least three others seriously injured, sparking ‘total panic’ as bloodshed returned to the streets of the French capital.

According to local media, the victims include a Kurdish artist who was ‘prosecuted in Turkey for his art’ and recognized as a political refugee, along with a woman who had recently made a failed bid for political asylum in France.

Of the three wounded people, one was being given intensive care in hospital and two were treated for serious injuries, officials said.

New footage purporting to show the alleged gunman making his way into a nearby barber shop is now circulating online. 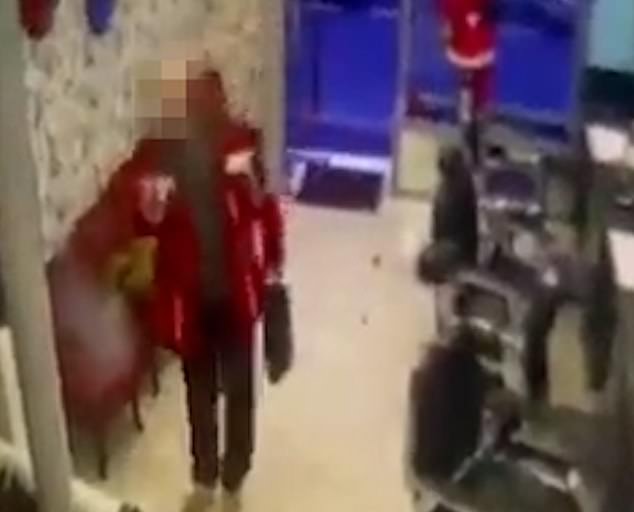 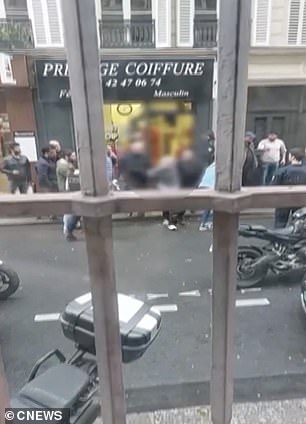 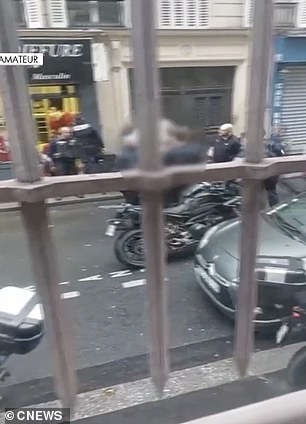 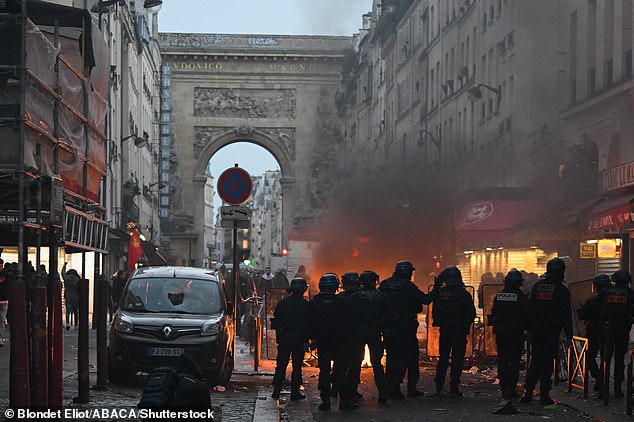 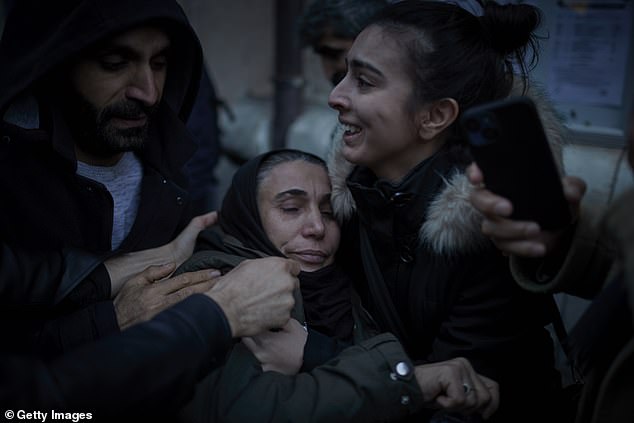 Pictured: A woman nurses another protester who collapsed during violent clashes on Friday evening

In the vision the man, wearing an outfit which matches that of reports describing the gunman, limps into the store, clutching what appears to be a handgun.

The footage appears to show the alleged gunman shooting again multiple times in the direction of customers and staff.

Patrons were already in hiding by the time the man entered the store, cowering just beyond the eyeline of the camera.

But a skirmish appears to take place in the far left corner, and the man is detained.

Some customers appear to flee while other men begin making calls and await the arrival of authorities. Local media reports one of the men seen fleeing was shot in the foot, but escaped with his life.

The video has reportedly been taken from the barber’s own CCTV camera.

MailOnline verified the footage by comparing the interior of the hair salon with pictures online of the moment the suspect was arrested.

Separate pictures of the moment he was arrested show the suspect in the same khaki coloured shirt, dark trousers and light sneakers. 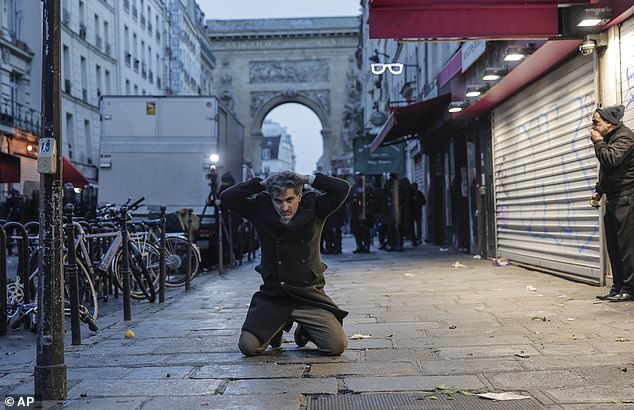 A member of the Kurdish community kneels on the ground as he is detained during clashes with the police in Paris, near the site of a shooting earlier today 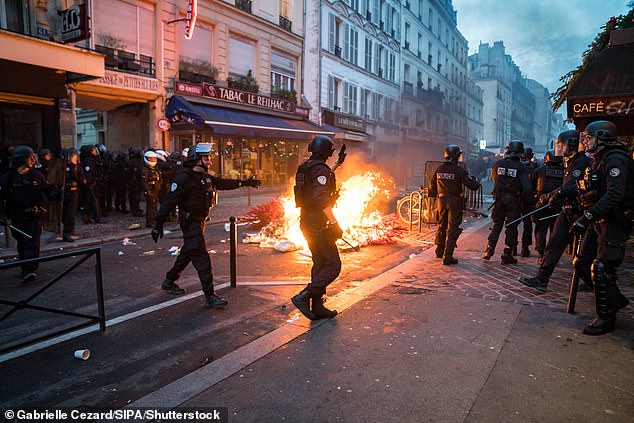 Some demonstrators were chanting in support of the Kurdistan Workers’ Party, an organisation designated as terrorist by Ankara, the European Union and others

The assailant, reportedly born in Paris, was arrested at a salon and taken to hospital for treatment for serious facial injuries.

After the arrest, a witness said: ‘He was calm, with nothing in his head. It’s not normal to have someone like that who has just killed people and who is serene.’

He was released from prison just 12 days ago, pending a criminal trial after he allegedly attacked migrants with a sword at a Parisian camp in December 2021.

In June 2016, he was convicted of armed violence by a court in the northeastern suburb of Seine-Saint-Denis, which he appealed.

A year later, he was given a suspended six-month prison sentence for illegally possessing firearms, judicial sources told AFP.

Paris prosecutor Laure Beccuau said the question of whether Friday’s attack was motivated by racism ‘will obviously form part of our investigations’. 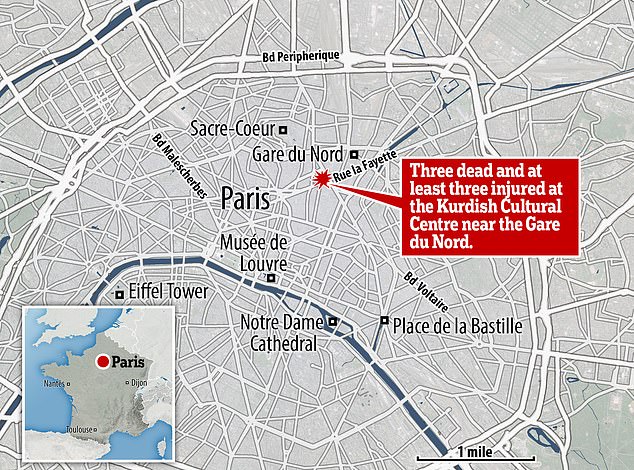 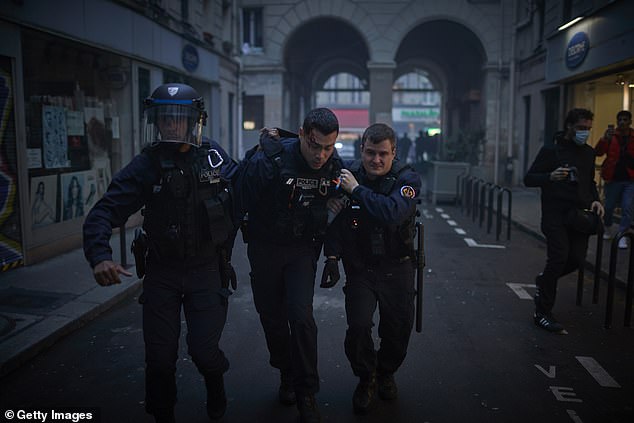 Pictured: An injured French Policeman is helped away from the scene of pandemonium 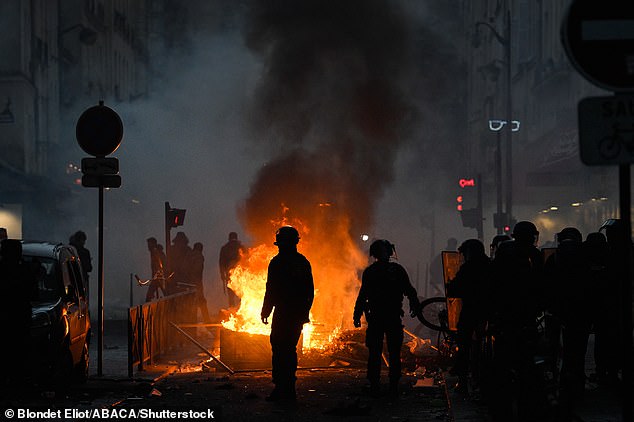 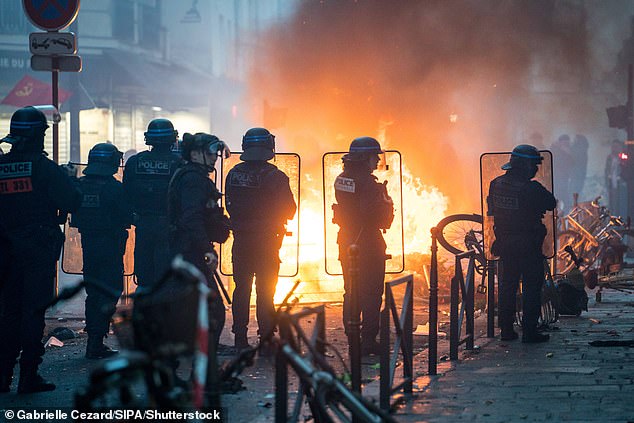 Interior Minister Gerald Darmanin said the man ‘was clearly targeting foreigners’, but that it was ‘not certain’ he had aimed to kill ‘Kurds in particular’.

He was also a member of a shooting sports club ‘and has several registered weapons’, Darmanin said.

Key questions for French authorities in the coming days include why the suspect was out on parole, with left-wing opponents already accusing President Macron’s government of failing to take far-right threats seriously enough.

‘The far-right appears to have struck again. With deadly consequences,’ senior hard-left MP Clementine Autain wrote on Twitter. ‘When will those at the head of the state start taking this terror threat seriously?’

Beccuau stressed, however, that ‘nothing enables us to establish at this stage that this man belongs to an ideologically extreme group’.

The suspect’s elderly parents, aged 91 and 93, were quoted in local media discussing his ‘crazy, idiotic’ behavior. 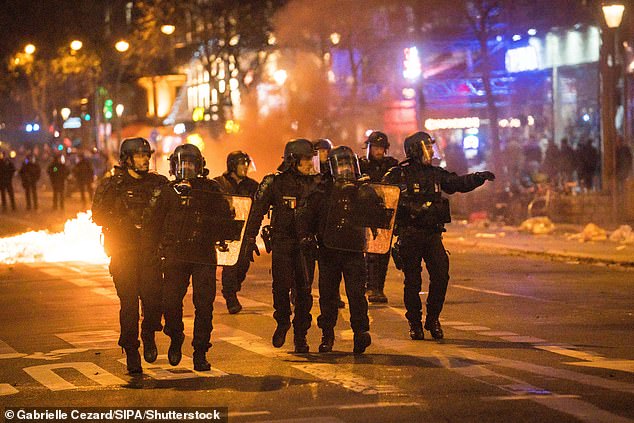 Five police are among the injured in Paris this evening after demonstrators set fire to the streets in response to the tragic deaths of three Kurds, who were massacred by a ‘racist’ gunman in the heart of the city 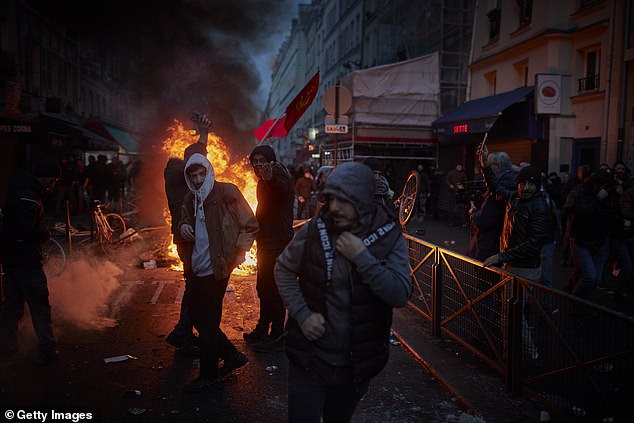 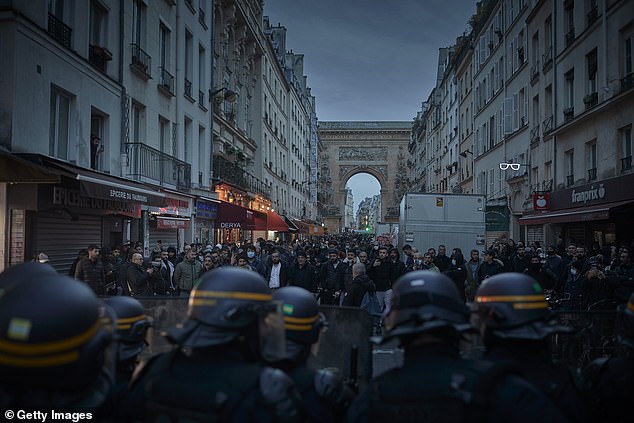 Protesters, who were mainly of the Kurdish community, were voicing their concerns of feeling unprotected in France

His father said he had been living with them in the 2nd arrondissement since his release from prison.

Just hours before the attack, on Thursday night, he was playing Scrabble with his mother. Neighbours described him as ‘strange’ to the same publication.

The bloodshed sparked pandemonium in the streets of Paris on Friday as demonstrators clashed with police.

Local media reports five officers were injured and at least one protester has been arrested.

Riot police fired teargas as night fell to drive back the angry crowd gathered a short distance from the scene of the shootings. 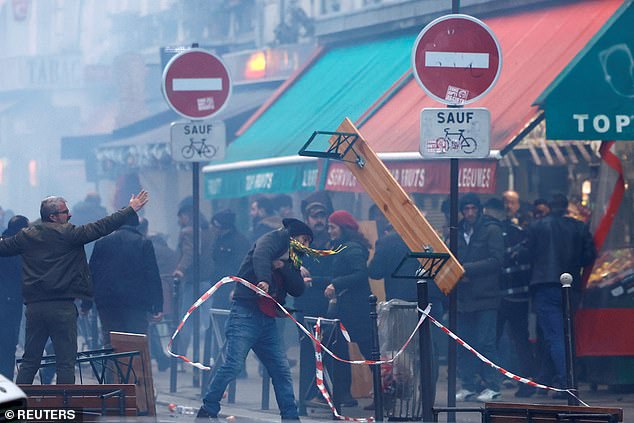 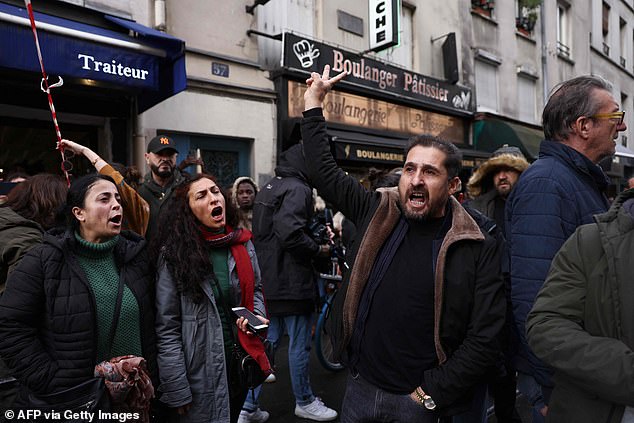 After the attack, Kurdish people gathered and started chanting after the perceived attack on their community 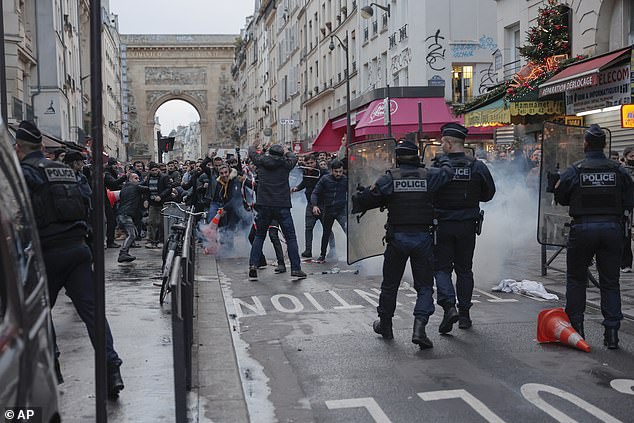 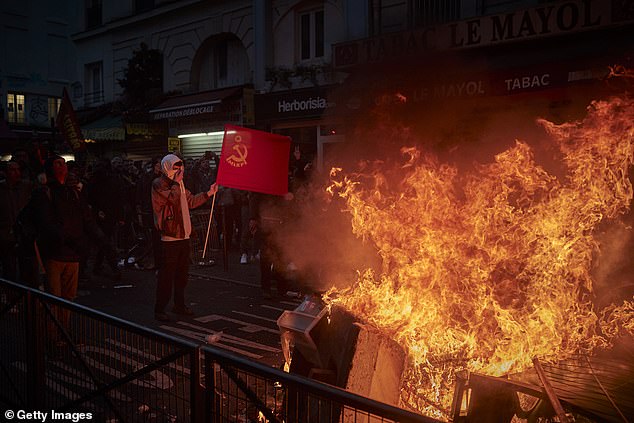 Graphic pictures from the area surrounding the Ahmet-Kaya Kurdish Cultural Centre show officers dragging their colleagues from the riots as protesters collapse and tear gas fills the air.

The Kurdish Democratic Council of France (CDK-F), an umbrella group for Kurds in France which uses the cultural centre as its headquarters, said in a statement it considered the shooting to be a ‘terror attack’.

Abdulkarim Omar, the representative of the Kurdish-led autonomous administration in northeast Syria to Europe, condemned the attack as a ‘cowardly terrorist act’.

Some members of the Kurdish centre could be seen weeping and hugging each other for comfort after the shooting which revived traumatic memories of the murders of three Kurdish activities in January 2013.

‘It’s starting again. You aren’t protecting us. We’re being killed,’ one man shouted at police at the scene. 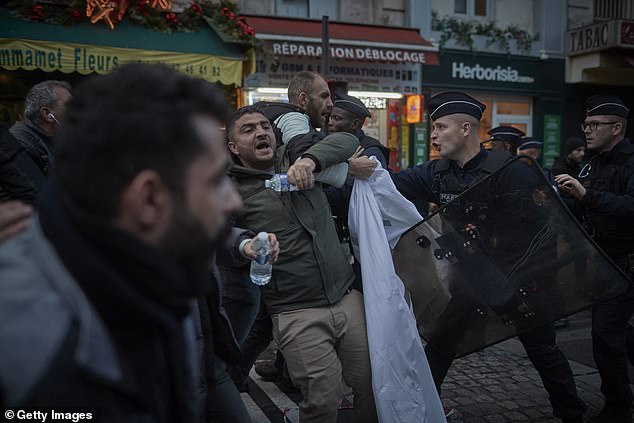 Emotional protesters, mainly from the Kurdish local community, clashed with police on Friday

The 2013 murders were widely believed to be the work of a Turkish intelligence agent, but the Turkish man arrested and charged with the killings died in 2016 shortly before his trial.

Often described as the world’s largest people without a state, the Kurds are a Muslim ethnic group spread across Syria, Turkey, Iraq and Iran.

‘The Kurdish Democratic Council of France condemns in the strongest possible terms this vile terrorist attack which occurred following multiples threats from Turkey, an ally of Daesh,’ it said, using an alternative name for the Islamic State terror group.

There is no indication of Turkish involvement in Friday’s violence. 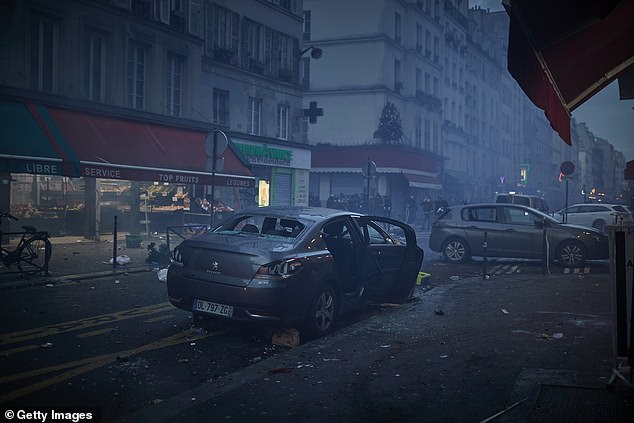 An investigating source said today: ‘It appears that he is a far-right racist fanatic who was targeting anyone who looked like an immigrant.

‘He started shooting people around the 10th arrondissement and was himself wounded during a confrontation with the police, before they arrested him.’

Authorities have said the man in custody was acting alone.

Eyewitness Mehmet Dilek said he first heard gunshots and then cries coming from inside a barber’s shop opposite the Ahmet-Kaya Kurdish Cultural Centre. Bystanders subdued the gunman as he had to reload his firearm.

Witnesses said they heard the gunman shouting: ‘I hate Kurds’.

‘It might be shocking for someone who has never had a worry in their life. But we grew up under the threat of arms and bombs, this is how life is for us Kurds,’ Mr Dilek said.