Cars were ignited by furious gangs of rioters in Paris today as thousands marched against a new law making it illegal to film the police.

Flames and thick black smoke filled major streets in the French capital on Saturday as youths wearing black masks and balaclavas threw missiles including Molotov Cocktails at the police.

By early evening there had been 22 arrests of ‘very violent suspects’ in the area around Avenue Gambetta, said a local police spokesman, who said highly organised rioters had put numerous shop windows in.

The new legislation would have created a new criminal offence for publishing images of police officers with intent to cause them harm but President Macron’s administration has since pledged to rewrite it following riots across the country.

Despite the rewrite concession, opponents have pledged to continue to protest until it is removed completely.

In a day of dramatic protests, cars were set alight in the street, filling the roads of Paris with plumes of thick black smoke. Pictured: A ‘yellow vest’ anti-government protestor kneels raising his fist holding a sign which reads: ‘Living, Yes! Surviving, No!’ 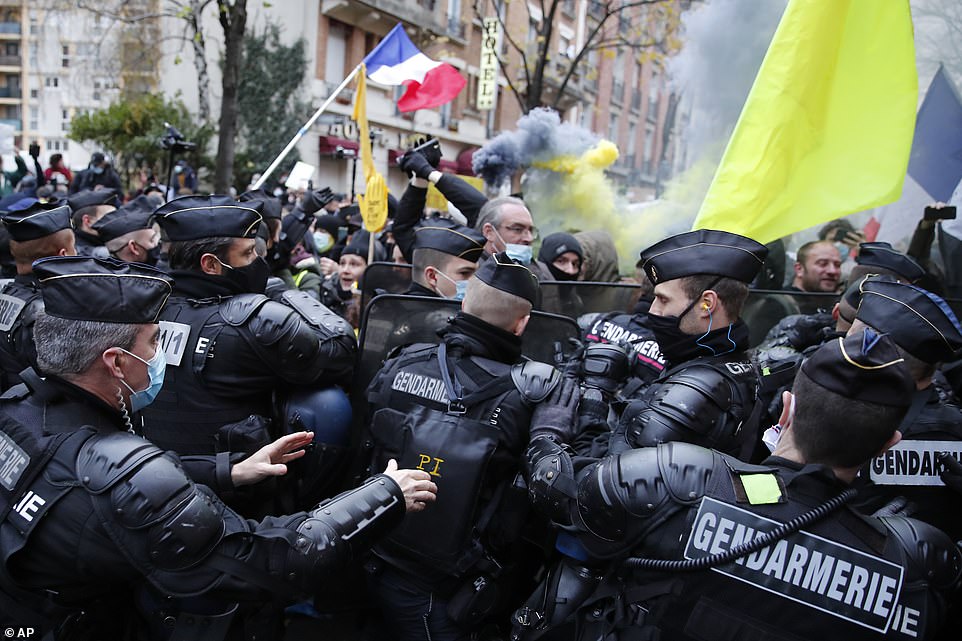 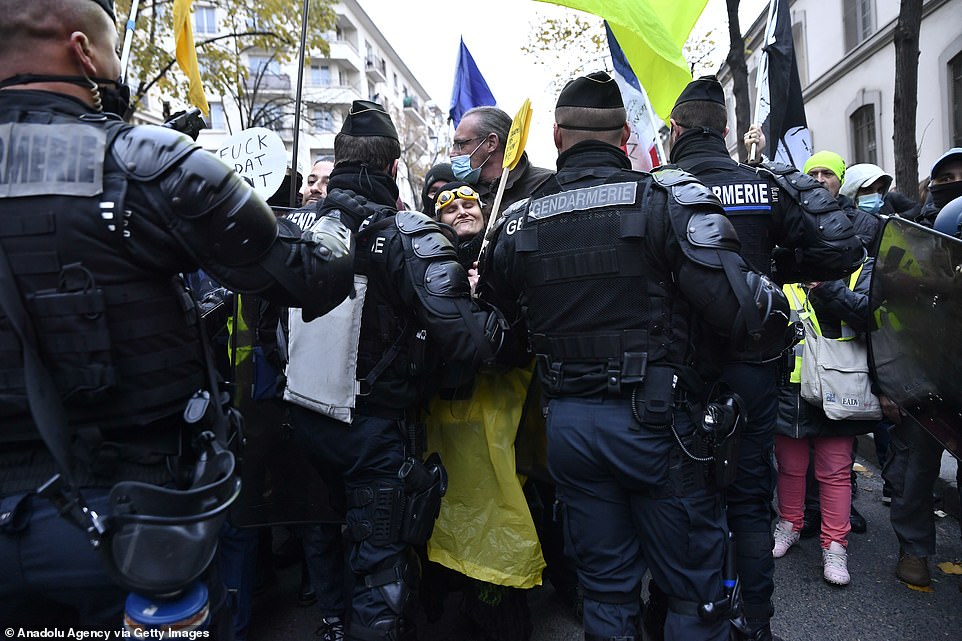 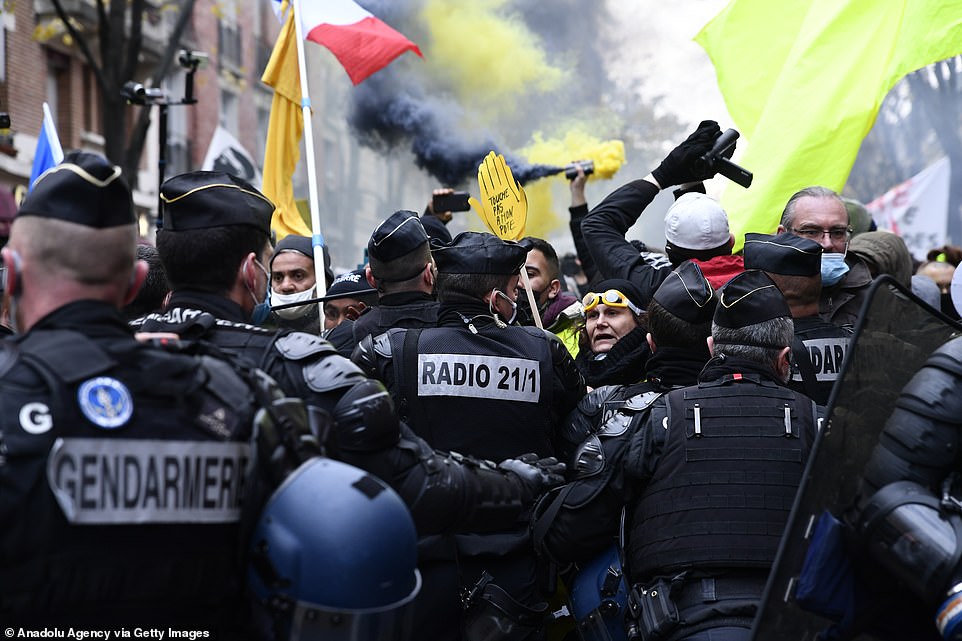 Reports suggest some members of the protest were throwing missiles at the riot police in Paris, including Molotov Cocktails 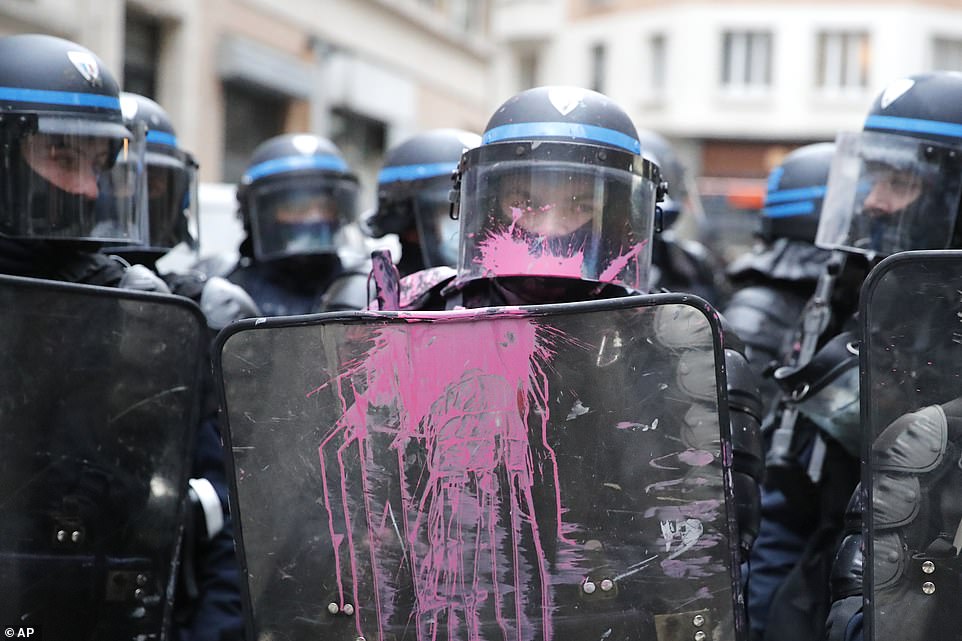 During the struggle between officers and demonstrators in Paris, the police were pelted with pink paint as well as claims of other missiles being launched at them 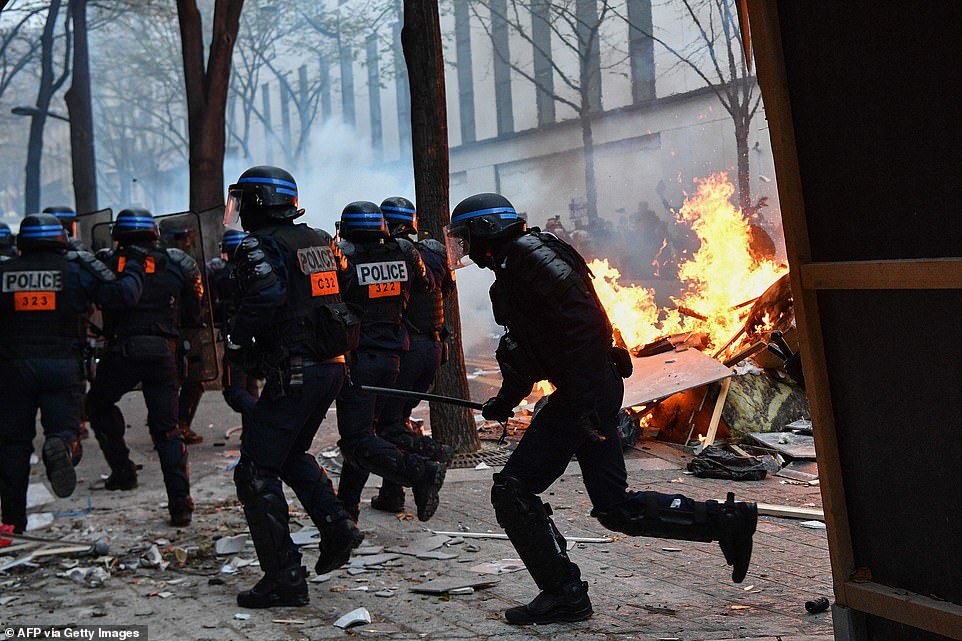 Protestors took the streets in Paris again today, after weeks of demonstrations, to campaign against the French government’s proposed ‘General Security’ bill,  forcing the police to intervene 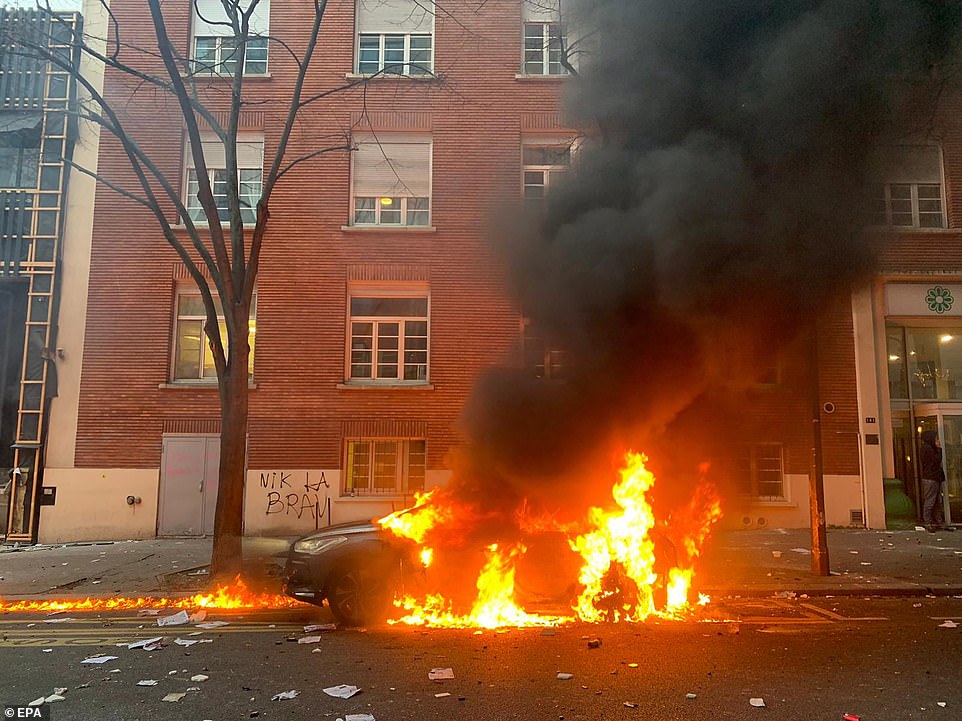 Across the city fires broke out, including this car which has been set alight as part of the growing tensions between protestors and police in Paris

‘They were part of a march heading towards Place de la Republique,’ said the source.

‘Vehicles and property are being set alight and officers are coming under attack. The situation is very tense.

‘There are hundreds of Black Bloc anarchists in the crowd and they are starting the fires, and smashing windows.’

As the violence intensified, officers responded with tear gas and baton charges, and water canons were also deployed. 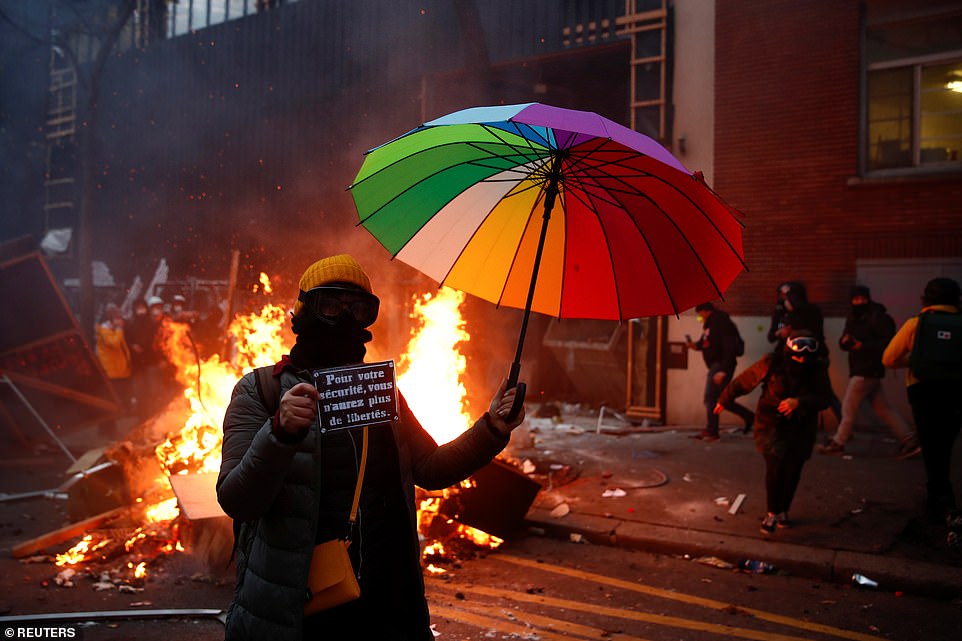 Local police confirmed that by early evening there had been 22 arrests of ‘very violent suspects’ in the area around Avenue Gambetta, Paris. Pictured: A demonstrator holds an umbrella and a sign reading ‘For your safety you will have no more freedoms’ during the protests 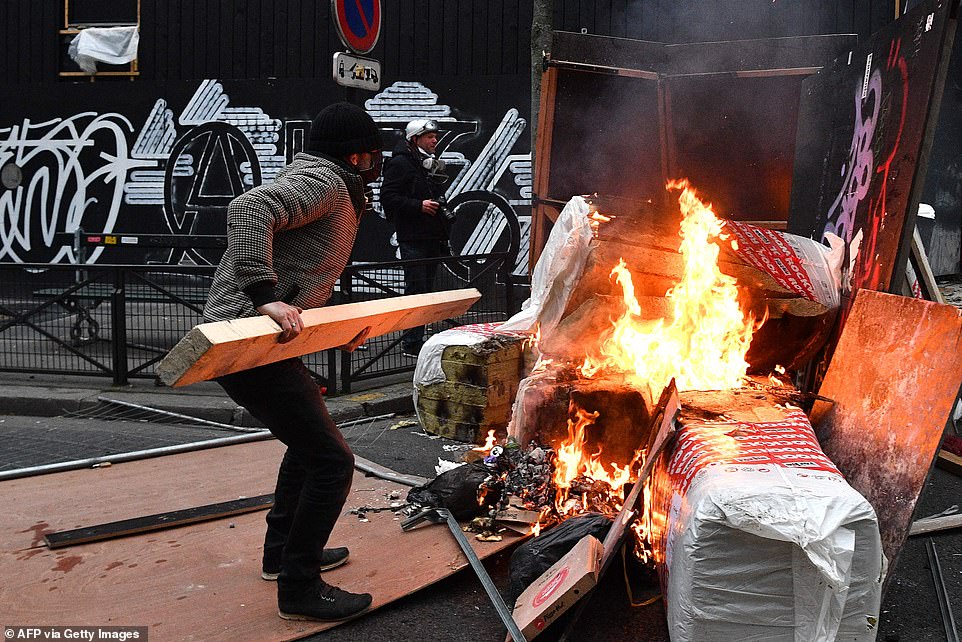 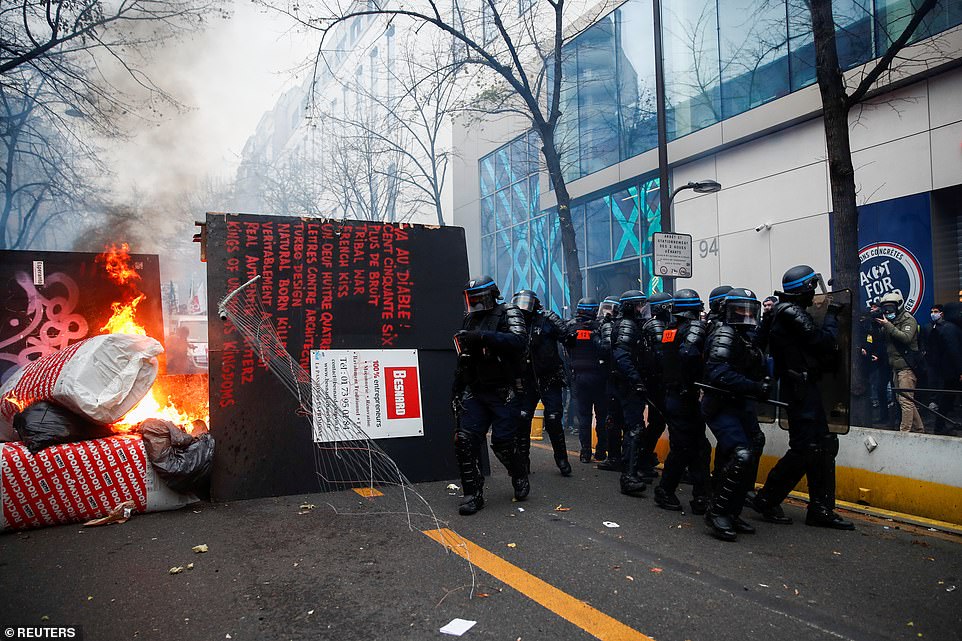 There were similar scenes a week ago in Paris when police came under continual attack around Place de Bastille.

French President Emmanuel Macron’s administration has pledged to rewrite a new Global Security bill which will make it illegal to publish any images of the police that might harm officers ‘physically or psychologically’. 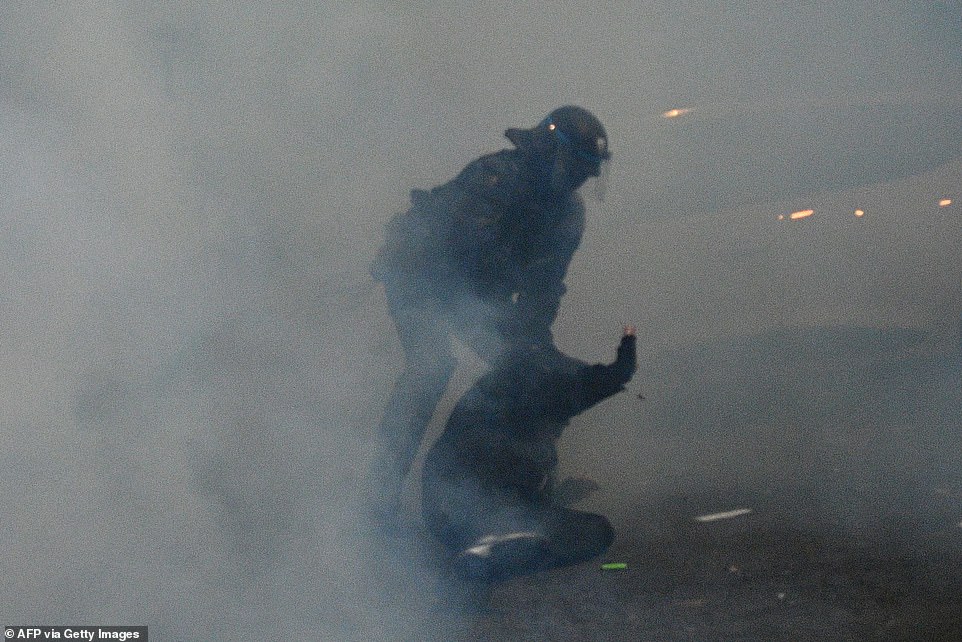 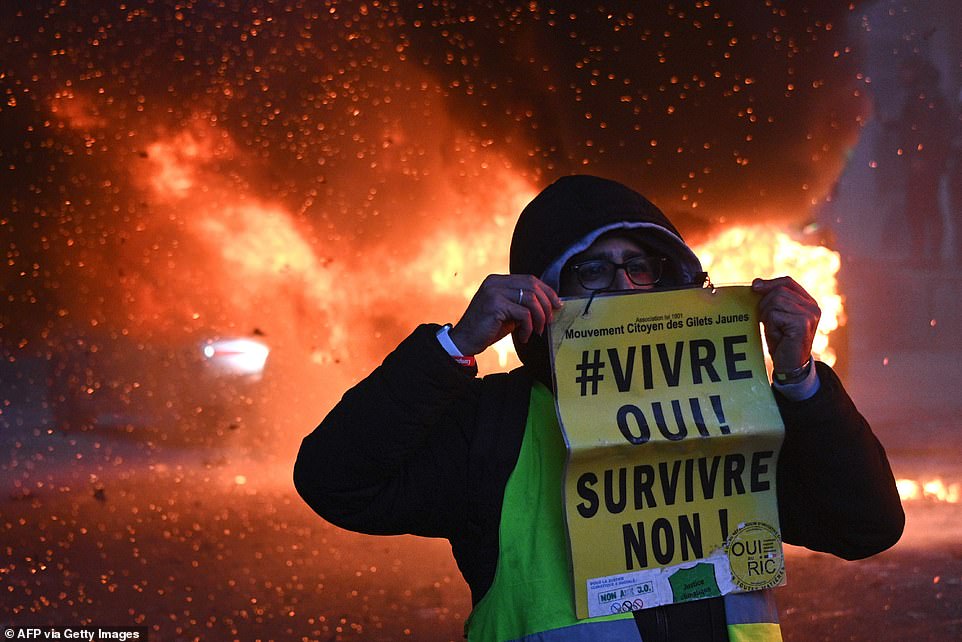 As the violence intensified, officers responded with tear gas and baton charges, and water canons were also deployed 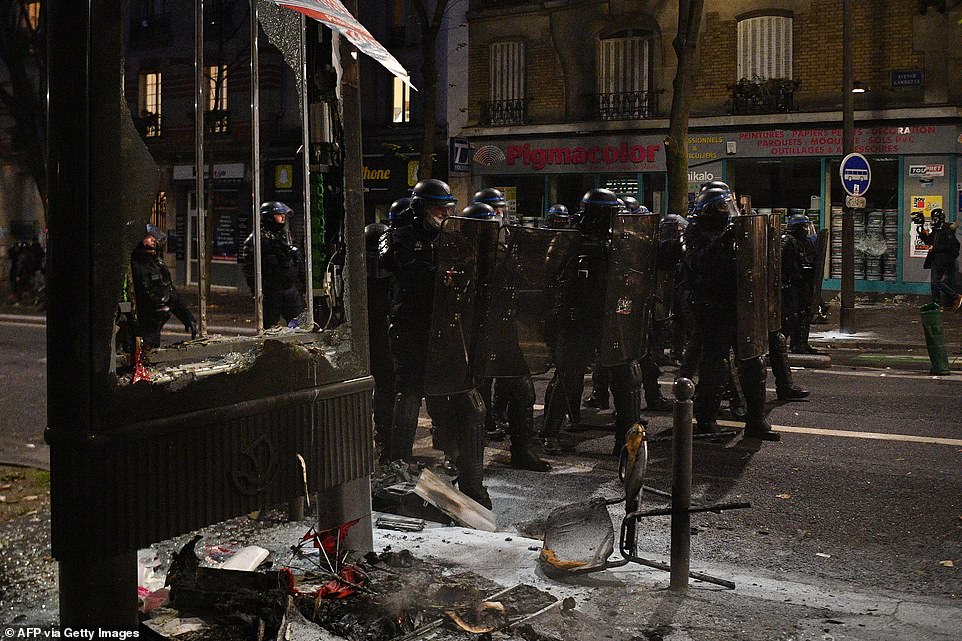 As well as shops and car windows, billboards were also destroyed by the protestors in Paris 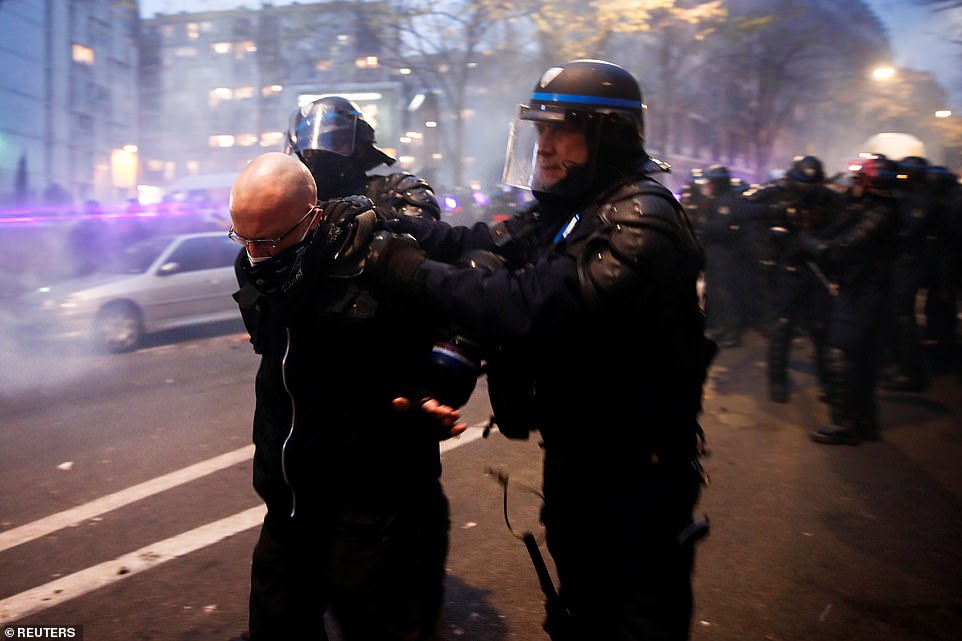 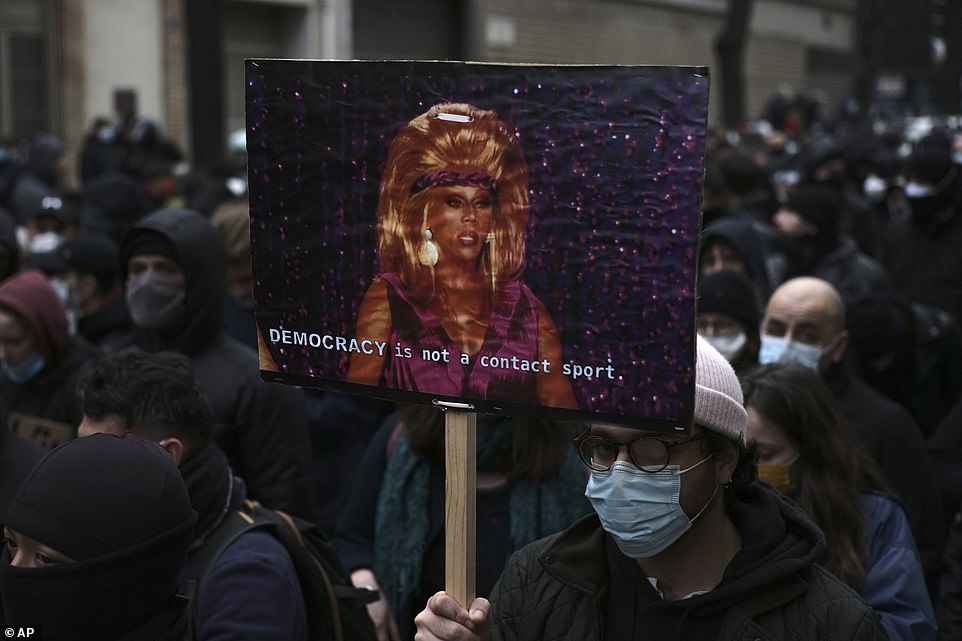 Thousands of people marched in Paris, holding placards and banners against the General Security bill 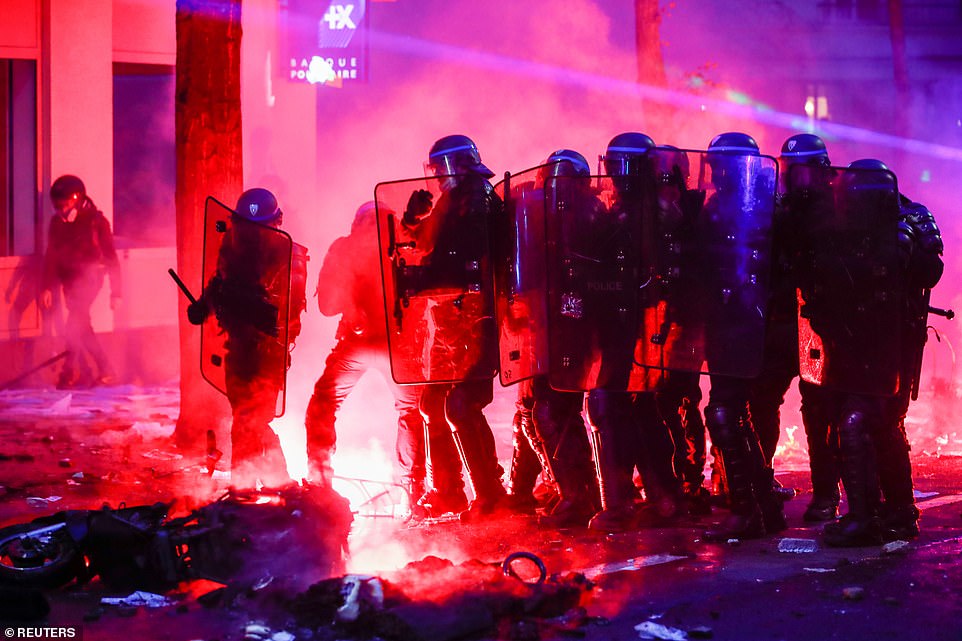 As the winter evening set in in Paris, the streets were filled with colour as fires and flares continue to burn in the city

Demonstrators have pointed to the fact that all the evidence against the police comes from CCTV footage, and film shot by passers-by outside Mr Zecler’s Black Gold studio in Paris.

Interior Minister Gérald Darmanin said he would press for the dismissal of all the officers involved, saying they had ‘soiled the uniform of the republic’.

Today, there were also demonstrations against the new law in some 89 other cities and towns beyond Paris. 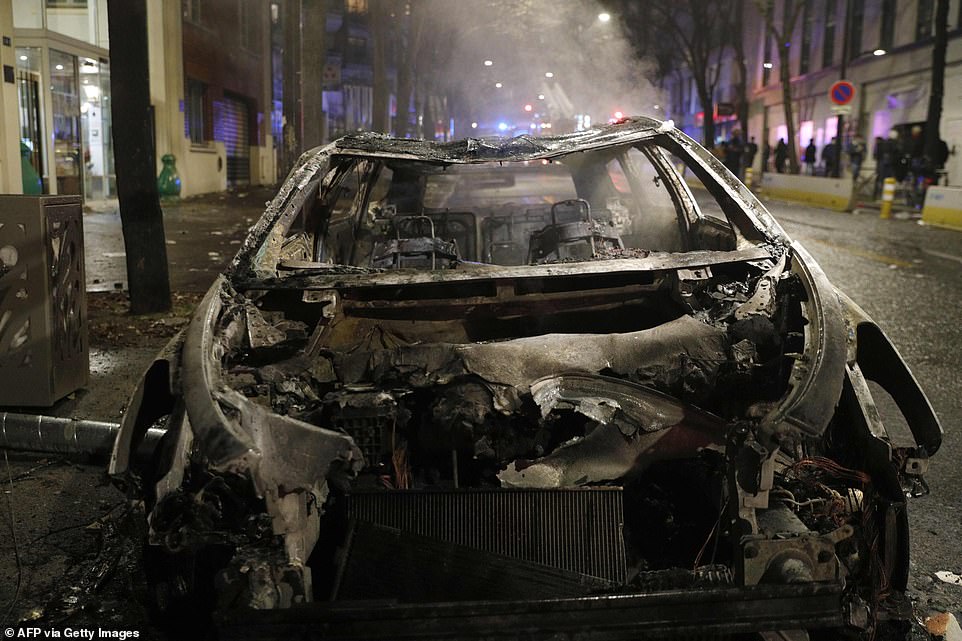 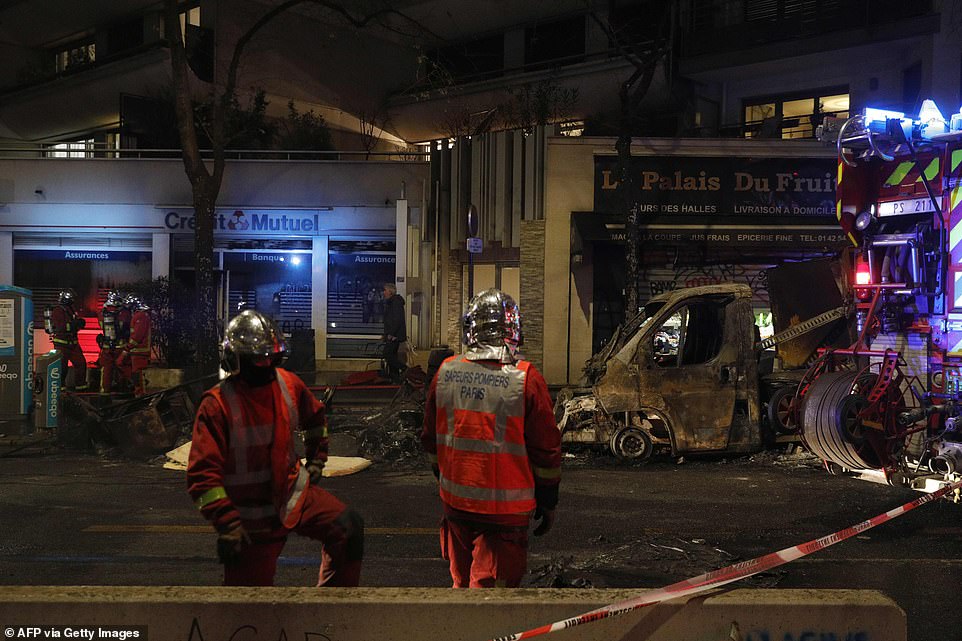 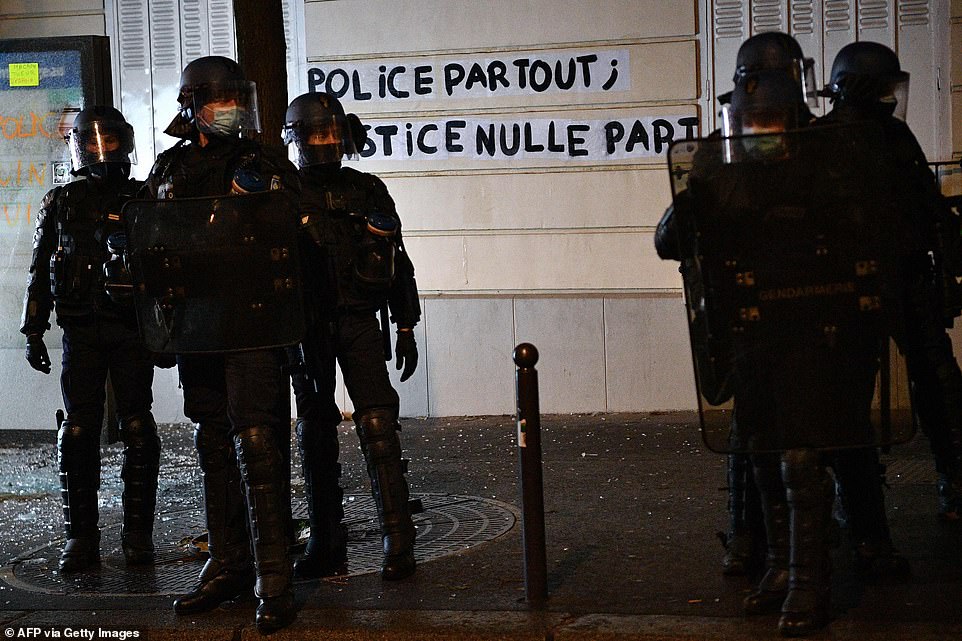 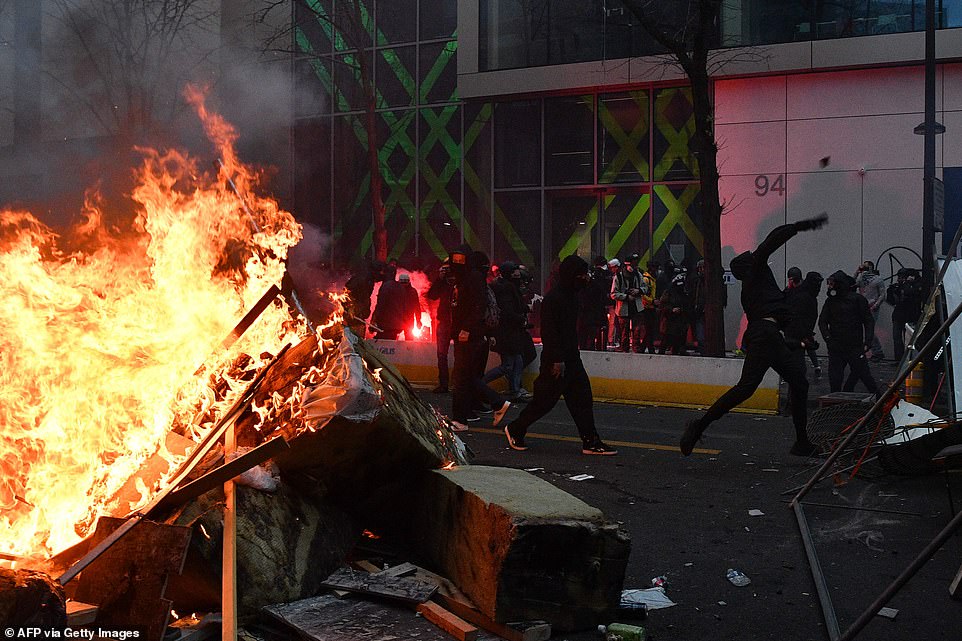 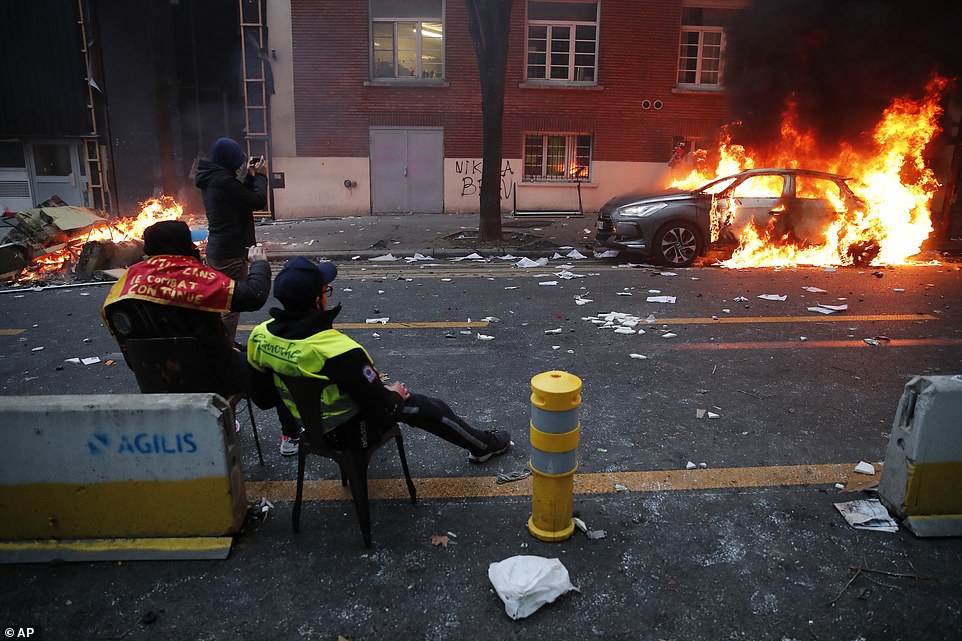 Most of France remains under coronavirus lockdown, but the forces of law and order today appeared relaxed about the large numbers turning up to demonstrate.

Protesters argue that recording officers in action is essential to being able to condemn and curb the actions of violent officers. They also worry how courts would determine whether images were posted with intent to harm.

In July, three French police officers were charged with manslaughter over the death of a delivery man, Cedric Chouviat, which bystanders caught on video.

Mr Chouviat’s death had similarities with the killing of George Floyd in the US state of Minneapolis, which sparked outrage around the world and a series of Black Lives Matter demonstrations in France.