Disturbing as it is to imagine, Wayne Swan had a sleepover with Kevin Rudd when they were in government. It happened one night towards the end of July 2008.

A series of meetings at the prime minister’s Sydney residence Kirribilli House to ponder the early tremors of the global financial crisis ended too late for Swan to get home. As they were appearing together in Nambour the next day for the 90th anniversary celebrations of the local RSL where both their fathers had been involved, Swan had no choice but to bunk down harbour-side. 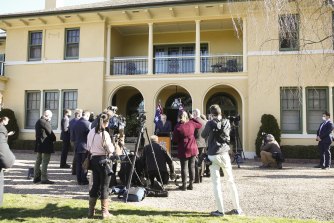 Prime Minister Scott Morrison holding a media conference outside The Lodge in Canberra, where he is currently hosting Treasurer Josh Frydenberg.Credit:Alex Ellinghausen

The relationship was rocky even then. Still, they got on well enough for Rudd to give Swan some clean undies for the next day. It broke down completely less than two years later when Julia Gillard toppled Rudd and Swan became her deputy.

That is how prime ministers usually finish up with their treasurers. They begin well enough, then jealousy, ambition or policy differences trigger irreconcilable differences.

So, it was a jaw-dropping moment for politicians on both sides of the political aisle when they heard that Treasurer Josh Frydenberg had willingly moved into The Lodge with Prime Minister Scott Morrison. 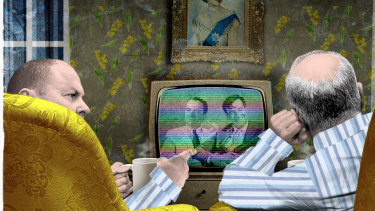 When you ask people in government ranks to name Morrison’s friends, they say Stuart Robert. Or Brother Stuie as Morrison calls him. Robert prayed with then Treasurer Morrison in his office immediately before he was elected leader on August 24, 2018.

Occasionally they say Ben Morton, who has also had sleepovers at The Lodge, and who, along with Robert, helped mastermind Morrison’s ascension to the leadership.

They never say Frydenberg. He and Morrison work closely together, but no one ever said they were besties. Mutual support, loneliness, convenience or a dose of good old-fashioned paranoia appears to have brought the two closer together. Like misery, especially in politics, paranoia loves company.

The object of that paranoia is of course the Defence Minister, Peter Dutton.

In political parlour game parlance, if Morrison had fallen under a bus months ago, Frydenberg was the clear successor. He began to relax, confident he had seen off the competition. 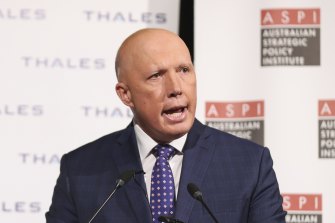 Christian Porter, once touted as prime ministerial material, had been taken out, his career wrecked. Occasionally absurd fantasies circulated about Peta Credlin entering federal Parliament to become leader. Frydenberg assiduously encouraged a different, equally absurd fantasy – that Credlin would do better in state politics where she could become Victorian premier.

Frydenberg prides himself on never appearing to be at odds with Morrison. He thinks it a virtue that he has never criticised Morrison either as deputy or as treasurer. Not so fellow cabinet ministers and backbenchers whose frustration with Frydenberg has grown in proportion to their disillusionment with Morrison. Several of them who voted for Morrison have since privately regretted not voting for Dutton.

Frydenberg is charming, but strange as it sounds to outsiders, so is Dutton, and Dutton’s performance over many years has won him a loyal, solid following in conservative ranks.

When this columnist reported elsewhere that restless government MPs hoped Dutton would surface as the standard-bearer for conservative causes which they believe have been betrayed by the government, it sent Frydenberg into over-drive. Now, even progressives believe Dutton would be more proactive on climate change than Morrison because he wants the issue “off the table”. 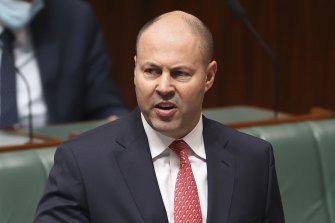 Frydenberg prides himself on never having been at odds with the Prime Minister. Credit:Alex Ellinghausen

Dutton has lifted Defence into greater prominence and according to cabinet colleagues offers alternative views in cabinet and on the expenditure review committee, where the razors have been confiscated and replaced by TV remotes and La-Z-Boy recliners.

Frydenberg would be even more agitated to know that several Victorian MPs, once terrified of getting wiped out under Dutton, who you would think would relish the opportunity to elect a Victorian as leader, give a swift “no” or “nah” to questions about Frydenberg’s potential as a leader.

They want him to be less submissive to Morrison. They want him to speak out more, at least privately, because they know, and history shows, creative tension between the prime minister and the treasurer is vital for better government and better policy, even at the cost of the relationship.

If – still a big if – Morrison loses the election, Liberals will want a leader able to hold the party together as it goes through its pending, inevitable existential crisis.

Better than expected growth figures provided a welcome reprieve, however Liberals fear longer-term damage to their brand as the better economic managers from the massive accumulation of debt and deficit and to claims of competence if Labor pins quarantine and vaccination failures on Morrison.

If Morrison wins, the Liberals’ identity crisis will deepen.

For three years the Liberals have lacked a coherent policy agenda and commitment to any cause beyond surviving the news cycle. As one senior Liberal observed: “Morrison doesn’t want anybody with a robust reform agenda. He doesn’t have one, and he doesn’t want anyone beside him to have one. Morrison is a ruthless campaigner. Josh needs everybody to like him.

“There is no clash of ideas or reform path. Josh is about managing expectations, managing relationships and managing stakeholders. So yes, they would be very comfortable living together.”

Frydenberg and Morrison are tied together by their apron strings now, but there is no knowing how or when it will end.

In 2018 Frydenberg welched on a deal with best friend Greg Hunt to run for the deputy leadership which he won handsomely. He can be a mongrel when advancement beckons.

In the first leadership ballot, enough of Morrison’s “God Squad” voted for Dutton to guarantee Malcolm Turnbull’s destruction. It didn’t stop Morrison throwing his arm around “my Prime Minister” Turnbull in front of cameras to deflect questions about his own ambition.

All that is worth remembering when picturing Frydenberg and Morrison in their ugg boots and trakky daks settling in to watch The Croods and Yes, Prime Minister, then working out their strategy to frame, blame or coerce the premiers. Then to think about what might follow if it falls apart.

Niki Savva is a regular columnist.