A newlywed mother-of-three and her husband, a convicted baby kidnapper, have admitted public order offences after becoming involved in a turf war with a convicted killer and his wife who lived next door.

Mother of three Vanessa Keeton, 32, hurled a carton of orange juice at the home of Paul Sharpe and called him a ‘f****** murderer’ after he had earlier branded her Michael a ‘paedo’ at a barbecue.

During a series of public shouting matches Michael, 35, also claimed Sharpe’s wife Vicky ‘put cigarettes out on babies’ whilst Vanessa further accused the Sharpes of hurling food over their adjoining fence into their garden.

Police who investigated the bizarre feud in Portwood, Stockport, Greater Manchester discovered Michael had been convicted of child abduction after he snatched a toddler from her home in 2014.

Details of Sharpe’s murder conviction were not disclosed. The Keetons have since moved 40 miles away to Burnley, Lancashire. 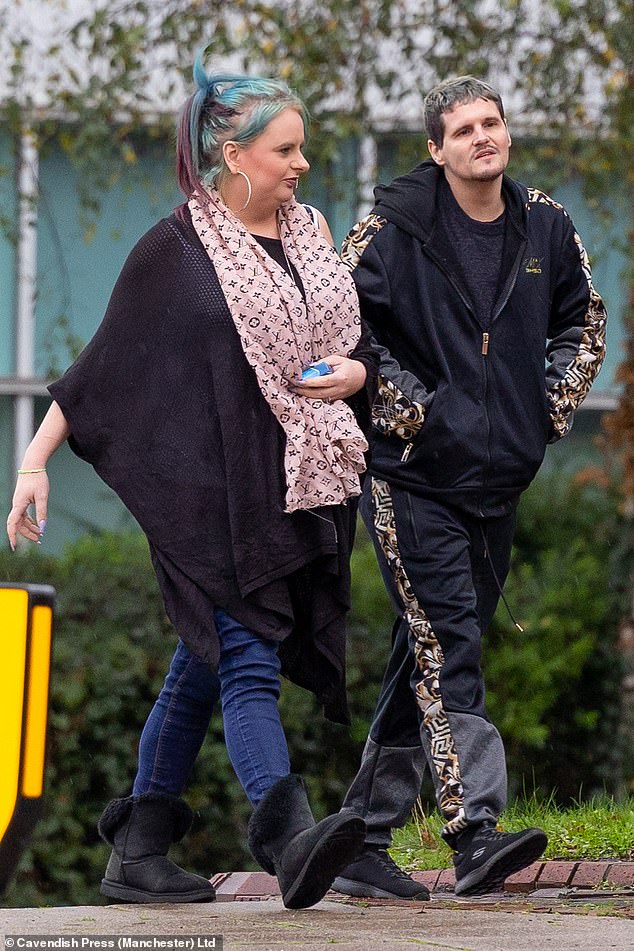 At Stockport magistrates court the pair who got married in July admitted threatening behaviour whilst Vanessa also pleaded guilty to criminal damage. Both were conditionally discharged for 12 months after a lawyer told the court that whilst the insults were ‘unpleasant’ they could be construed as ‘fair comment.’

The court heard the Keetons and Mrs Sharpe had originally been friends but they fell out when her husband moved in.

Nick Smart, prosecuting said: ‘In the early hours of May 25 this year, Vicky Sharpe was at her home address when she left the property briefly. When she came back to the property a short while after she noticed that liquids had been thrown at the premises, notably the house walls and windows.’

‘The next incident came on August 28 when both parties were out in the front gardens of their respective houses having a summer BBQ.

‘Both parties only live a couple of doors down from one another and an argument started between them, which was the result of their prior resentment. This argument quickly descended into a shouting match where both parties threw insults at each other and culminated with Vanessa calling Paul a ‘f****ng murderer. Michael then shouted ‘Vicky Sharpe puts cigarettes out on babies.’ 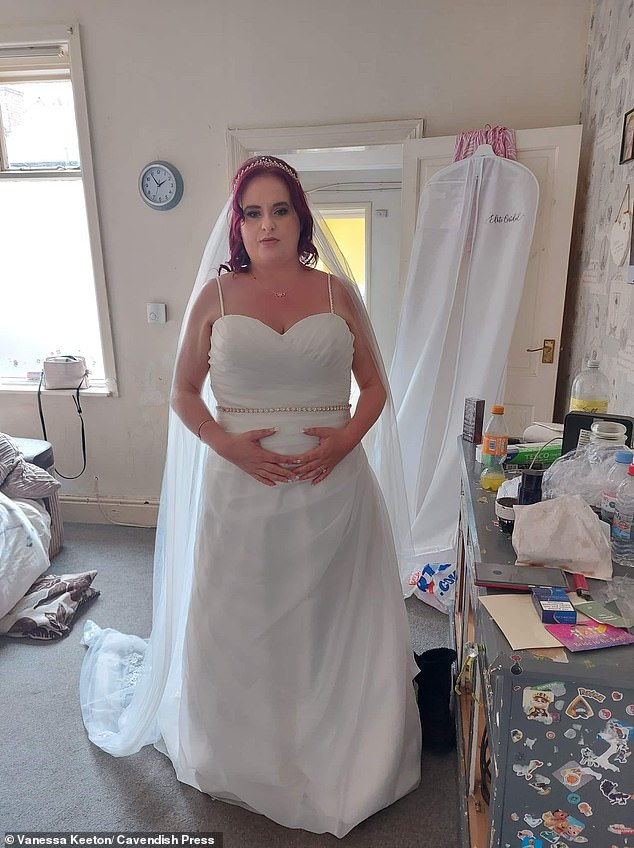 Vanessa in her wedding dress –  the couple were recently married

‘The Keetons were later arrested and questioned at Stockport police station. Later that evening, both parties were inside their properties. The complainant stepped out of the front door to have a look around as she thought she had seen something being thrown and heard noises coming from the street.

‘When she looked out she saw the defendants throwing items at their address from across the road. Every time the complainant told them to stop doing this they were laughed at and ignored.’

The court heard Michael Keeton was given a three year community order in 2016 after he crept into neighbourting house when he was living in Oldham and snatched the occupant’s 18 month old daughter from the lounge.

The distressed child was later found at his home but was found to be unharmed and was returmed to her mother.

Keeton later claimed to have heard the baby crying, and decided to take her to his own address for her own ‘protection.’ At the time a judge had planned to send Keeton to jail for three years but freed him as he had already served 16 months in custody.

In mitigation defence Simon Morton, said: ‘The Keetons say they have only done to Shares what the Sharpes have done to them. They have made complaints to the police who have not followed them up with investigations whilst the complainants have had their reports actioned.

‘The couple got on well with Mrs Sharple until Paul moved in to live with her. The relationship fell apart at the beginning of this year and the two parties began to argue. They claimed that the complainants threw food over their garden fence and that they just threw the cordial as a response. It is just childlike behaviour.’

‘As regards the August 28 incident, the complainant called Michael a ‘paedo’, referring to a previous conviction relating to a misjudged child kidnap in 2016. They only responded with their own insults. Although the insults were unpleasant, they were fair comment. Paul had spent an extended sentence in prison for murder.

‘They Keetons have now moved almost 50 miles away to Burnley in Lancashire and are out of harm’s way, so I don’t believe a restraining order will serve many no purpose in this case.’

The Keetons who are both on benefits were joined in court by Michael’s identical brother and two other family members. Michael himself was told to keep quiet after frequently disrupting the court during proceedings.

In sentencing, chairman of the bench Martin Drake said: ‘We have given much thought to this and have decided that a conditional discharge is the best course of action. There is no point pouring oil on troubled waters. We want you to draw a line under this event and move on.’

No restraining order was imposed between the parties. Vanessa was made to pay costs of £107 while Michael was told to pay £111.