MPs say a ‘war effort’ is needed to insulate Britain’s draughty homes as the country weans itself off fossil fuels, as they call on the government to set ambitious targets for wind and tidal energy

Britain needs a ‘war effort’ to insulate its draughty homes and wean itself off fossil fuels, according to a cross-party group of MPs.

The Environmental Audit Committee recommended a ‘national mobilisation’ in order to improve energy efficiency standards in homes across the UK.

It also called for all new homes to be fitted with solar panels to help Britain break its dependency on oil and gas, which have surged in cost since Russia invaded Ukraine.

In a report published today, MPs have called on the Government to set ambitious targets for rolling out onshore wind and tidal energy and recommended ministers set an end date for domestic oil and gas licensing in the North Sea. 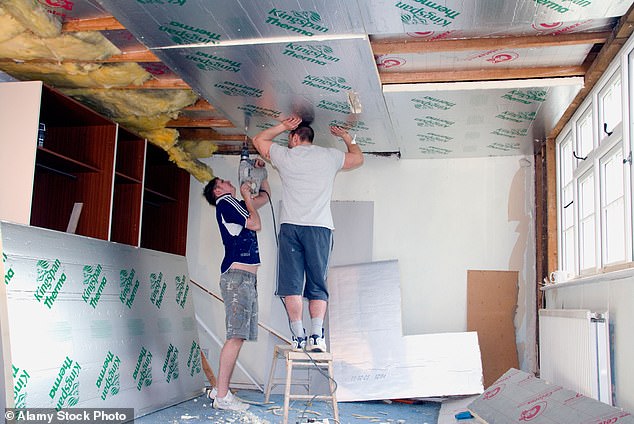 The Committee’s chairman and ex-Tory minister Philip Dunne MP said: ‘To reduce the UK’s demand on fossil fuels, we must stop consuming more than we need.

‘We must fix our leaky housing stock, which is a major contributor to greenhouse gas emissions, and wastes our constituents’ hard-earned cash: we must make homes warmer and retain heat for longer.

‘The Government’s welcome new Energy Efficiency Taskforce can lead a national mobilisation to install energy efficiency upgrades, which we would like to see achieve an initial target of a million homes a year and more than double this by the end of the decade.’

The committee recommended that money raised from the windfall tax on oil and gas profits should be directed towards this effort, with all homes rated at band D energy efficiency or below upgraded to band C.

‘We recommend that the Government launch a national ‘war effort’ push on energy saving and efficiency,’ the report added.

The MPs also urged ministers to include more ambition for tidal energy and onshore wind farms as part of the UK’s future energy mix when it publishes its revised net zero strategy, due before March 2023.

The committee also suggested housing developers should be required to fit solar panels on the roofs of new homes.