Home » ‘My ancestors are with us’: The Yorta Yorta’s fight to restore a pocket of country 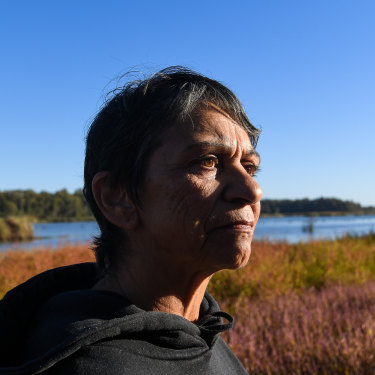 It’s a frigid April afternoon, and Yorta Yorta woman Monica Morgan is walking along the shores of the Barmah Lake, emotions running deep. She’s pointing towards an Indigenous massacre site where 26 of her ancestors were brutally killed by colonial troopers, when an ancient river red gum sounds out an alarming creak as a wind squall catches it branches.

“My ancestors are with us,” Morgan says at the sound. “They’d be proud we’re still fighting but also lamenting how many of our people we have lost along the way by those massacres, the removal of children from their parents, the deaths in custody and all those things that are just piling on us.

“But I believe that tree was talking to us, and that’s the ancestors saying ‘good, keep going, keep fighting’.”

This time the Yorta Yorta people are fighting to restore the health of their heartland, the Barmah National Park on the NSW-Victoria border. They want to undo years of damage caused by logging, feral animals, noxious weeds, climate change and the artificial flow of water to and from the Murray River and return its forest to the pristine state their ancestors enjoyed. 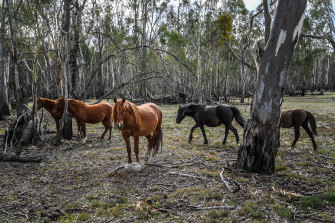 Parks Victoria plans to cull 100 brumbies every year for the next four years in the Barmah National Park. Credit:Justin McManus

There are no longer seasonal floods to drench the park and fuel its rejuvenation. Horse hoofprints have hardened parts of the ground, compacting the soil and preventing the growth of native flora. The reeds and rushes near the Barmah Lake, an internationally recognised wetland listed under the Ramsar Convention, are no longer growing in sync with the mating seasons of birds.

While there is consensus that the park is no longer as it was even 60 years ago, tensions in Barmah are at an all-time high over the plan to cull brumbies in pursuit of a healthier bush.

The brumby has long held mythical status in Australia, but as the population of the wild horses grew, so too did concerns about the ecological destruction they wreak.

“Of all the Yorta Yorta country, 2 per cent is not cleared, is not farmland,” Morgan says. “Only 2 per cent is country that we can restore and have the generations to come of all people, both Yorta Yorta and Australia, to share in, and see a glimpse of how country ought to be. That is what the vision, the hopes and the dreams of my Elders who stood under those gum trees are when they said ‘enough is enough, we must fight for our right’.”

In 2010, the Brumby Labor government entered into a Traditional Owner Land Management Agreement with the Yorta Yorta Nation Aboriginal Corporation with the aim of establishing a joint management plan to conserve the natural and cultural values of the Barmah National Park and manage threatened species. Following years of delays, Environment Minister Lily D’Ambrosio released the plan last year, paving the way for Parks Victoria, on behalf of the state government, to remove feral animals and noxious weeds that have degraded the land. 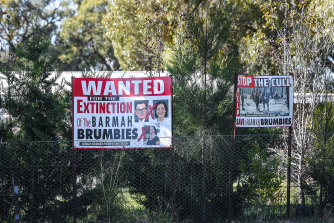 These signs have been placed around the town. Credit:Justin McManus

The debate has become highly charged over one contentious issue: the culling of brumbies. Parks Victoria has estimated there are 750 brumbies in the 20,000-hectare park, and announced that 100 of the wild horses will be removed every year for the next four years. Brumby advocates dispute the figure and say they believe there are 250 wild horses. That would mean the culling timeline amounts to eradication of the animals.

At the heart of this debate lies cultural heritage: is it possible to simultaneously protect a 160-year Anglo-Celtic history and the (at least) 65,000-year-old Aboriginal culture when the two clash?

We drove up to the border town ahead of this weekend’s annual Barmah muster, a camping event to celebrate the brumbies in the national park. There are billboards, put up by the Barmah Brumby Preservation Group, around town accusing Morgan of “slaughtering” the Barmah brumbies.

One sign has photos of horses, then a caption in black and white stating “this is the face that signed their”, followed by a photo of Morgan and the words “death warrant, Yorta Yorta”.

Another, which was removed shortly after, was hung on a tree, with some observers noting it had undertones of black people being lynched. Morgan’s address has also been published on public Facebook pages, urging people to turn up and protest against the killing of brumbies.

Morgan says the personal attacks remind her of the early ’80s when, during the fight to end logging, her mother Elizabeth Hoffman Morgan was viciously targeted for leading the charge to protect trees. Vandals dug shallow graves at a ceremonial site in the park and hung “Rest In Hell Elizabeth Hoffman” and Ku Klux Klan signs near it.

A rally will be held on Saturday morning to call for legislation to give brumbies heritage protection, similar to that in NSW – a reprieve not afforded to any other feral animal. For many advocates, the brumbies depict the last remnants of a lifestyle slowly stripped away from them. Logging and cattle grazing in the park has ended – why are horses in the firing line now, they argue.

Gerry and Kaye Moor, from Barmah, Renee Neubauer and Berny Thaggard set up Barmah Brumby Hay Angels after the 2018 drought, followed by flash flooding, that killed more than 100 brumbies and pushed many to the brink of starvation. 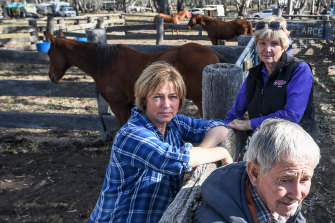 “These are the traditional horses that belong to the farmers of the time that built this country, and genetically these horses have evolved and adapted to what I think is a very harsh environment, and they have become such a strong genetic pool of survivors since the 1800s,” Neubauer says.

“The brumbies are important as a connection to past generations that have been out here, and historically speaking the horses were revered in this country as the animal that built this country. To see that dismissed would, I think, be very un-Australian.”

The group want Parks Victoria to examine the impact of the Murray-Darling Basin Plan on the health of the Murray River that runs through the park and undertake a proper assessment of the actual number of brumbies before embarking on the cull, which they believe is not necessary. They say the current plan is inhumane and does not achieve a holistic solution to a multi-faceted problem.

“Re-homers will only have a window of 24 hours to come and collect wild horses out of a trap … but if that re-homer cannot get here within 24 hours, all those brumbies are going to be shot. That’s the cold hard reality of it,” Neubauer says. 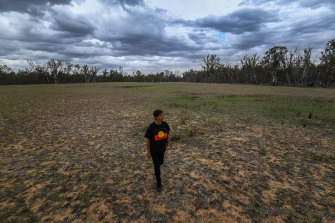 ”We are just really worried that they’re just picking on one species and they think it’s going to fix all their problems, it’s not,” Neubauer says.

Morgan also wants Parks Victoria to act, and says they have been a laggard in implementing the plan. Every delay, she argues, will cause further degradation.

The Yorta Yorta community’s largest ceremonial site is located within the park and, along with many other cultural locations, has been fenced off to prevent feral animals as well as people trampling over sacred sites.

Without intervention, the highly significant moira grass, which has declined in extent by more than 80 per cent since the 1990s, will be extinct by 2026, according to the joint management plan.

Changes to the way water is allocated through the Murray-Darling Basin Plan are being canvassed. Noxious weeds, including the aquatic arrowhead, must be controlled and invasive native species such as as the giant rush and river red gum regrowth need to be removed, the plan states. The removal of feral horses has been identified as a “high priority that needs urgent action to deal with impacts”. 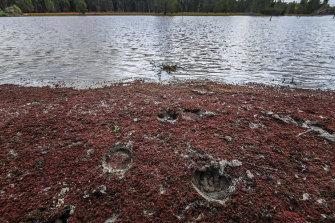 “We’re disappointed the Yorta Yorta community are being linked to the cull in a derogatory fashion, and Parks Victoria and the state government need to stand up and show that they are the people that need to just pull the Band-Aid and get on with it,” Morgan says.

”The land is degraded further and further because it’s not just horses, it’s all hoofed animals. It’s the goats, the pigs, the horses, the foxes, the deer – they’re all contributing equally in a massive way.

“Because of the announcement of the cull so close to the joint management plan, Parks Victoria has made us the fall guy. They made my people the targets because they’ve withdrawn themselves into the background.”

Julie Pridmore, from the Barmah Brumby Preservation Group, has denied there are racist undertones to the signs hung up around town, and says she was married to an Indigenous man for 35 years, who passed away seven years ago, and that her three adult children and her 10 grandchildren identify as Indigenous.

“What happened to the Indigenous people is disgraceful but we, as a community, cannot be paying for the things our fathers did,” she says. 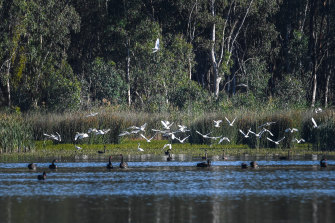 The artificial flow of water through the Murray River has affected the ecology of the Ramsar-listed Barmah Lake. Credit:Justin McManus

“We don’t ride horses recreationally – it’s part of who we are. I’ve been watching generations of horses for 45 years and now they tell me I can’t, they want to slaughter them and leave them on the ground.”

A Parks Victoria spokesman said it was working with the other agencies, including the Department of Environment, Land, Water and Planning, to manage water regimes for internationally recognised wetlands in Barmah.

He said the agency had asked the group behind the “offensive” signs to remove them.

“Parks Victoria is meeting its obligation to control invasive species in Victoria’s national parks, including feral horses. Over the last two years 503 deer, 57 pigs and 50 goats have been removed, and fox control programs have led to significant reductions in the fox population,” he said.

”Parks Victoria has undertaken three surveys of feral horses in the past five years, using a scientifically sound method. A further survey is planned for mid-year.” 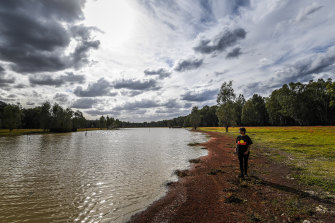 Monica Morgan, standing near Hutt Lake, dreams of a future where generations of Aboriginal and non-Aboriginal people can enjoy a pristine Barmah National Park. Credit:The Age

This land must be brought back to pristine conditions, Morgan says, because she owes it to her elders and her ancestors.

“Many of our people are feeling intimidated, cowed by this sense of white privilege that seems to permeate,” she says.

“Just because you came here 200 years ago, it does not mean that it diminishes or takes over the rights of people who have been here for over hundreds of thousands of years. In fact, it is an insult to the memory of those ancestor who fought to live, to die, to breathe and to be on country.”