Soldiers in North Korea are expected to stage an enormous military parade to celebrate the founding of the ruling Workers Party on Saturday while Korea watchers around the world are on the lookout for the “new strategic weapon” that Kim Jong Un had promised to unveil this year.

According to 38 North, a US-based think-tank, the VIP viewing stand at Pyongyang’s main square is now ready: the construction of the exterior of a flagship hospital appears to be complete, while satellite images captured earlier this week showed troops ostensibly continuing to practice for the parade. Thousands of people were also seen on satellite images in mid-September assembling in formation at Pyongyang’s main square, spelling out phrases such as “Heroic Youth” and “100 Battles, 100 Victories”.

The October 10 event marks the 75th anniversary of the founding of the Workers Party and is one of the most important holidays in the closed-off country. But despite the reported pomp and ceremony, analysts say North Koreans have little to celebrate this year, with the important anniversary falling in a year that the North Korean leader himself has described as one of “unprecedently grave trials and difficulties”.

The impoverished nation is besieged with crises: its economy, already buckling under the strain of tough international sanctions, took a further hit when North Korea decided to close the border with China, its main trading partner, in January, in a bid to prevent the spread of the coronavirus.

Adding to that is the devastation wrought by a northern summer of multiple typhoons and severe flooding that by official accounts has left thousands of homes damaged and raised fears of worsening food insecurity. 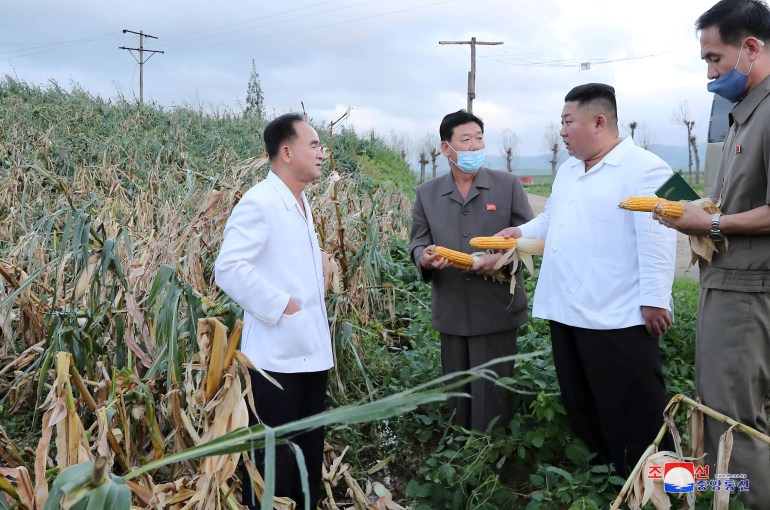 North Korean leader Kim Jong Un inspects the typhoon-damaged area in South Hwanghae Province, North Korea, in this image released by North Korea’s Korean Central News Agency (KCNA) on August 27, 2020 [KCNA via Reuters]“North Korea is dealing with a very complicated and fragile domestic situation,” said Sue Mi Terry, senior fellow for Korea at the US-based Center for Strategic and International Studies (CSIS). “That is why it’s doubly more important for it to show strength and defiance, domestically and internationally. They will not want to appear weak or vulnerable.”

She added: “And historically, they’ve used the occasions such as the Party Founding Day to showcase new weapons systems. For these reasons, we expect to see a new strategic weapon.”

What that weapon could be and whether North Korea might test launch it is now the subject of intense debate among international observers. Some, including experts at CSIS, say the weapon could be a Submarine Launched Ballistic Missile (SLBM) and suggested North Korea is likely to test the underwater weapon, pointing to satellite images showing a flurry of activity at the Sinpo South Shipyard, a place where it builds submarines.

The claim gained more traction last month, when Won In-choul, the chairman of South Korea’s Joint Chief of Staffs said North Korea has been repairing typhoon damage at the shipyard and said there was a chance it could carry out an SLBM test after the repairs are complete.

“We’re monitoring developments, as there is a possibility that a submarine-launched ballistic missile test will be conducted there using ejection equipment shortly after the repair is done,” Won told South Korean legislators.

‘We are still a threat’

Others, however, say an SLBM test is unlikely as North Korea had already tested such a weapon in 2016.

“A submarine armed with a few ballistic missiles is hardly a ‘new strategic weapon’,” wrote Markus Garlauskas and Bruce Perry, former US intelligence officers, in a blog post for the Atlantic Council, a US think-tank, on October 1. Instead, “the most important type of truly ‘new strategic weapon’ for North Korea would likely be a large road-mobile ballistic missile with the ability to deliver multiple re-entry vehicles,” they wrote.

A long-range weapon with multiple warheads “would make it much more complicated and possibly impractical, for the US military to intercept a North Korean missile attack on the continental United States,” they added.

There is also speculation that North Korea may unveil more advanced weapons, including Intercontinental Ballistic Missiles (ICBM) or a solid-fuel ICBM, which is thought to be easier to store and faster to deploy than liquid-fuelled systems. But such systems, if showcased, are more likely to be “mock-ups” than weapons that are ready for testing, analysts said, adding that observers should also expect North Korea to parade its growing arsenal of missiles, including many more medium-range weapons as well as weapons launchers.

“The message is very clear,” said Adrian Foster-Carter, a Korea expert with Leeds University in the United Kingdom.

While North Korea is expected to exhibit new weapons systems, US defence officials and analysts, including Carter, say Pyongyang is unlikely to conduct any nuclear or missile tests that might provoke US President Donald Trump ahead of his re-election bid on November 3.

Kim announced a halt to nuclear and missile tests and has not shown his largest missiles at North Korean military parades since beginning historic denuclearisation talks with Trump in 2018. The pair met in person three times, but talks stalled in 2019 after Trump rejected Kim’s demand for substantial sanctions relief in exchange for a partial surrender of its nuclear capabilities.

Now, with talks at a deadlock, Lee Sung-yoon, professor of Korean Studies at the Fletcher University in Boston, US, said Kim may again look to resume missile tests.

“With an ICBM test, Kim can reset the table in his favour and increase his net international value – which is measured entirely in threat capability and concomitant possibility of diplomacy – vis-a-vis both Trump and Biden,” Lee wrote in an email, referring to Trump’s Democratic challenger, Joe Biden.

“Neither will turn his back on Kim when he re-engages the US at a time of his choosing in 2021 or beyond. Hence, I expect North Korea to do more than just showcase hardware.”

4.2 million people tuned into the premiere of “The Way I See It,” propelling MSNBC above Fox News and CNN

4.2 million people tuned into the premiere of “The Way I See It,” propelling MSNBC above Fox News and CNN