The soured relationship between former Cleveland Browns wideout Odell Beckham Jr. and current (but maybe not for long?) quarterback Baker Mayfield wasn’t lost on their teammates this past season.

Even before the events which eventually led to the subsequent release of Beckham this past November, players in the Cleveland locker room witnessed an uncomfortableness surrounding the star receiver and quarterback.

Linebacker Jeremiah Owusu-Koramoah and cornerback Greg Newsome II admitted on the Varsity House podcast this week that Beckham and Mayfield’s poor relationship was “distracting” and “the whole thing was just off.”

Was the OBJ-Baker saga overblown? JOK and Greg Newsome give their thoughts on @varsityhousepod w/ hosts @ShaunCrawf20 & @Jones11_
Subscribe to channel for updates! pic.twitter.com/G77kcaI5gW

Individually, though, Owusu-Koramoah and Newsome had nothing but positive things to say about Beckham and Mayfield. Both called Beckham one of their favorite teammates who didn’t haze rookies, helped young players learn their positions better and gave a lot of gifts throughout the season.

“Odell has got to be one of the best teammates I’ve ever had,” Owusu-Koramoah said.

“The crazy thing, Baker was a great teammate, too,” Newsome added.

Newsome went on to say that Mayfield took him and other players out to dinner a lot as well to connect. 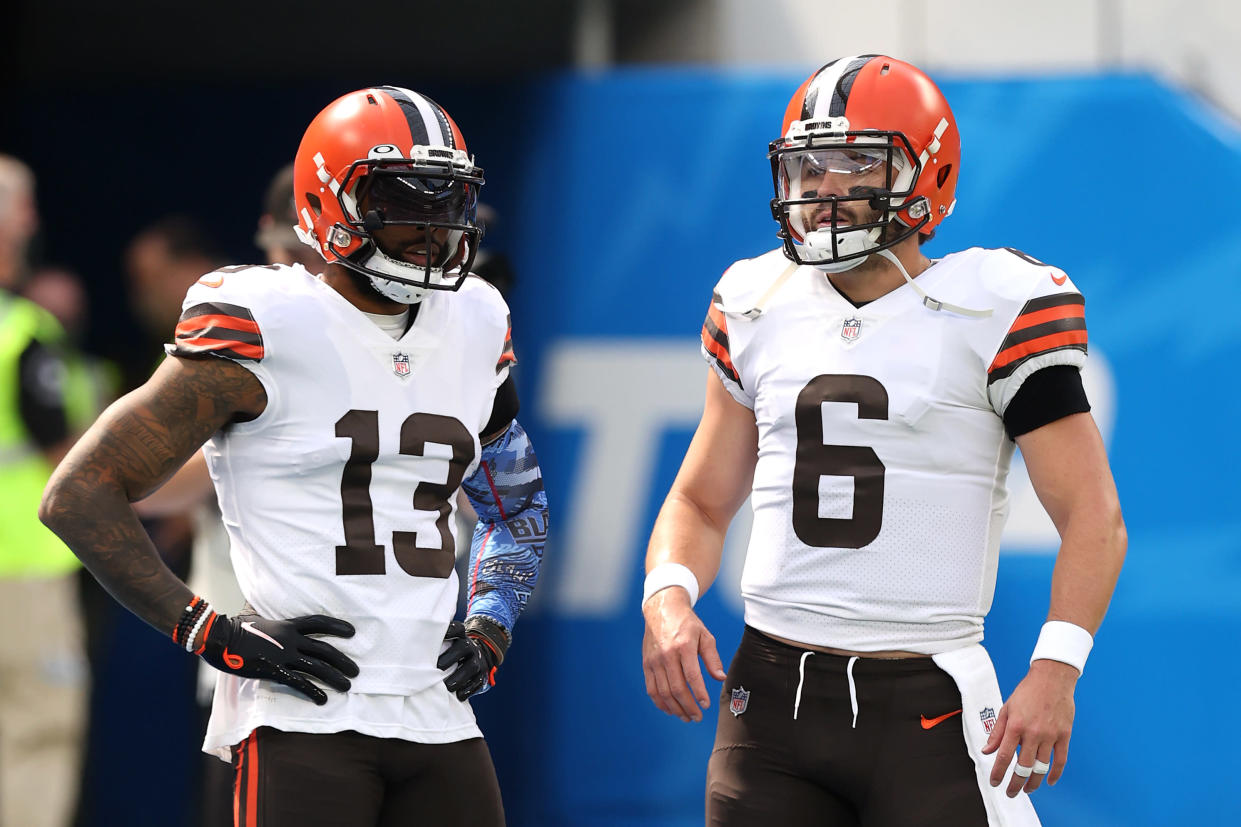 What happened with Beckham and Mayfield?

The relationship between Beckham and Mayfield began deteriorating much earlier than the Nov. 2 Instagram post by Beckham’s father. Yahoo Sports’ Charles Robinson reported in late 2019 that Beckham felt “lost” on the Browns, according to a source, and he was actively looking to be traded to another team after telling opposing players and coaches to “come get me.”

A lot of that had to with Mayfield’s inability to connect with Beckham on the field. The Instagram post highlighted this, but a 2021 ESPN report from Jake Trotter documented that the beginning of the rift between the two began as early as Beckham’s first training camp in Cleveland following his blockbuster trade from the New York Giants and continued throughout his entire Browns tenure.

It boiled over this past season when Beckham’s target share dropped below six per game for the first time in his career. His targets actually fell every year since he joined the Browns after averaging more than 10 targets per game during his first five years with the Giants.

Then the Instagram post dropped in November, followed by a #FreeOBJ tweet from LeBron James. The Browns soon agreed to mutually part ways with Beckham, who signed with the Los Angeles Rams soon after and went on to win Super Bowl LVI.

Uncertain futures for Beckham and Mayfield

Coincidentally, neither Beckham nor Mayfield knows what their NFL futures hold. Beckham is still a free agent after tearing his ACL in the Super Bowl and Mayfield appears to be done in Cleveland after the Browns traded for Deshaun Watson.

The Rams have said they’d welcome Beckham back, but his injury complicates things. As for Mayfield, multiple teams appear interested in acquiring the former 2018 No. 1 overall pick, but likely not with his fully-guaranteed $18.85 million contract in 2022.

It’s anyone’s guess where either of the two former teammates will end up this year.