KIEV (Reuters) – A comedian and entrepreneur, 29-year-old Roman Hryshchuk had only been in politics for a few weeks when he found himself in front of a semicircle of voters in a park in western Kiev, fielding questions from a testy audience. 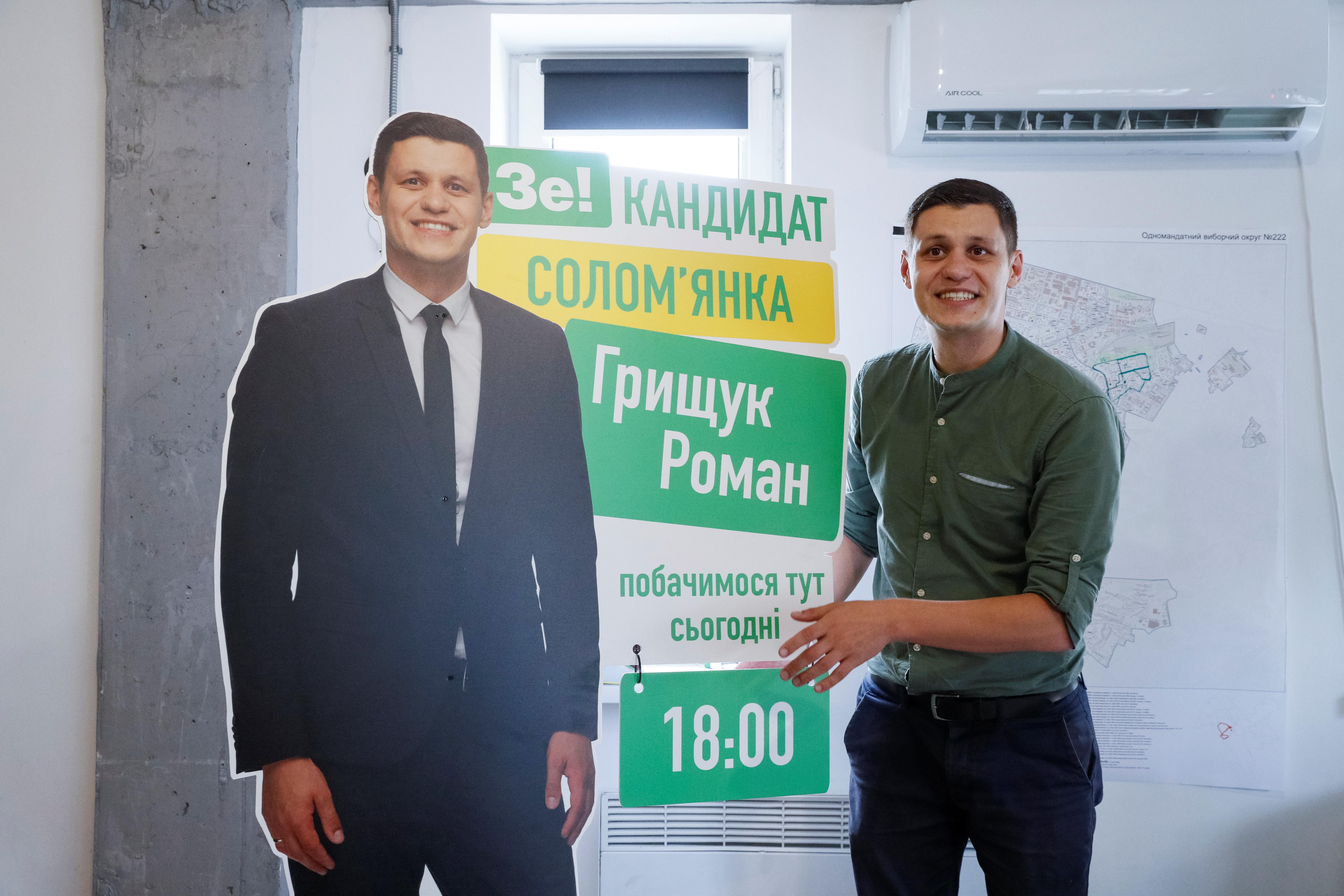 One woman in a pink hoodie repeatedly asked whether he would sell his television production business if he became a lawmaker, and then asked where his campaign office was so she could visit him.

Another voter heckled that Ukraine’s president didn’t appear to know what the capital of Canada was, after his team mistakenly said it was Toronto in a statement. At one point, a tipsy man loudly waded into the meeting and was escorted away.

As a student, Hryshchuk worked as a stagehand on the comedy shows of the man who went on to become Ukraine’s president, Volodymyr Zelenskiy.

Now he is following his showbiz role model into politics because Zelenskiy, vowing to scrub Ukraine’s parliament clean of corruption and nepotism, invited members of the public to run on his party’s ticket at a parliamentary election on July 21.

Zelenskiy caused a political earthquake with his landslide victory in the presidential election in April. He appealed to voters as an everyman outsider, making a virtue out of his lack of political experience, and struck a chord with Ukrainians fed up with how their country has been run since independence in 1991.

Ukraine has some of the worst poverty levels in Europe and Hryshchuk said Ukrainians had reached “boiling point” where they want to vote in anyone but the old politicians.

“And this is normal, because, once again, when people have been given promises for 27 years and nothing was done … they are ready to project onto any person who comes to them and says, ‘I want power’, all that is bad in their lives, and they dump it on this person.”

Zelenskiy’s Servant of the People party, named after a TV comedy series where he played a fictional president, is on course to win most seats in the parliamentary election, according to surveys of voter intentions.

At stake is the chance to form the government of a country on the frontline of the West’s standoff with Russia following Moscow’s annexation of Crimea in 2014 and its role in a conflict in eastern Ukraine that has killed 13,000 people.

Zelenskiy currently shares power with a government and parliament dominated by people loyal to his predecessor.

If he wins control of parliament, he has pledged to implement anti-corruption measures such as stripping lawmakers of immunity from prosecution and pro-business policies like lifting a moratorium on the sale of farmland.

He has also promised to find a peaceful solution to the eastern conflict and offered to meet Russian President Vladimir Putin for talks.

His team hopes to reprise that unorthodox campaign success and bringing people like Hryshchuk on board is an example. Hryshchuk was one of around 3,500 people who applied to run for Zelenskiy’s party through a specially created website.

“Previously – especially for young people – guys understood that everything was decided for them and in many respects this was true,” said the head of Zelenskiy’s party, Dmytro Razumkov.

With Zelenskiy’s candidacy, “a completely different category of our fellow citizens appeared, who believed that they too could influence this process,” he told Reuters.

“And today, many of them are standing next to us, and I hope that they will be represented in parliament.”

To be sure, Zelenskiy has faced scrutiny about some of his appointments and his business connections to Ihor Kolomoisky, a powerful tycoon whose TV channel 1+1 was a platform for Zelenskiy’s presidential campaign.

Nevertheless, no current or former lawmakers were allowed to run for Zelenskiy’s party.

After applying, Hryshchuk was interviewed about his background, family, political views and ambitions, before being given training at Zelenskiy’s headquarters on how to campaign.

“Before it was announced that I would be a candidate, I decided with my friends: ‘Roman, let’s go to Google, and look at the search history that comes up when we Google your name, because it will never be so beautiful and clean,’” Hryshchuk said.

“So, I have something to lose.”

Hryshchuk is contesting a constituency with a large student population in the Solomianskyi district of Kiev. Voters can set up meetings with him through messenger apps like Viber.

He holds public meetings three times a day, and uses Facebook to target specific groups to encourage them to attend. Via his campaign website, Facebook users can download a frame they can put on their profile picture to show support.

The election takes place in summer when classes at the university have finished. To try and get students to stick around and vote, Hryshchuk said he planned an initiative called SolomaCouchserf where residents offer students to stay overnight in their apartments on election day so they can go to the polls.

Millions of Ukrainians, including university graduates, have moved abroad in search of better paid jobs. After a sharp devaluation of the hryvnia currency, in dollar terms, Ukrainians earn $50 less per month than they did before the annexation of Crimea in 2014. The average salary is less than $400 a month and the average pension is around $115. 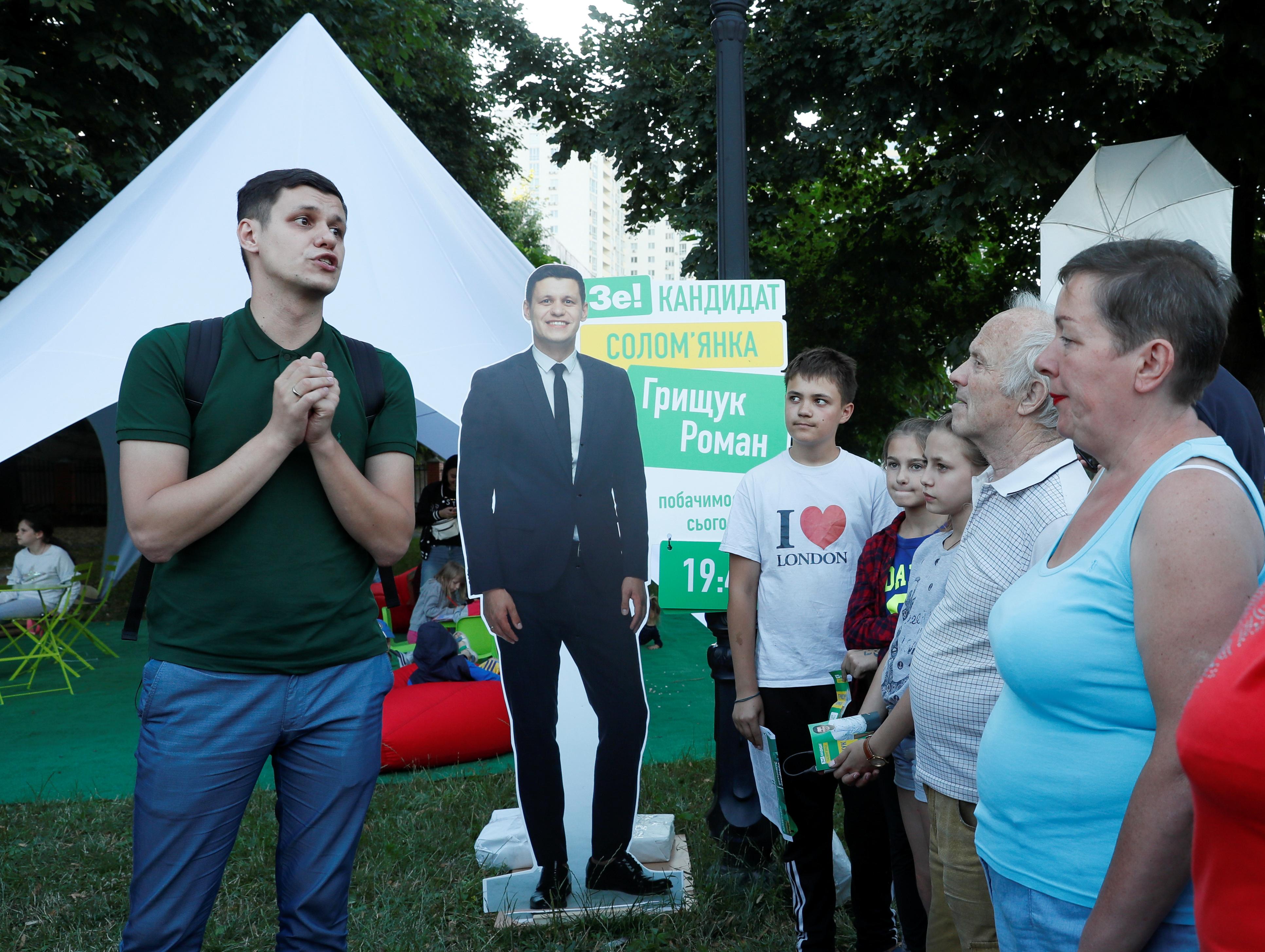 “The first time you return from Europe, you want to cry,” Hryshchuk told Reuters.

“Recently, my wife and I went on a cruise and saw pensioners from all over Europe on holiday. And then I meet with a Ukrainian grandmother who came to a meeting, and after the meeting said: ‘I’ll go collect some bottles to buy bread.’”