The COVID-19 economic downturn has put an end to above-inflation price rises at the state's most expensive non-government schools.

An analysis by The Age of 48 of the state's highest-fee schools – including Geelong Grammar, The King David School and Scotch College – shows they have largely frozen their fees for 2021. 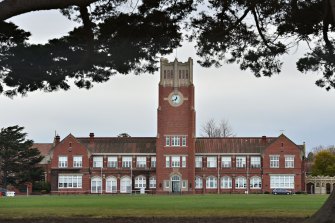 Some, such as Carey Baptist Grammar, have even reduced their fees. Only a handful, including Xavier College, have increased them.

But a move by some schools to also freeze teacher salaries has been criticised as unfair.

The pandemic has put a temporary halt to consistently high fee rises of roughly 5 per cent a year by in-demand Victorian independent schools, with fees for 2021 rising just 0.33 per cent, or $123, on average.

Thirty-four of Victoria's 48 highest-fee schools have frozen their fees at 2020 prices, while four have reduced them.

Ten schools have announced they will raise fees next year, of which just six have locked in above-inflation fee rises.

Australia's highest-fee school, Geelong Grammar, has frozen senior year tuition fees at $42,792. Scotch College led the trend of freezing fees in May when it announced it would keep them at $35,925.

While sure to be welcomed by parents, the cap on fees has also led some schools to attempt to freeze staff wages, a move criticised by the Independent Education Union.

Westbourne Grammar, which has frozen fees at $22,056, failed in its bid to vary an existing agreement with staff.

General secretary of the IEU's Victoria and Tasmania branch, Deb James, said some schools were "in effect passing the financial burden of the fee-freeze directly onto staff".

"While there are certainly many families doing it tough at the moment who genuinely need assistance, an across-the-board fee-freeze seems like a blunt and poorly targeted approach," Ms James said.

She said the union would work with any independent schools that struggled to remain viable if staffing costs increased, but noted others had enjoyed years of surpluses until now.

"This should be an avenue of last resort, particularly after the extraordinary work teachers and support staff in all sectors have put into educating and supporting students throughout this difficult year," Ms James said.

Paul O'Shannassy, managing director of Regent Consultancy, a company that advises parents about non-government schools, said most schools had navigated remote learning and the circumstances of families hit by the downturn responsibly and compassionately, offering fee discounts and deferrals.

"There's an expectation amongst parents that religious schools, particularly Catholic ones, would show compassion in these situations as this is part of their ethos," Mr O'Shannassy said.

But high-fee schools, some of which experienced a steep enough drop in revenue this year to access the Commonwealth's JobKeeper scheme, had to balance the imperative to look after families with their own financial health.

"They are not-for-profits, not charities, and they have fixed costs they have to pay and they have obligations to full-fee paying parents as well, many of whom have been cross-subsiding other parents," Mr O’Shannassy said.

This year's tepid increases are a significant break from recent history. Education is one of the fastest rising components of the consumer price index, says Emma Rowe, a senior lecturer in education at Deakin University.

"The low average increase in private school fees would indicate that it has caused a certain amount of shock for private schools in the wake of the COVID downturn, and they are concerned about loss in enrolment share," Dr Rowe said.

But Independent Schools Victoria chief executive Michelle Green said the economic downturn had not caused a decline in enrolments at non-government schools.

"While comprehensive data won't be available until well into next year, we're not hearing anything from schools to suggest there's any major change in normal enrolment patterns in 2021," she said.

Xavier College is among the handful of schools that will increase fees above the rate of inflation, hiking them 1.5 per cent.

The college has an enterprise bargaining agreement that commits it to a 3 per cent annual wage rise for staff.

It offered two fee rebates to families during the year.

"Families were better looked after with the rebates in financial terms than if we'd gone with no fee increase," a Xavier spokesman said.

"This has been accepted positively by the Xavier community."

Annette Rome, principal of St Margaret's & Berwick Grammar in outer Melbourne, which has frozen fees, said schools "use different data services" to ascertain where the biggest hits to salaries and employment due to COVID-19 had been.

"And, certainly for our area, we are recognising that a lot of parents have found it tough," Ms Rome said.

"We’re hearing it from our parents as well, that they are concerned about 2021, so we are doing what we can to at least give them some surety and hopefully alleviate some pressures."