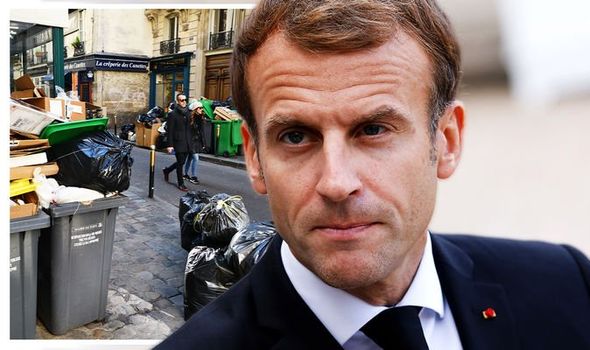 Stéphane Bern, who is said to be close to the French president, has decried the state of the capital, asking in a recent interview: “Where has the City of Light gone?” His remarks follow controversy over the stewardship of the city by socialist mayor Anne Hidalgo, who is also standing for the presidency next year.

Critics claim that she has failed during her term to clean up Paris’s streets.

They have also questioned the creation of new cycled lanes after last year’s lockdowns due to the coronavirus pandemic, which in many places use concrete blocks to demarcate them from motorised areas.

Detractors say these blocks are eyesores – as are the plastic flower pots the local authority would help incentivise Parisians to tend to flowerbeds.

However, it is a plan that has left many unkept.

But Mr Bern responded to these claims: “I hoped that they [Hidalgo and her deputies] would become the defenders of our urban heritage and of trees.

“But there has never been so many trees felled, nor so much concrete.”

Speaking to Le Parisien, Mr Bern said: “I still marvel at the beauty [of Paris] but I deplore that it is letting itself go to a certain extent, and even growing uglier in general.

“Paris has become a rubbish bin where people throw anything away, anywhere and any old how.”

He added that he was upset with “the dirtiness, the holes in the road, the permanent building sites, the noise and especially the violence”.

Recently, Ms Hidalgo commissioned the first Parisian police in 221 years – but did not give them guns like their national counterparts.

“You should hear how people talk to each other,” he said. “Traffic is an incredible source of tension.

Mr Bern told the newspaper that next month he would be leaving his flat in the Pigalle district of the city and would be moving to a disused military school in Perche, northern France, which he bought and renovated in 2013.

He expressed concern over the council’s removal of Paris’s traditional wooden and wrought-iron benches, which were designed by 19th-century architect Gabriel Davioud.

Ms Hidalgo’s administration has been taking them away, according to the Times, because they contribute to a patriarchal society.

The new benches – which are simple wooden slabs and are said to encourage women to sit together – Mr Bern described as “frightful”.

When Mr Macron took office, he gave the conservationist six months to come up with ways of preserving French heritage, which was then taken over by the culture ministry.

One such initiatives included the establishment of a heritage lottery akin to that of Britain’s.

Mr Bern did not attribute all the blame for the state of the capital to Ms Hidalgo, stating: “Those primarily responsible are first of all the users” of the city.

He added: “She’s not the one who gets [Paris] dirty, and it’s not the garbage collectors’ fault.”

However, he called on the mayor: “Dear Anne, awaken the beauty of this city. Restore its prestige, its appeal, its quality of life.”