Next stop – marriage! Moment passenger proposes to his girlfriend in the middle of busy Euston station as information board displays the message ‘Will you marry me?’

As one of the UK’s busiest train stations, Euston seems an the unlikely venue for a wedding proposal – but that’s where one a long-distance couple got engaged.

Nirmal Chohan, 27, from London, got down on one knee on the busy station concourse to propose to long-distance girlfriend Vidya Patel, 26, from Birmingham.

Heartwarming footage shows Nirmal standing next to Vidya and pointing at one of the station information boards, which changed to display the message: ‘Vidya Patel, will you marry me?’ 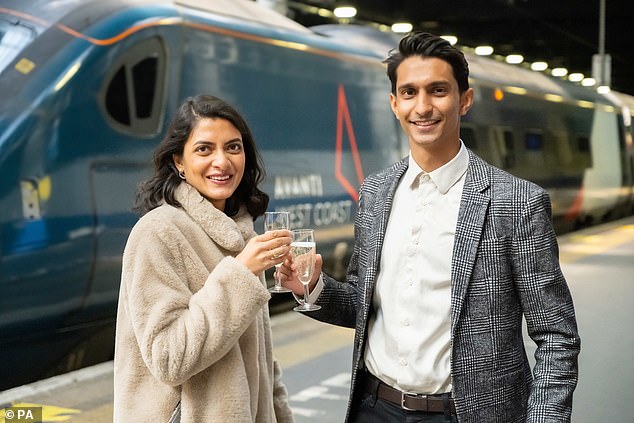 Vidya Patel, 26, from Birmingham and Nirmal Chohan, 27, from London, celebrate after Nirmal got down on one knee on the concourse of Euston station to propose

Family members were in on the surprise and watched the proposal unfold from a hiding place on the station mezzanine before joining the couple to congratulate them.

And after Vidya said yes, the board displayed a message of congratulations to the couple.

Passers-by could be seen watching the proposal as they walked through the busy station, with some stopping to congratulate the happy couple.

Euston station is where the couple, who have been together since they met in 2014, have met up dozens of times, and it played a ‘big role’ in their relationship, said Mr Chohan.

So under the pretence of a usual meet-up, Nirmal greeted Vidya at the station, after she travelled from Birmingham, and proposed under the departure boards. 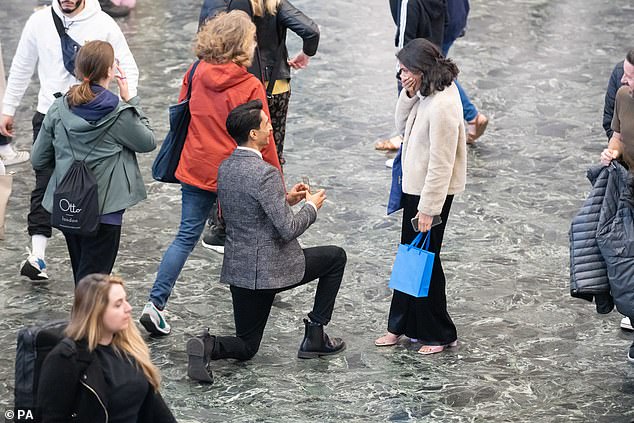 Euston station is a spot where the couple, who have been together since 2014, have met up dozens of times, and it played a ‘big role’ in their relationship, said Nirmal, pictured as he proposed to Vidya 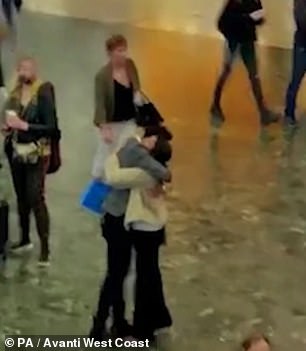 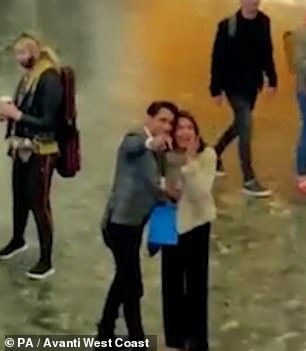 Nirmal greeted Vidya at Euston, the couple’s rendezvous point, who had travelled down from Birmingham for the surprise proposal as loved ones watched from the station mezzanine

Nirmal said: ‘Euston holds a lot of positive experiences, at times it felt like a Bollywood movie, with the hustle and bustle of people, trains left, right, and centre, and then me trying to woo the love of my life.

‘It has been a dream planning this surprise.

‘For the proposal to happen under such circumstances, with both families present, is truly special.

‘The trains and Euston station collectively made the distance in our relationship less of an obstacle, and more a warm, homely location where I knew I’d always get to see her again.

‘We must now move our family planning to the topic of a wedding!’ 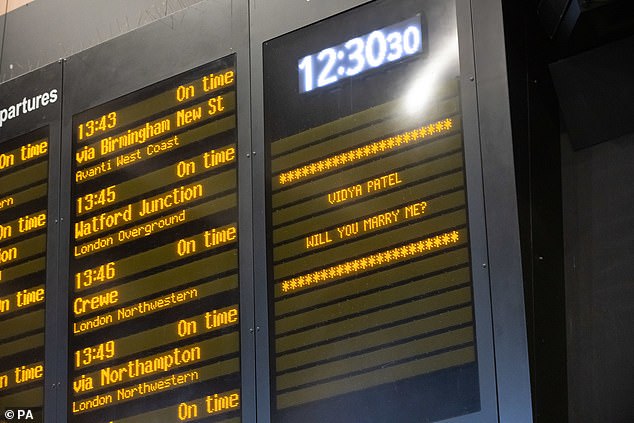 Avanti West Coast and Network Rail were in on the proposal, during which one of the station information boards changed to display the message: ‘Vidya Patel, will you marry me?’

Mr Chohan added: ‘None of this would have been possible without their help, and that of Avanti West Coast and Network Rail, so I’ll always be grateful for this.’

Kathrin Pranga-Wells, Avanti West Coast lead station manager at London Euston, said: ‘When we heard Nirmal’s plans to propose at Euston, we were keen to make it a memorable occasion.

‘It has been exciting to play our part in this special surprise and give a nod to the railway that has connected the couple for years – we loved seeing the joy and excitement on everyone’s faces! 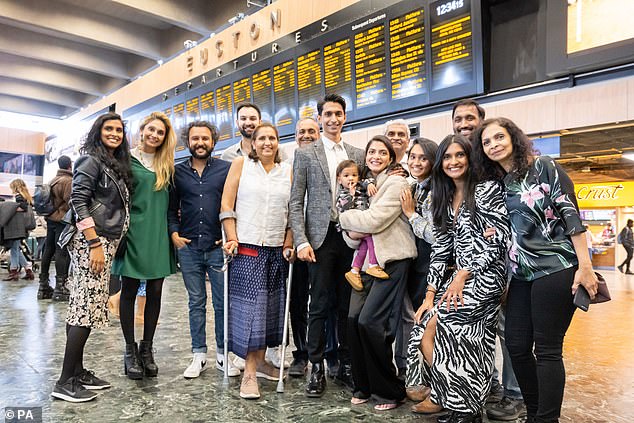 ‘We wish Nirmal and Vidya a happy engagement and all the best for their life together.’

Nicholas Holloway, Communications Manager at Network Rail, said: ‘When we were contacted to support Nirmal make this very romantic gesture at Euston station, we just had to help.

‘We were really pleased to play a small part in Nirmal and Vidya’s story and wish them well for the future.’