AFLW superstar Erin Phillips was one of hundreds of people to flee in fear after a man pulled out a toy gun at a Pride parade in Washington DC on Sunday (AEST), sparking a mass panic.

Phillips tweeted about her experience on Monday morning, saying she "ran and hid with the thousands of others in complete fear". 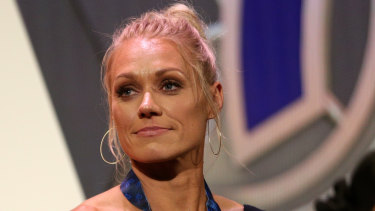 Erin Phillips was part of a crowd panicked by fears of a shooting at a parade in Washington DC.Credit:AAP

"How has the world come to this? The world my kids will grow up in," she added.

Phillips, who is recovering from an ACL injury sustained in Adelaide's AFLW premiership win in March, is working as an assistant coach with the Dallas Wings in the WNBA.

The two-time AFLW best and fairest and her wife Tracy Gahan, already the parents of twins, are expecting their third child.

Aftabjit Singh, 38, was arrested on weapons possession and disorderly conduct charges after the incident in the Dupont Circle neighborhood of Washington, DC, where thousands of people packed the streets to celebrate in the city's annual pride parade.

Although no gunshots were fired, hundreds of people ran from the area, knocking down metal police barricades and running into stores, fearing that a gunman had opened fire on the crowd of revellers.

Seven people were taken to local hospitals for injuries they suffered while fleeing the area, authorities said.

Singh pulled the BB gun on another person who was "hitting on his significant other," according to a police report.

People began running from the area and police officers who were keeping watch over the festivities heard revellers shouting that there was a man with a gun. 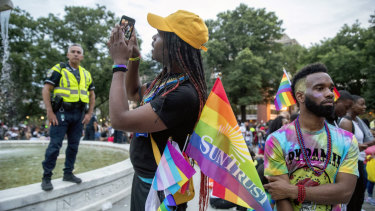 Police watch over the Pride parade in Washington, where a mass panic was sparked.Credit:AP

As the officers got closer, someone in the crowd pointed to Singh and said he had a gun in his bag.

An officer stopped Singh and noticed what appeared to be a silver handgun sticking out of his brown bag that was underneath a tree, the report said. The weapon turned out to actually be a BB gun, police said.

As he was led away in handcuffs, Singh vowed to come back and shoot the person who he had been threatened, police said.

Organisers decided to shut down the parade for the night after the incident but said they would not allow the scare to ruin the weekend pride celebrations.

Elizabeth Hernandez, 19, was among the thousands celebrating when she said she heard "pop, pop" and suddenly barricades were being tossed over and a crowd of people started running frantically from the area.

"Everything fell and everyone said 'run!"' said Hernandez, of Falls Church, Virginia.

She ran down the block and was pushed into a restaurant, where she went into a bathroom with a group of fellow revellers.