Thieves have stolen parts of a jawbone from a dead sperm whale that washed up on a Phillip Island beach.

A Department of Environment, Land, Water and Planning spokeswoman said on Friday the carcass was “disappointingly” interfered with.

The 16-metre carcass has been in a taped-off area of beach on the south coast of the island since authorities became aware of it on March 6. 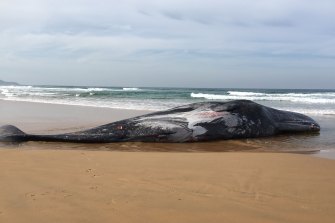 The 16-metre sperm whale carcass which washed up on Sunday at Phillip Island.Credit:DELWP Gippsland

“The incident will be investigated further under the Wildlife Act, as it is an offence for members of the public to interfere, take or be in possession of parts of a dead whale,” she said.

“We will continue to monitor the site as the whale continues to decompose.”

The Organisation for the Rescue and Research of Cetaceans in Australia vice president Jools Farrell said when sperm whale jaws were illegally removed it was often by perpetrators seeking the creature’s ivory teeth.

“They bring in very, very large amounts of money on the black market,” Ms Farrell said.

But she said the thefts were not a regular occurrence because it was rare for sperm whale carcasses to wash up.

“If they do wash up it’s normally because they are sick, old or struck by a ship,” Ms Farrell said.

Authorities left the whale in place to allow it to decompose naturally because machinery or vehicles were unable to access the carcass and towing it out to sea posed navigational hazards.

The department spokeswoman said there was an exclusion zone set up around the carcass.

“Members of the public are reminded it is an offence for people to be within 300 metres of the whale,” she said.

An advice message is in place for Woolamai Beach and Surf Beach, including all coastline between the two beaches, because the carcass has the potential to attract sharks.