My (not-so diplomatic) summit with Donald Trump in Churchill’s War Rooms: PIERS MORGAN tells the rollicking inside story of his world exclusive interview with the US President

Piers, you need to scramble here immediately,’ read the urgent text from my Good Morning Britain deputy editor Winnie Dunbar. ‘Secret Service want us in total lockdown for six hours before the President arrives, or the interview won’t happen.’

When the message arrived on Wednesday morning, I was having breakfast at White City House in West London with my GMB co-host Susanna Reid and some ITV commercial partners, so immediately made my excuses – albeit one of the all-time great excuses: ‘I’m so sorry, but I have to go see the President of the United States…’

A waiting car sped me to the Churchill War Rooms in Whitehall, a few hundred yards from Downing Street, arriving just past the new 10.30am deadline.

I arrived to find eerily empty streets, but a vast number of Met Police officers forming a cordon near the War Rooms, many of them armed to the teeth.

‘You can’t come through,’ said one of them, tersely. ‘We’ve been told nobody is now coming through here. We’re in lockdown.’

‘I’m here to interview the President,’ I replied. 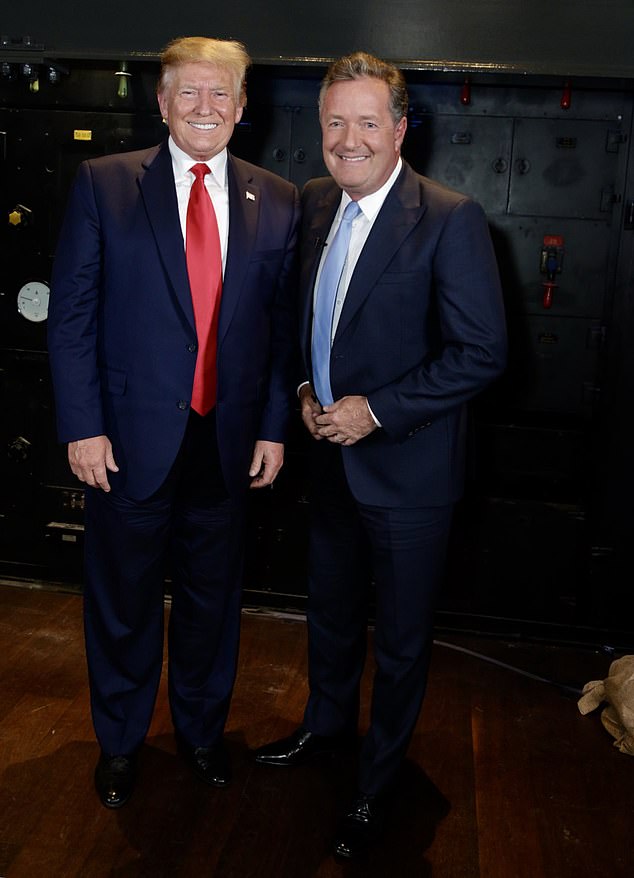 Eventually, after intense discussions between various police chiefs, I was let through. Outside the War Rooms, I was introduced to one of the top men in Trump’s personal Secret Service detail. He looked like an American version of James Bond and was very courteous, but the bone-crushing handshake told its own story.

These guys are the elite of the elite, and wouldn’t hesitate to take a bullet for their president, or put one in anyone who tried to harm him.

‘How long have you been in the Service?’ I asked.

‘Fifteen years. I was on President Obama’s personal detail prior to President Trump’s.’

We chatted for a few minutes, then he reached into his pocket and handed me a large silver coin.

‘These are pretty rare,’ he said.

One side had the American eagle seal, the Latin words ‘E pluribus unum’ (which is the American national motto meaning: ‘Out of many, one.’) and around the edge: ‘UNITED STATES SECRET SERVICE PRESIDENTIAL PROTECTIVE DIVISION.’

On the back were images of the White House and The Beast, the presidential limo.

After a very intense frisking and security check, I walked in. I’d never been inside the Churchill War Rooms before, and they were a stunning sight – a vast underground bunker full of maze-like corridors that exudes incredible history.

They were created in 1938 as war drums began to beat ever louder, became fully operational the week before Britain declared war on Germany in September 1939, and remained active until the surrender of Japan in August 1945.

Everywhere I walked, I saw something fascinating: the War Cabinet room, with Churchill’s seat in the middle, his red briefcase in front; the Map Room, made famous in the movie Darkest Hour, left exactly as it was the day the lights were switched off in 1945, the day after Japan surrendered on August 15; and perhaps the most riveting room of all, the tiny Transatlantic Telephone Room disguised as a public toilet where Churchill would speak on a secure line to President Roosevelt (FDR) in Washington. 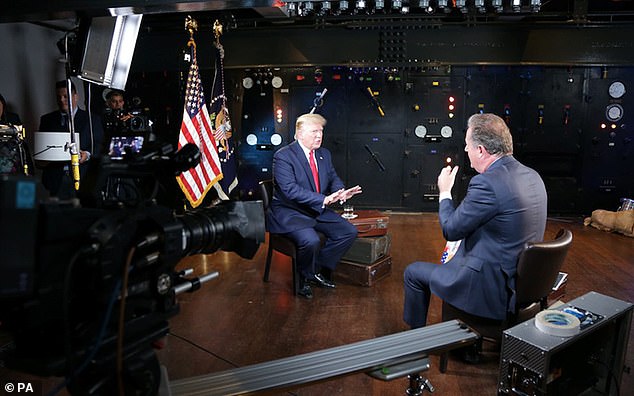 Piers Morgan during his interview in the Churchill War Rooms with President Donald Trump for Good Morning Britain. It is the third time Morgan has interviewed Trump since he was sworn in

The location for our interview was the Harmsworth Room, named after the founders of the Daily Mail, and containing the huge multi-switch generator that once powered the entire bunker.

Once there, I sat with my editorial team watching the President’s movements on TV while our production crew, led by director Erron Gordon, set up the cameras.

As the clock ticked down to our time-slot, so the pace of people and noise in the room and surrounding areas began to increase. There were Secret Service agents everywhere, carefully monitoring every move anyone made.

‘This is the only TV interview he’s doing,’ said Sanders. ‘So make it good!’

‘15 minutes,’ she replied. Pause. ‘But you know how it is with you and the President… so you may get more.’

They gave me some presidential gifts – a White House golf ball signed by Trump, a gold-coloured money-holder with the seal and his signature, and one of the black Sharpie pens he uses to sign stuff.

I watched as Trump and Theresa May held their joint press conference, desperately hoping they wouldn’t be asked the questions I had for him. Fortunately, they kept it short and weren’t. Then they made their way to the War Rooms. 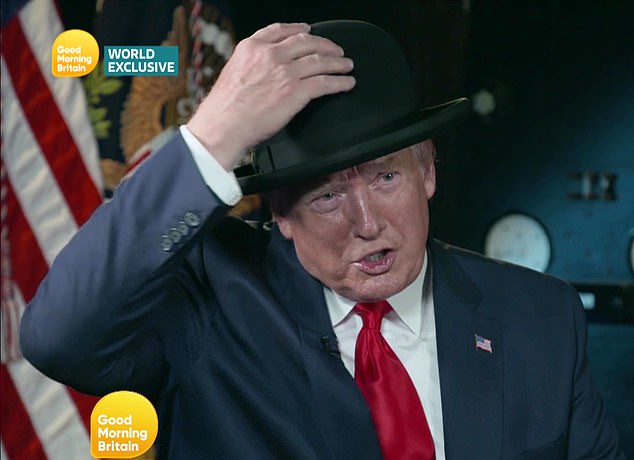 President Trump trying on a gift from Piers Morgan, a Churchill-style hat specially made for him. He said he liked it, but it looked better on Churchill himself

‘Mr Morgan,’ said a Secret Service agent a few minutes later, ‘before the interview starts, the Trump family would like to say hello off camera.’

I followed him out of our room to find Melania Trump standing there with a beaming smile.

I’ve known her for 11 years and she’s always been a very warm, friendly person.

After all the lurid headlines she’s had to endure about her marriage, she exudes an air of remarkable serenity and good-humour whenever I see her, and, as First Lady, she’s barely put a foot wrong and has to rank as one of the most glamorous in US presidential history.

For her first meeting with the Queen, on arriving in the UK on Monday morning, she wore a stunning white Dolce & Gabbana outfit and Hervé Pierre white hat with navy trim. ‘That white dress was fabulous!’ I gushed.

‘Thank you,’ she chuckled, receiving my expert fashion critique with the barely disguised mockery it deserved.

‘She is wonderful!’ Melania replied. ‘It’s been such an honour to spend time with her.’ 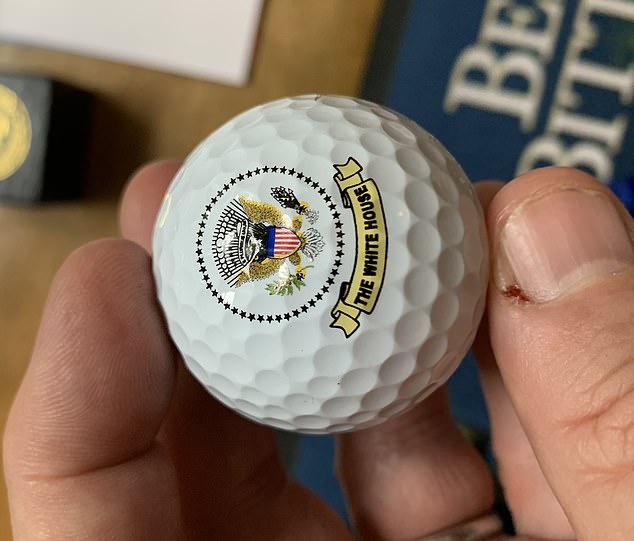 A signed White House golf ball was among the gifts handed over by keen golfer, President Trump

‘PIERS!’ I turned to find a whole phalanx of Trumps – four of Donald’s five children, Ivanka, Don Jr, Eric and Tiffany, and Eric’s wife Lara. I got to know them all well when I competed on Donald’s Celebrity Apprentice show, then regularly appeared on subsequent seasons alongside them as his boardroom advisers.

It was during that time that I forged what has turned out to be a very fortuitous friendship with their father.

‘I’m so glad I decided to enter The Apprentice,’ I said, and they all laughed. ‘I saw you on the Buckingham Palace balcony,’ I told Ivanka, as she kissed me hello. ‘How cool was that? Even I’ve never been up there.’

‘Oh, it was an incredible experience!’ she sighed.

‘This whole trip has been wild,’ exclaimed Don Jr. Even for a family born into huge wealth and privilege, it’s clear that the full pomp and pageantry of a Royal State visit has slightly overawed them all.

‘I found out yesterday that your father watched Queen Elizabeth’s coronation with his mother, your grandmother, when he was six years old,’ I told them. 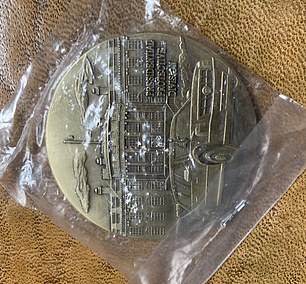 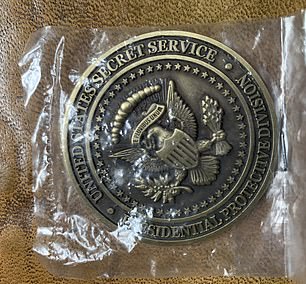 A rare Presidential Protective Division coin given to Piers Morgan, depicting the US Eagle on one side, and The Beast – his bullet proof limo – on the other

‘Yes, that’s why this trip is so special for him, and us,’ said Ivanka.

I felt a hand rap me on the shoulder and turned to see the President of the United States. ‘My man, Piers!’ he said. ‘You’re looking great!’

One of the reasons I like Trump so much is he always tells me I look great. ‘You too, Mr President. You’ve been having one hell of a trip!’

‘It’s been amazing,’ he replied. ‘The Queen has been such a gracious host to us. And now we’re here, in the Churchill War Rooms, where the great man Winston planned how to beat Hitler.

‘I’ve always wanted to see this place and it hasn’t disappointed. I’ve just been in that little room where he used to speak to FDR.’

As I led Trump inside for the interview, I asked how the State banquet had gone. ‘It was a special, special night. Your Queen is a GREAT lady.’

We sat down, Trump checked his face and hair in a mirror, chuckling when I suggested that it was ‘impossible to tinker with perfection’, then he turned to the large group now watching in the shadows and said: ‘I always call Piers my champion because he won Celebrity Apprentice.’

Nobody seemed as pleased as me to hear those words.

The President’s water-man appeared with the special water that travels with him everywhere to stop him being poisoned. 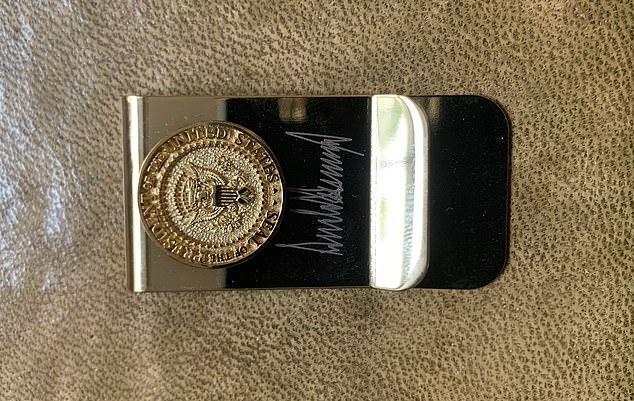 A money holder was also given to Piers. It is inscribed with US President’s signature

I wasn’t allowed to have any, or one of the presidential glasses and paper seal glass mats – ‘It’s all only for the President, Mr Morgan.’

So I placed a Churchill mug by my side instead, emblazoned with the words: ‘You ask, what is our aim? I can answer in one word: VICTORY.’

Trump saw it and nodded, appreciatively. He likes winning, too. The interview was the longest of the three I have done with him (I got 33 minutes in the end) since he became President. And I thought it was the best too, covering a wide range of subjects from the Royals and Iran to guns, climate change and transgender soldiers, and prompting a number of illuminating and newsworthy answers from the world’s most powerful man.

But it was my gift to him at the end that drew the most emotive reaction. It was a replica Churchill black hat, made by legendary London hat-makers Lock & Co.

‘WOW!’ he exclaimed, his eyes lighting up. ‘That’s beautiful! I like it. Thank you Piers, I never knew you had this kind of sensibility!’

He even tried it on.

‘It’s a little big, I think Winston looked much better in this than me…’

This may have been the most surprising moment of the entire interview! Yet it was entirely in keeping with the newfound dignity and respect he displayed throughout his week in the UK, notwithstanding a couple of lapses where he tweeted that London Mayor Sadiq Khan was a ‘stone cold loser’ and Bette Midler a ‘washed-up psycho’.

I think it was the best week of his presidency so far, rounded off with a wonderfully evocative speech on D-Day that had even his most ferocious critics praising him.

Of all the myriad messages I received after the interview aired – attracting the fourth-highest ratings in Good Morning Britain’s five-year history – the one that pleased me most was an email from Newt Gingrich, the legendary former Speaker of the House of Representatives during the Clinton presidency. ‘Your interview with President Trump was tremendous,’ he wrote. ‘It may have been his most presidential tone.’

Viewers can make their own minds up about the first part of that statement, but as for the second, I agree. Donald Trump’s taken a while to get there, but I think my friend’s finally worked out what it takes to be presidential.