A couple has become pen pals with a mystery neighbour thanks to their wandering cat Billy who acted as a postman between the two households.

Cat owner Olga Shipunova, 29, and her partner Zack King, 37, received their first note from their neighbour in Hackney, London, one evening last September.

Billy, the curious one-year-old British shorthair, returned home with a brightly coloured note which had been tucked under his collar and wrapped in cling film. 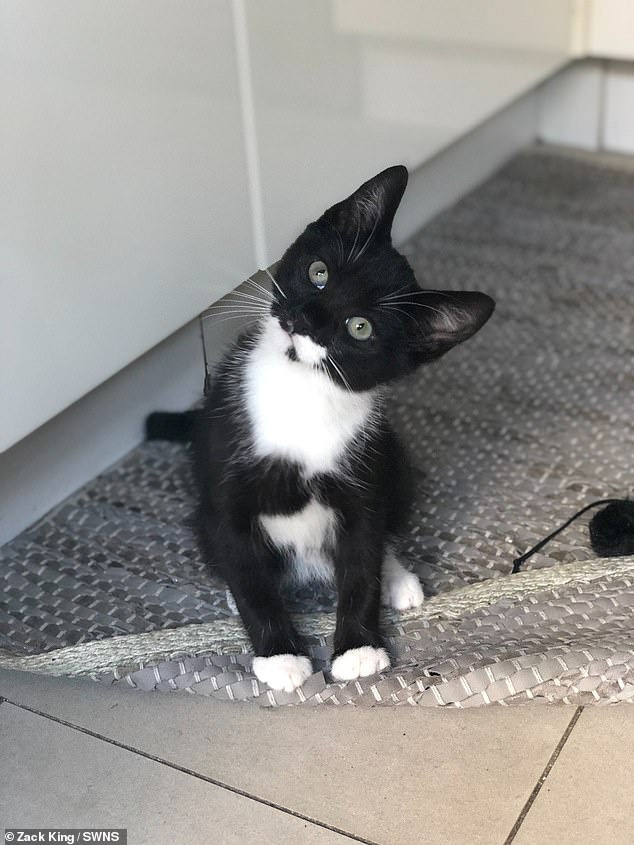 Cat owners Olga, 29, and her partner Zack, 37, became pen pals with a mystery neighbour in in Hackney, London, thanks to their wandering cat Billy who acted as a postman between the two households 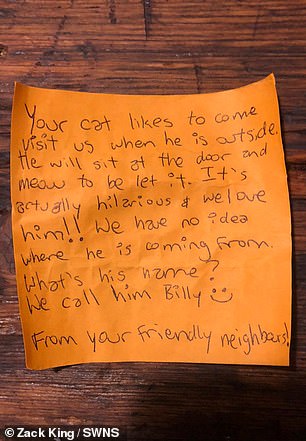 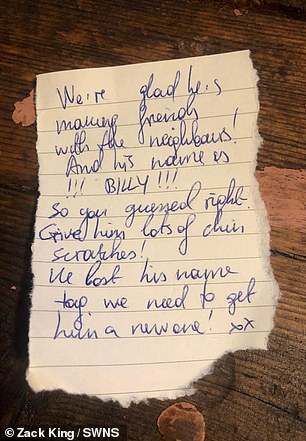 Olga and Zack first received a note from their neighbour last September when Billy returned home with an orange note (left) tucked under his collar. Olga immediately tore off a bit of paper and penned her own reply (right)

The note read: ‘Your cat likes to come visit us when he is outside. He will sit at the door and meow to be let it (sic).

‘It’s actually hilarious and we love him. We have no idea where he is coming from. What’s his name? We call him Billy. From your friendly neighbours.’

Olga immediately tore off a bit of paper from a notepad and penned her own reply which she attached to Billy’s collar and sent him on his way.

The reply read: ‘We’re glad he’s making friends with the neighbours. And his name is Billy. So you guessed right.

‘Give him lots of chin scratches. We lost his name tag, we need to get him a new one.’

It was the first exchange of roughly a dozen messages the furry postie would deliver to the mysterious neighbour over the coming months. 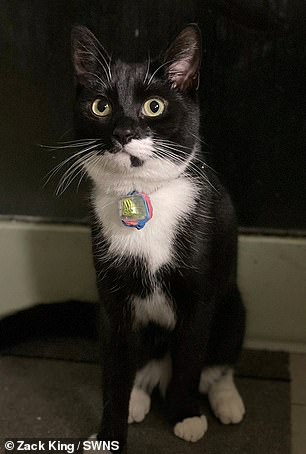 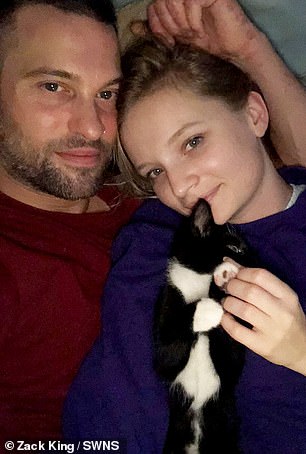 Their mystery neighbour revealed that Billy liked to visit their house and would sit at the door and meow to be let in. Over the following months, Olga and Zack (pictured with Billy, right) began to exchange messages with their neighbour

Olga has said the novel notes were the highlight of her year and added she felt like she had ‘found a friend’ thanks to her cat Billy.

Olga and Zack now look forward to the messages each week which get delivered by their postman cat who diligently does the rounds of their street.

The adorable tuxedo cat has even been fashioned his very own ‘mailbag’ which is a tiny heart-shaped plastic container.

The couple have now been exchanging the little notes with a neighbour for months – but they still don’t know who they are.

They have shared hummus recipes, movie recommendations as well as their favourite podcasts – and for his trouble Billy has been rewarded with many head scratches. 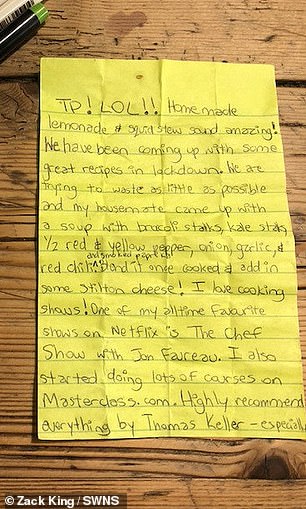 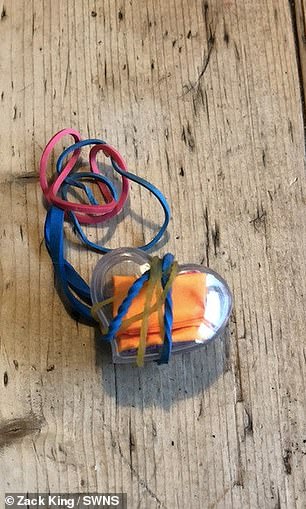 They have shared recipes, Netflix recommendations as well as their favourite podcasts which are diligently delivered by the one-year-old British shorthair in a plastic heart-shaped container (right)

Olga, from London, said: ‘I ended up looking forward to every message.

‘I really didn’t expect it – when he first came home with the note I don’t know why but I thought maybe he broke into someone’s flower pot.

‘But I was so pleasantly surprised when it was this nice note from a neighbour and I feel like we’ve found a friend.

‘The last year has been quite grim and we’re now working from home so I think Billy is a bit surprised by how often we’re here.

‘It’s been great to have such a nice surprise to keep us looking forward to something – and also get Billy out and socialising.’

Olga and Zack adopted little Billy after he was abandoned as a kitten just over a year ago when they moved into their ground floor flat in Hackney, London.

They immediately installed a cat flap so he could roam freely but never expected him to return with a handwritten note.

Olga, an account manager, said: ‘We love the idea he just sits there meowing until he’s let in.

‘We absolutely love Billy and he is a very sociable cat – but we never expected him to come back with a note and definitely not for this friendship to come of it.

‘The letters are just wonderful. In many ways totally inconsequential but really meaningful at the same time.

‘We want to thank the neighbour because this would have never happened with them.’ 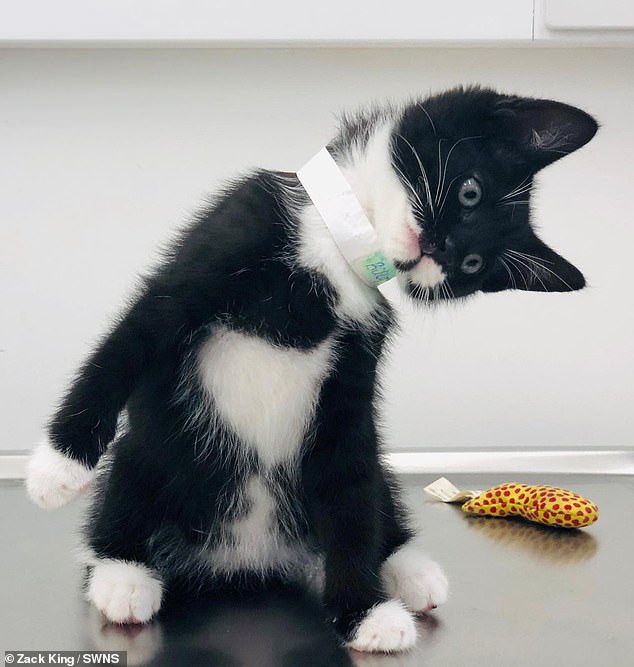 Olga has said the novel notes were the highlight of her year and added she felt like she had ‘found a friend’ thanks to her cat Billy.

Zack said he hopes to continue exchanging the letters but despite being curious feels it’s best the neighbour remains anonymous.

The advertising strategist said: ‘It would be nice to know who she was, but there’s no need – it’s quite nice the way it is.

‘You lose a bit of the mystery. I like not knowing where he’s off to but it’s nice to know he’s visiting someone who is kind to him.

‘We know they’re Canadian and that’s about it. We never expected it to spiral into this friendship but it’s been truly lovely.’

The couple said they’ll keep exchanging the ‘lovely notes’ as long as they receive them and look forward to the next one.