Princess Charlene of Monaco offers to mediate in family dispute… of Zulu rulers: Royal steps in amid rumours of her own troubles with Prince Albert

Princess Charlene of Monaco has offered to mediate in a family dispute between the Zulu royals, despite rumours of her own troubles with Prince Albert.

The former Olympic swimmer has urged the Zulus to end their succession battle ‘for the sake of unity,’ according to South Africa’s national broadcaster.

Charlene, 43, has spent most of the year in her native South Africa, sparking rumours of a rift with her husband of ten years, Albert, 63, with whom she has two six-year-old twins.

A personal friend of the late King Goodwill Zwelithini, Charlene attended his funeral sat among his wives and children in their ancestral lands at Nongoma, later describing her ‘many special moments of the years’ with the monarch.

A bitter war of succession has followed the end of Goodwill’s 50-year reign, including sensational allegations of poison plots and a forged will, between the feuding relatives. 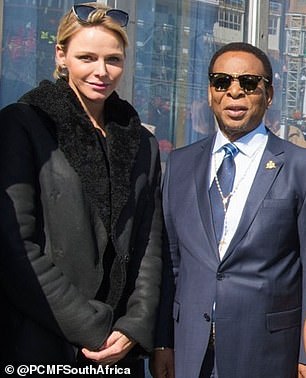 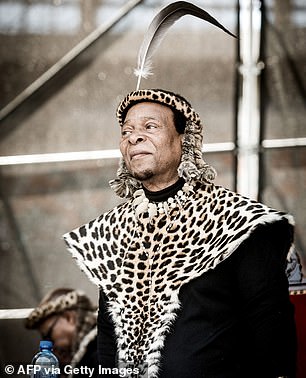 A personal friend of the late King Goodwill Zwelithini , Charlene attended his funeral sat among his wives and children in Kwa Zulu Natal, later describing her ‘many special moments of the years’ with the monarch (pictured: together, left, and the king during a ceremony in Durban in 2018, right) 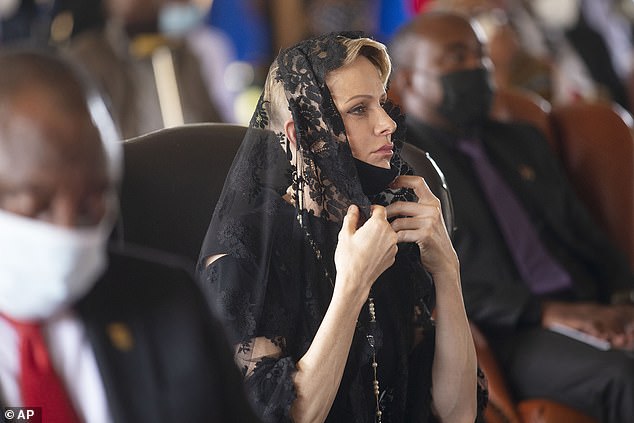 Prince Misuzulu Zulu, the eldest son of the late leader, was named the heir but some family members have rejected his claim to the throne.

Charlene was last seen in Monaco in January and has been back in South Africa since at least Goodwill’s funeral in March.

She says a sinus infection following dentistry has prevented her from flying home, but her prolonged absence from her husband and their young children has fuelled rumours of a split.

Last month, she collapsed at her lodge ‘due to complications from the severe ear, nose and throat infection she contracted in May.’

Prince Albert was finally reunited with his wife at the end of August after he flew out to South Africa with their children, Prince Jacques and Princess Gabriella.

But photographs of the pair embracing were branded ‘awkward’ by a body language expert.

In his first interview since returning from visiting his wife in South Africa, Albert told People magazine on September 2: ‘She’s ready to come home.’

‘She didn’t leave Monaco in a huff! She didn’t leave because she was mad at me or at anybody else … She didn’t go into exile. It was absolutely just a medical problem which had to be treated,’ Albert told the magazine in a separate interview.

Charlene posted a photograph on Monday of herself smiling in front of a bible in her first picture since being discharged from hospital.

The royal, who was born and raised Protestant but converted to Roman-Catholicism ‘of her own free will and choice’ before her wedding in 2011, simply captioned the post, ‘God Bless,’ followed by a heart emoji.

It comes just days after Charlene released a stylish video promoting her anti-poaching campaign from her South African bolthole – after missing a No Time To Die screening in Monte Carlo with Albert.

Charlene is not expected to return to her husband’s principality until October after experiencing complications related to the sinus lift and bone graft procedure she’d undergone before her trip for dental implants, according to People. 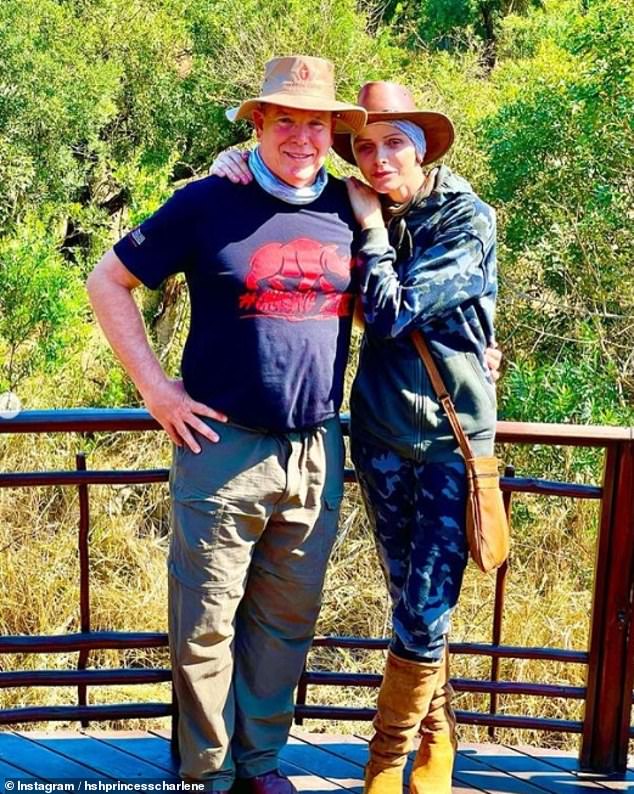 Charlene, who was last seen in Monaco in January, shared professional photographs of a reunion with her family on Instagram last month (pictured 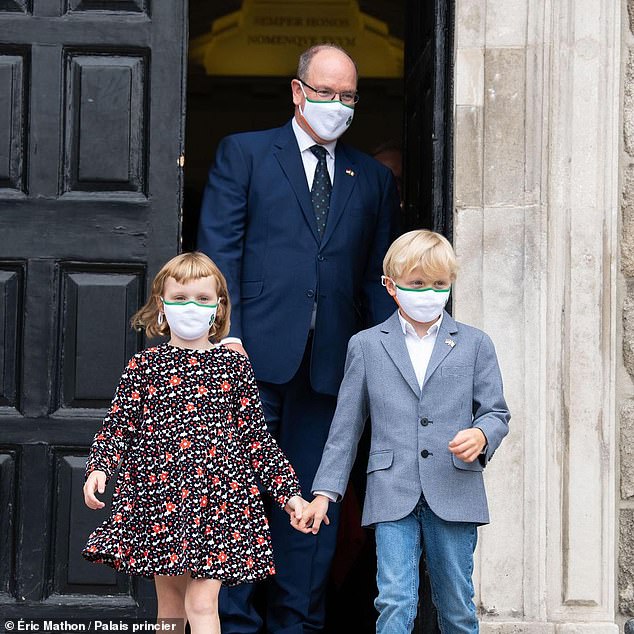 On Friday September 3, Prince Albert (pictured with his children) was joined on the red carpet by actress Sharon Stone, 63, for a first look at the eagerly anticipated James Bond release – Daniel Craig’s fifth and final outing as the iconic secret agent 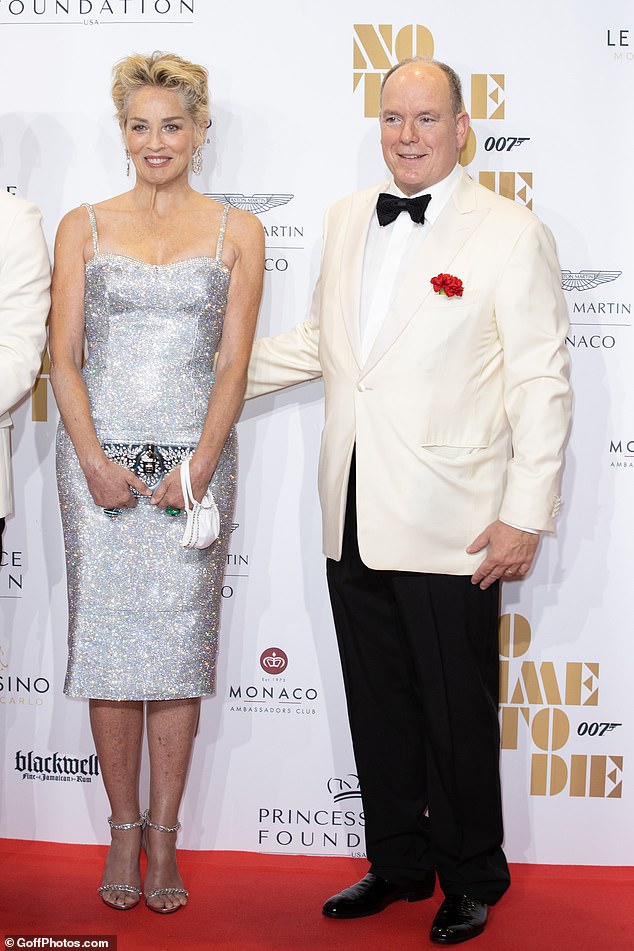 On Friday 29th September, Prince Albert (pictured right, with Sharon Stone), 63, attended a charity screening of the new James Bond film at the Monte Carlo Opera, in his latest in a string of public appearances without his wife 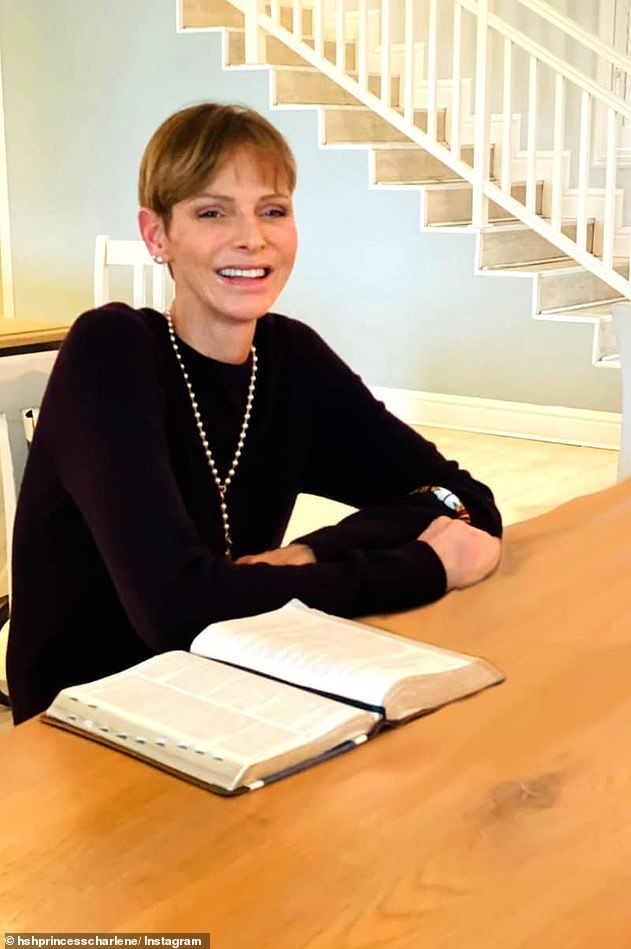 The mother-of-two has apparently since had several corrective procedures – including one in late June that resulted in her missing her 10th wedding anniversary on July 1 and a four-hour long operation on August 13.

On September 1, Charlene was admitted to a local hospital after suddenly ‘collapsing’.

She was later released but doctors are ‘still establishing exactly what happened’, according to a statement from Chantell Wittstock, director of the Princess Charlene of Monaco Foundation.

The mounting speculation about the couple’s marriage comes after Charlene shared professional photographs of her reunion with Albert, saying she was ‘thrilled’ to have her family back.

She shared a series of photos cuddled up with her kids in South Africa with the caption: ‘I am so thrilled to have my family back with me (Gabriella decided to give herself a haircut!!!) Sorry my Bella I tried my best to fix it,’ referring to her daughter’s choppy fringe.

However a body language expert told FEMAIL Charlene showed ‘no emotional bond’ towards her husband Prince Albert in the images.

Judi James said that rather than being the loved-up reunion photo one would expect of a couple surrounded by split rumours, the royals’ poses suggested ‘no signs of connection between awkward-looking Albert and Charlene’.

January 27 – Charlene is pictured with Albert for the Sainte Devote Ceremony in Monaco.

March 18 – Charlene is pictured at the  memorial for the late Zulu monarch, King Goodwill Zwelithini at the KwaKhethomthandayo Royal Palace in Nongoma, South Africa

April 2 – Charlene posts an Instagram picture of herself, Albert and their twins Jacques and Gabriella for Easter.

It is unknown where the image was taken.

May 8 – Albert, Jacques and Gabriella attend a Grand Prix event in Monaco without Charlene

May 10 – Albert attends Monaco Gala Awards in Monaco without Charlene

June 3 – New photos emerge of Charlene on her conservation trip

June 24  – Charlene’s foundation releases a statement saying the royal is unable to travel and is undergoing procedures for an ear, nose and throat infection

July 2 – Charlene and Albert mark their 10th anniversary separately. ‘This year will be the first time that I’m not with my husband on our anniversary in July, which is difficult, and it saddens me,’ Her Serene Highness Princess Charlene said in a statement.

July 3 – Albert appears with glamorous niece Charlotte Casiraghi  at the 15th international Monte-Carlo Jumping event, which is part of the Longines Global Champions Tour of Monaco,

August 13 – Charlene undergoes a four-hour operation. The reason is not announced

September 2 – She is discharged, with a statement from the Palais Princier reading: ‘Her Highness is closely monitored by Her medical team who said that Her condition was not worrying’